One minute and nine seconds. That’s the length of the inciting video published this morning by right-wing activist Ronen Shoval. In less than a minute-and-a-half, Shoval manages to sum up all the reasons why an Israeli court deemed it okay to call “Im Tirzu” — an organization he founded — a “fascist” group.

The video is part of a campaign by the group against foreign governments “planting” activists and groups belonging to Israeli civil society. It begins with a clip of a Palestinian man moving his knife toward the camera, as if he is trying to stab the viewer himself, while horror film music plays in the background. The video then goes on to accuse four Israelis who work for human rights organizations — Breaking the Silence’s Avner Gvaryahu, Hamoked’s Sigi Ben Ari, Ishai Menuchin of the Public Committee Against Torture in Israel, and B’Tselem’s Hagai El-Ad — of being “planted.”

But not only are the four named, the video also shows their photos. After all, nothing gives incitement its edge more than putting a face to the name. As if this wasn’t enough, the video ends with the following words: “Ishai, Avner, Sigi, and Hagai are Israelis. They live here with us, and they are planted. When we fight against terror, they are fighting against us. The foreign implant law can help us outlaw them. Sign it.”

Things I learned from the Weimar Republic

The enemy is no longer comprised of various anti-Israel groups. The enemy now has a name, his face is out in the open; these are the people fighting against us from within. These four are now connected to the knife-wielding Palestinian. They are the knife stabbing us in the back. 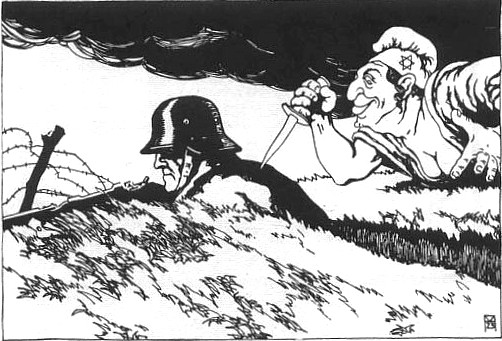 An illustration from a 1919 Austrian postcard showing a caricatured Jew stabbing the German Army in the back with a dagger. The capitulation was blamed upon the unpatriotic populace, the Socialists, Bolsheviks, the Weimar Republic, and especially the Jews.

After watching Shoval’s video I immediately looked up the Hebrew Wikipedia entry for what was known as the “stab-in-the-back myth.” According to the myth, Germany’s loss in World War I came as a result of treasonous activities by Jews, Marxists, freemasons, and others who stabbed the nation in the back.” I also learned that “most of the German people accepted the myth as fact, and that placing the blame on Jews and Marxists for the German defeat became commonplace. Moreover, the myth was convenient in that it served certain psychological aspects of German society, at a time when powerful forces left over from the era of German Emperor Wilhelm II still strived for territorial expansion and had militaristic ambitions. Far-right völkisch parties made use of the myth, and after the Nazis came to power in 1933, the myth won official government support and became part of Germany’s history curriculum.”

Shoval’s video has been panned on his Facebook page by left and right wingers alike — the latter including people who thought he went too far. I assume that those same people — on both the Right and the Left — would be far less horrified to find this kind of video on the Facebook page of rapper and far-right activist Yoav Eliasi, also known as “The Shadow.” After all, Eliasi is an expert at putting left-wing individuals in the crosshairs in order to sic his followers. But while it is easy to paint Eliasi as an unconstrained, barbaric, and violent, the same cannot be said about the congenial Ashkenazi doctor who comes from a good home. The kind who is invited as a legitimate guest on panels, the chairman of some insane department that has something to do with professors and “national resilience.” We prefer their racism “cleaner” and more respectable. We like our incitement quiet and efficient, not vulgar. 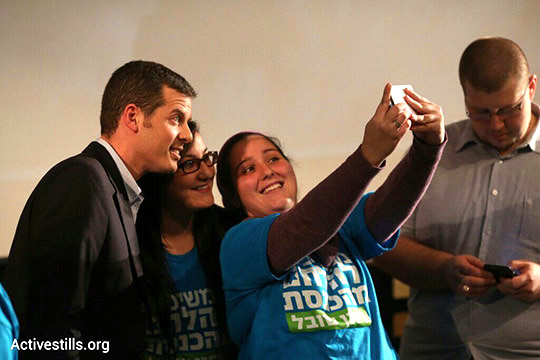 Jewish Home supporters take a selfie with candidate Ronen Shoval during the run-up to the 2015 elections. (Activestills.org)

Ronen Shoval was a realistic candidate for the right-wing Jewish Home party. Along with Justice Minister Ayelet Shaked, Shoval was supposed to present the young, secular, “normal” face of this extremist party. The way to curry favor among young, secular Tel Avivians alongside its settler electorate. The same party that kicked out former soccer star Eli Ohana for being too “barbaric” accepted this inciting, violent man in order to open the party to new groups.

We must remember that it is only by chance that Shoval is not in the Knesset today. Meanwhile, he receives the quiet support of the fascistic ruling class, and continues to do the dirty work that he would have had trouble doing from inside the Knesset. His friends in the parliament will already know how to turn the violent public atmosphere against the Left into additional anti-democratic laws. Meanwhile, instead of discussing incitement and those who fuel it, the public is busy deliberating the legitimacy of Breaking the Silence and other human rights organizations in Israel.