Just weeks after it was deemed to have ‘fascist characteristics,’ nationalist group Im Tirtzu tries to shut down Zochrot for allegedly ‘rejecting the existence of the State of Israel.’ 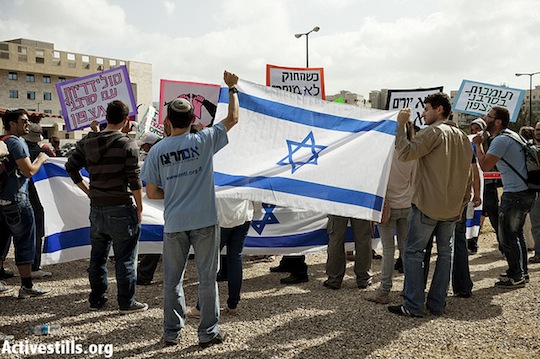 Right-wing group Im Tirtzu is attempting to shut down Zochrot, a non-profit organization that dedicates itself to raising awareness of the Nakba in Israeli society, and working toward the return of Palestinian refugees who fled or were expelled by Israeli forces in 1948.

According to Zochrot’s website, the group’s aim is to “promote Israeli Jewish society’s acknowledgement of and accountability for the ongoing injustices of the Nakba and the reconceptualization of Return as the imperative redress of the Nakba and a chance for a better life for all the country’s inhabitants.” The organization’s stated purpose is to “create the conditions for the Return of Palestinian Refugees and a shared life in this country.”

In his letter, Shoval states that Zochrot’s support for Palestinian return is “unequivocal.” According to Shoval:

Zochrot acts…to dismantle the State of Israel as a Jewish-democratic state. They seek to eliminate its Jewish character through putting the Palestinian claim for return into action and the flooding of Israel with millions of Arabs, and they will destroy its democratic character, simply because the Muslim political tradition is not democratic. A majority Arab rule in Israel means the elimination of democracy. Under Arab rule, we will see the same kind of human rights and democracy as in Syria, Egypt and Saudi Arabia.

This isn’t Im Tirtzu’s first confrontation with Zochrot; just last month the group attempted to shut down the annual Zochrot conference, to be held at the Eretz Yisrael Museum in north Tel Aviv, on the former site of the Palestinian village Al-Sheikh Muwannis.

Despite Im Tirzu’s attempts to erase the issue of Palestinian refugees from the daily agenda, it will remain part of the public discussion, as will Zochrot’s conference on September 29-30 in the Eretz Yisrael Museum in Tel Aviv on the responsibility of the Israeli public to undo the wrongs of the Nakba and to implement the return of the refugees. The real danger we should be worried about is from anti-democratic groups, which have recently been deemed to have fascist characteristics, and who try to undermine the democratic nature of society through bullying tactics.