MK Michael Ben-Ari (National Union), who recently chose Col. Shalom “Rifle-butting” Eisner as his man of the year, is now inciting to violence. After the attack by militants that killed an IDF soldier near the Egyptian border on Saturday, he suggested killing the “infiltrators” with a bullet to the head. This, according to Ben-Ari, because the terrorists waited for the soldiers to give the refugees water. The IDF denies [Hebrew] Ben-Ari’s claim, saying the incident has nothing to do with refugees. Despite the military’s refuting Ben-Ari’s claim, the Foreign Ministry is still holding fast to the false water story.

Now it’s clear, the IDF inquiry determines: the terrorists waited for the soldiers to give the infiltrators water and then they shot them!

The conclusion that should have been reached long ago:

Infiltrators who want water should go drink in Sudan or Egypt, whoever approaches the border, will get a bullet in the head, this is the only way we’ll save the lives of our children and guard our borders! 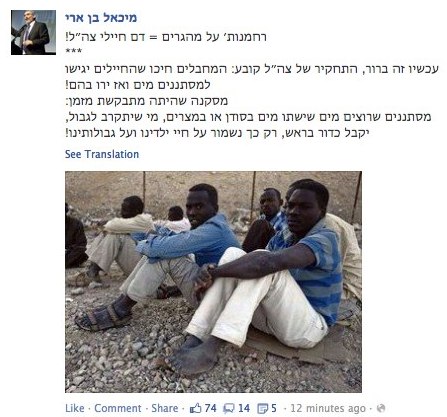