Are you an IDF soldier? Are you also right-wing? Would you like to sabotage IDF jeeps, communication systems and other gear to prevent the demolition of illegal outposts? Here’s how!

The right-wing news portal The Jewish Voice (tagline: News for Happy Jews”) has published a pretty useful list of ideas for pro-settler soldiers to sabotage army gear, vehicles, communications and so on and so forth (see below), to upset the army’s operations to evict illegal outposts in the West Bank. The fact they couldn’t care less that the gear they’re sabotaging is there, ostensibly, for their own protection, goes without saying. A similar attack was already carried out some months ago.

In a rather strange attempt to avoid prosecution, the author, one Boaz Albert, wrote the guide in the negative. Though our country is full of surprises, Albert is not very likely to be prosecuted –  not because of his cunning, but simply because he’s of the right ethnicity and persuasion, as the IDF itself pointed out hours earlier. Here is the entire thing:

Tips for the Jewish soldier: “How you can ensure the destruction operation succeeds” *

These days, as the army is preparing for the ever-so-important and necessary mission of laying ruin to communities and outpost, it is particularly important no small mistakes occur to put the entire thing at risk. As we know, “a battle was won because of one small nail”, and sometime meticulousness is called upon. I’m sure that you, too, are personally concerned with the success of the operation. After all, it is precisely to take part in these kinds of operations that you joined the army and underwent all this training in the first place. What follows are a few bulletpoints. Keeping them in mind will preserve your unit’s operational ability to carry out the essential activity of demolishing homes determinately and effectively.

1. Every day, dozens of vehicles move across the base on which you serve. The condition of their wheels is essential for the success of the operation. Extra care should be taken to ensure these wheels aren’t accidentally damaged by sharp tools you can find pretty much everywhere (like a Leatherman multi-tool), as it does sometime happen. It is important to keep the roads of the base and the dirt tracks clear of screws and nails (they say sharp screws are the worst), otherwise flat tires could occur just in the most important moment.

2. Every vehicle has a starter switch. Keeping it clean is essential for operating the vehicle. It’s very important no toothpicks or wood chips get stuck in the starter, or that it doesn’t get filled up with glue. Otherwise the vehicle will be rendered immobile when the time comes, and everything will be spoiled. You wouldn’t want to be spending the day at a munitions workshop instead of taking active part in the operation just because of a little carelessness on your part.

3. Communications systems are essential for the radio system and the internet. You should ensure they are intact and operational, especially ones serving war rooms and outlooks assisting the operation. Sending back clear reports to the war room is also, of course, an important condition for the operation to succeed. Without communications and without cooperation with the war room, your commanders will not be able to integrate in the mission, and you and your friends will probably be very upset.

4. The engines of vehicles, especially armoured vehicles, are highly sensitive to sand or sugar. The same is even more true about the vehicles’ oil and gas tanks. Carelessness about that could do serious damage to the unit’s ability to carry out destruction, just because of a little inattention, wouldn’t it be a pity?

5.  Writings on the walls of the base criticising commanders who send their soldiers on inappropriate missions, like “Shame on you, Division Commander Ephraim”, seriously damages morale and discipline and could get unruly soldiers to feel unnecessary pangs of conscience, and to damage the unit’s ability to live up to its important mission.

6. Punctuality, determination when confronting civilians, and documenting any violation of the law by the settlers will do much for the success operation and for bringing the settlers to trial and to jail. It’s very important all documentation is carefully preserved and undamaged. The disappearance of cameras and documentary material would directly impact the rendering of justice to those who have the nerve to oppose the demolition of their homes.

7. Information on forces and movements can leak out and ruin everything. If the settlers were to receive from you the itinerary of the operation and other details they could use to prevent the demolition of their homes, which will undoubtedly cause you great distress.

This is it in general. If you invest just a little extra effort I’m sure you can find more areas in which perfectionism will increase the chances of the operation’s success.

Update 22:00 The Jewish Voice has removed the page, but here’s a screenshot: 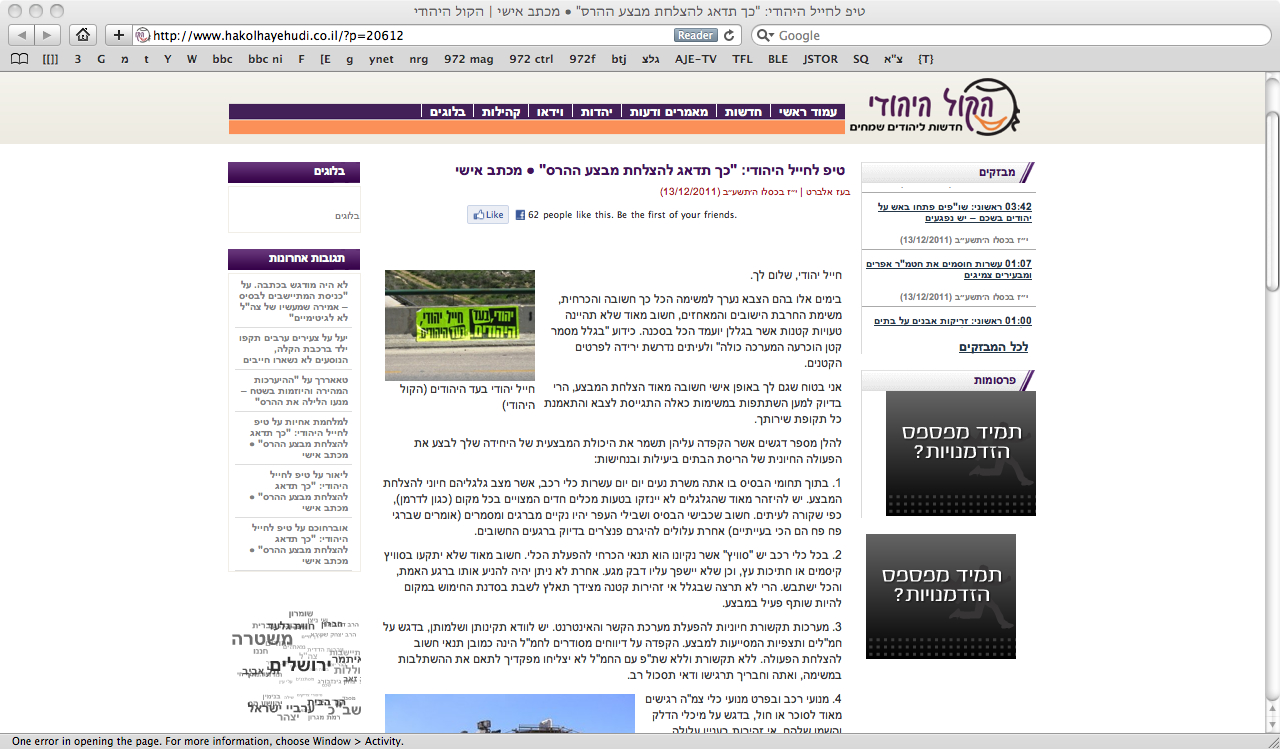