Right wing agitators led by Knesset member Michael Ben-Ari (National Union) marched through Jaffa this morning in an act of provocation supported by 1000 police and border police officers. Almost at the same time, settlers attacked Israeli soldiers near the outpost of Havat Gilad as the outpost was being destroyed. Why the sudden spike in settler violence and provocation? 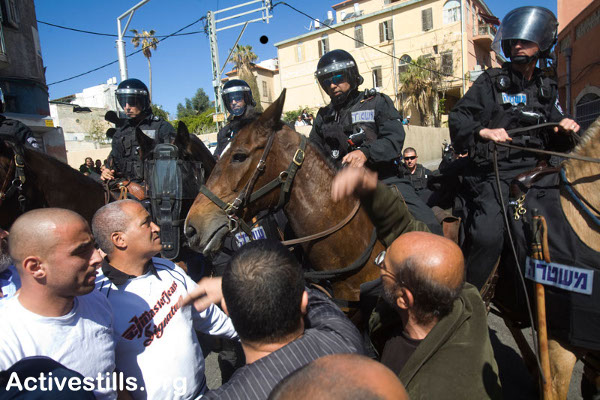 Right wing activists including Baruch Marzel and Itamar Ben-Gvir marched through Jaffa. The purpose of the march, according to MK Michael Ben-Ari, was to remind residents that the city is part of Israel and against the Islamic movement’s January march in the city. Unlike the Palestinian march, 15 people were arrested and one border police officer was injured amid violent clashes.

As the march was creating headaches for Israeli police in Jaffa, settlers were attacking Israeli soldiers near the outpost of Havat Gilad. Israeli soldiers, on orders to remove the settlers from the illegal outpost, were attacked with stones and responded by shooting plastic bullets. MK Michael Ben-Ari denied claims that the soldiers had thrown stones on Reshet Bet (HEB). He said that no photographic evidence is available and so the event did not happen. Sadly, this line of defense will likely hold up if any criminal case is opened against the settlers.

Why have Israeli authorities, out of nowhere, decided to ‘destroy’ an outpost that was known to be populated by extremist and violent settlers? A violent cocktail of attacks against Palestinians (so called “price tag” attacks) and extremist rhetoric against the state is an absolute certainty when destroying an outpost like Havat Gilad. Why unleash this now?

The historic developments in Egypt might be one motivation. Recently, a number of events taking place in Egypt have been given little media attention in Israel. The Rafeh border between Gaza and Egypt has remained open since Mubarak has stepped down, Iranian ships have crossed the Suez canal for the first time since 1979 and the north Sinai gas pipeline from Egypt to Israel –which was destroyed weeks ago– has not resumed gas transfer between the two countries. Aside from the Iranian ship story, the events have not been given prominent attention in Israeli media and press.

Unleashing the convenient right wing settler animal through the destruction of extremist outposts in the West Bank is a great way to ensure that the public will focus on internal instead pf external political matters. Allowing a provocative settler march to take place in the heart of Jaffa’s gentrified areas is another brilliant way to clog the headlines with stories that have nothing to do with Egypt or the Arab world. Perhaps this is all a coincidence but it seems unlikely. While the Israeli government does not usually make wise decisions, it does not make haphazard ones.