The Israeli army is preventing search and rescue teams from entering the Gaza buffer zone to retrieve the bodies of Palestinian militants. Rights groups: ‘There is no way to justify the severe and intolerable harm to the lives and dignity of the trapped individuals.’ 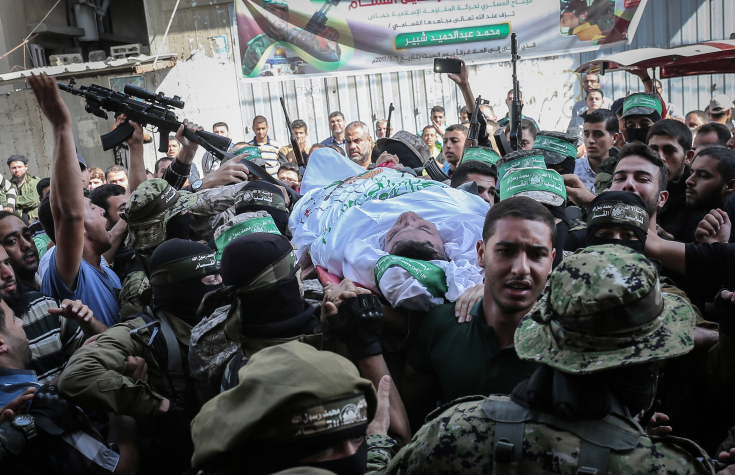 Fighters from the Qassam Brigades, the armed wing of the Palestinian Hamas movement, carry the body of 30-year-old Maslih Shabir in Khan Yunis, in the southern Gaza Strip, during the funeral of Palestinians who were killed the previous day in an Israeli operation to blow up a tunnel stretching from the Gaza Strip into Israel, October 31, 2017. (Abed Rahim Khatib/Flash90)

Rights groups are demanding that the Israeli military allow search and rescue teams access to an Israeli-imposed no-mans-land along the Gaza border to rescue Palestinian militants trapped in a tunnel destroyed by Israel earlier this week.

Adalah – The Legal Center for Arab Minority Rights in Israel and the Gaza-based Al Mezan Center for Human Rights filed a petition Thursday night to the Israeli Supreme Court on behalf of Gaza resident Hassan Abdel Jalil Sbahi, the father of one of the missing individuals. A hearing is scheduled for Sunday of next week.

On October 30, the Israeli military destroyed a cross-border tunnel along the Gaza border area, killing five top members of both Islamic Jihad and Hamas. According to a senior Israeli officer, the IDF knows of 14 people killed in the incident, five of them operatives who worked in the tunnels, as well as nine rescuers who died either due to the tunnel’s collapse or from inhaling smoke from explosives.

The army claims the tunnel had been dug from the Gaza Strip and into Israeli territory, close to Kibbutz Kissufim. Palestinian rescue crews have so far recovered seven bodies and evacuated 18 people wounded in the blast.

In the petition, the rights groups argue that “protecting the wounded in times of war and the duty to allow them to receive medical treatment, the evacuation of bodies, as well as the immunity of ambulances, hospitals and medical teams, are fundamental principles of international humanitarian law and the Fourth Geneva Convention.”

According to the army, Israel will not allow Palestinians to search for the remaining missing Palestinians unless progress is made on returning the missing Israeli soldiers who were captured during the 2014 Gaza war, and are long-assumed to be held by Hamas in the Gaza Strip. 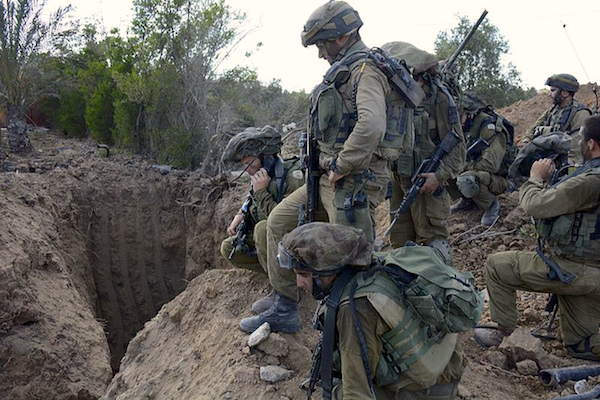 Adalah attorney Muna Haddad called on the court to hold an urgent hearing. “Preventing the location and rescue of missing persons in the area currently under Israeli military control is a blatantly illegal policy,” Haddad wrote in the petition, calling the act “contrary to the laws of war and humanitarian law which are anchored in the Geneva Conventions.”

The petitioners argued that “protecting the wounded in times of war and the duty to allow them to receive medical treatment, the evacuation of bodies, as well as the immunity of ambulances, hospitals and medical teams, are fundamental principles of international humanitarian law and the Fourth Geneva Convention.”

Israeli human rights organization B’Tselem also criticized the IDF’s decision, calling it “vengeful” and “immoral,” while criticizing Hamas for refusing to return the bodies of Israeli soldiers captured during the 2014 Gaza war.

The petition further stressed that the army is using the trapped Gazans as bargaining chips:

“[Mordechai and Zamir] are seeking to use the trapped people, and the possibility of locating and rescuing them, as a bargaining chip – something that this court has already ruled impermissible. There is no way for them to justify this most severe and intolerable harm to the lives and dignity of the trapped individuals.”