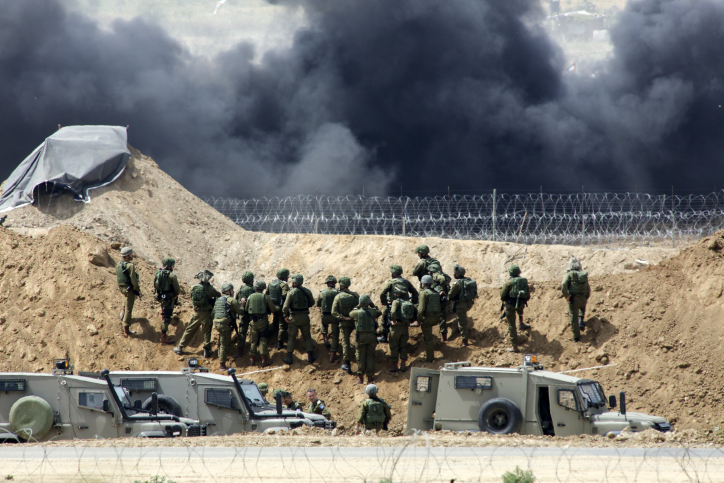 Palestinian protesters demonstrate and burn tires near the border with Israel in the Gaza Strip, as seen from the Israeli side, April 13, 2018. (Sliman Khader/Flash90)

After three weeks in which Israeli army snipers have killed dozens and wounded well over 1,200 protesters inside the Gaza Strip, four prominent human rights organizations petitioned Israel’s High Court of Justice on Sunday, demanding that the court order the state to revoke the rules of engagement that permit shooting demonstrators who pose no danger to human life.

The overwhelming majority of those who were killed and wounded by Israeli forces over the past three weeks were unarmed participants in the “Great Return March,” a 45-day series of festivals and protests set to culminate on Nakba Day in mid-May.

The rights groups asked the court for an urgent hearing — before this Friday’s protests.

The rules of engagement that the army has applied to  Gaza permit soldiers to shoot live rounds at demonstrators who are classified as “central inciters” or “central rioters” — regardless of whether they actually endanger human life, according to the petition. Moreover, the regulations allow soldiers to shoot demonstrators who get too close to the border fence, even if they are not posing a danger to anyone.

At least six Palestinian journalists were reportedly among those shot at the Great Return March in recent weeks. One of them, Yasser Murtaja, a photographer for “Ain Media” who was wearing a helmet and vest clearly marked “PRESS” when he was shot, later died of his wounds.

The four Israeli human rights organizations behind petition, the Association for Civil Rights in Israel (ACRI), Yesh Din, Gisha, and Hamoked: Center for the Defence of the Individual, argued that there is no prohibition on holding demonstrations in Gaza, and that violence or attempts to cross the border fence should be seen as civil disturbances — not armed warfare. Therefore, the demonstrations are not subject to the laws of war and they do they justify use of live fire.

Michael Sfard, one of several attorneys behind the petition, told +972 Magazine that while he had previously filed petitions regarding the army’s use of live fire, those cases were always done after the fact. The current petition is markedly different, he explained, in that it seeks to affect army policy in real time rather than retroactively. 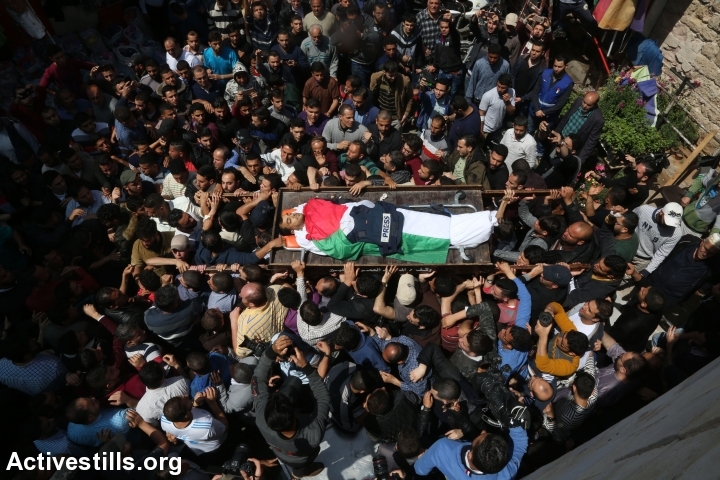 While the IDF’s open-fire regulations are not publicly available, the army’s actions at the border and statements made by top commanders formed the legal basis for the petition.

Despite international criticism and calls for an independent investigation into the killings, Israeli authorities have doubled down on the decision to open fire on unarmed protesters. In a newspaper ad campaign published earlier this month, human rights group B’Tselem urged Israeli soldiers to refuse orders to shoot unarmed protesters.

Last week, Chief Prosecutor of the International Criminal Court Fatou Bensouda warned that “violence against civilians — in a situation such as one prevailing in Gaza” could constitute war crimes. Anyone who orders, encourages or carries out that violence, she said, “is liable to prosecution before the Court.”

Despite Bensouda’s warnings, Sfard said he is cautious about the effect the ICC prosecutor’s notably harsh warning could have on the petition’s success.

“On the one hand, the justices have come to understand they are not the only players in the game, and that the opinion of the international community matters,” Sfard continued. “On the other hand, there is a lot of pressure from the Israeli right on the High Court, including legislation that would allow the Knesset to bypass the court’s decisions.”