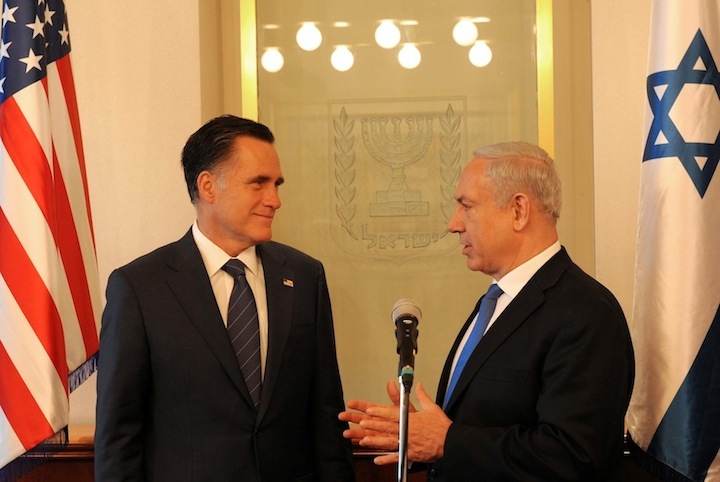 It’s common knowledge that Benjamin Netanyahu would prefer Mitt Romney in the White House. They’re pals, they used to hang out in the States, they’re closely coordinated. In fact, in the exposed “secret video” on Mother Jones, Romney boasts that some of the consultants he hired for his campaign had worked for Netanyahu in the past.

So, it wouldn’t far fetched to say that when it comes to talking points on the Middle East, Romney gets his material straight from the top. From Bibi.

That’s why I was so jealous of Americans yesterday. They finally heard what Bibi thinks, even if it wasn’t exactly him speaking.

In my opinion, this was the money quote, when Romney explained his vision for the future of the Israeli-Palestinian conflict:

You hope for some degree of stability, but you recognize that this is going to remain an unsolved problem. We live with that in China and Taiwan. All right, we have a potentially volatile situation but we sort of live with it, and we kick the ball down the field and hope that ultimately, somehow, something will happen and resolve it.

You Americans are lucky. First, you have Bibi just this Sunday talking to all the American morning news shows. I mean, when did the Israeli media ever get a chance to ask their prime minister the tough questions? You guys know more about him than we do!

And now, you have this Romney video.

See, what everybody wants to know – especially us leftwingers – is this: What’s your solution? Where are you taking us? Two states? One state? 3.5 states? Just tell us already! But no, Bibi doesn’t say a word. Not a thing. In 2009 he “accepted” the two state solution, but nothing happened. We always wanted to know what the plan was, but never had a clue!

We always knew he was a staller. Even better than his mentor Yitzhak Shamir. But now we hear the words:

“It’s like China and Taiwan. We just have to kick the ball down the field and hope for the best.” This is Bibi’s plan. Not Romney’s. Romney is just rehashing stuff he heard from his buddy.

If anyone ever needed any proof that Prime Minister Netanyahu has no intention to do anything about this conflict, that the status quo is good for him and Israelis, that Palestinians will be occupied for decades to come, you got it today.

I just hope Israelis and Palestinians are listening.