Over the years, Israeli politicians have used various disparaging remarks to describe Palestinians. During this U.S. election, it looks like American politicians have adopted the same tactic, as recently shown during Mitt Romney’s visit to Israel. 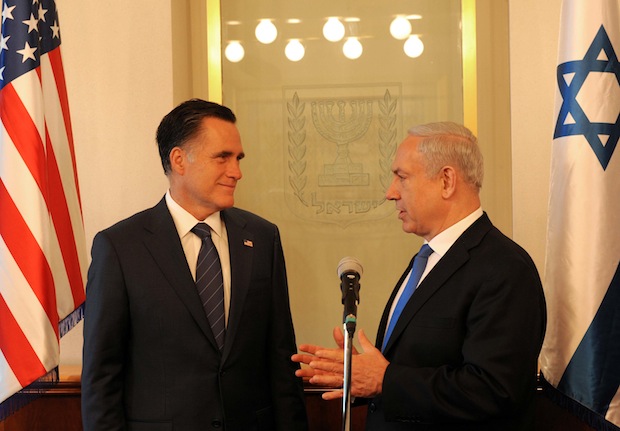 Look, as a Palestinian, I’m used to hearing racist epithets thrown my way.  I’ve heard Abba Eban say that Palestinians “never miss an opportunity to miss an opportunity.”  I’ve heard Menachem Begin call us “beasts.”  Ehud Barak called us “crocodiles.”  Ariel Sharon once said he would “kill as many Arabs as necessary.”  Benjamin Netanyahu labels us a “demographic threat.”  Famously, Golda Meir once even told the world “There is no such thing as a Palestinian people… It’s not as if we came and threw them out… They didn’t exist.”

In the past few years, this trend has made its way firmly into American politics. Of course, we’ve had to constantly deal with American politicians speaking of Israeli and American “shared values” and Israel’s special status as the Middle East’s “lone democracy.”  Back when Barack Obama was running for president in 2008, he was accused of having a “Palestinian friend.” Obama confirmed the fact, but urged reporters to not make him a victim of “guilt by association.”

I started to think that we Palestinians were somehow scary. I was worried we would end up in haunted houses right next to the ghosts and zombies. Wait, forget I said that. I don’t want to give anyone any ideas!

In this 2012 presidential race, we are at the forefront again. Last December, Newt Gingrich called us “invented.” I didn’t know exactly how to take that one. There have been many good inventions, like penicillin and seatbelts. But I got the feeling that Gingrich meant we were a bad invention, like the Macarena and Farmville.

At that time, Newt was pleasing his financier, Jewish-American casino magnate Sheldon Adelson, who had donated millions to his fledgling campaign.  Well, now Newt is gone (kinda), and Mitt Romney is taking his turn to cozy up to Adelson, in hopes of padding his own campaign coffers.

A few days ago, with Adelson in the audience at a $50,000-a-plate breakfast in Jerusalem, Romney hit all the talking points, bashing Iran and speaking of an “undivided Jerusalem.” But like many candidates vying for the backing of Israel’s supporters, he didn’t stop there. He went on to say the large discrepancy between GDPs in Israel and the territories managed by the Palestinian Authority was due to cultural differences and the “hand of providence.” I don’t want to put words in Romney’s idiotic mouth, but it sounds like he was saying Palestinian are bad businessman (because they’re Palestinian) and that God is on Israel’s side.

I don’t know whose side God is on (if he’s taking sides at all), but I can say with some authority that Palestinians are pretty good at business. Aside from building many successful ventures in the West Bank, despite a strangling Israeli occupation that stifles growth and creates a complete dependence on Israeli goods, Palestinians are pretty good when it comes to business dealings of all kinds. I’ve seen my dad buy a car, and trust me, I’m pretty sure the salesman called his mom after the deal was done.

Romney went on to defend his remarks, saying that the main cultural feature that allows an economy to prosper is freedom. He’s probably right about that. And undoubtedly, there’s little to no freedom in the West Bank and Gaza. I wonder if he knows why that is so. It’s almost like he doesn’t watch the news or read any books. We already had one president like that, and it didn’t work out too well. America doesn’t need another illiterate president.

Mr. Romney, you’re right. Freedom is the key. You are free to unequivocally support Israel. You are free to say you would move the US embassy to Jerusalem. You’re free to applaud Israel’s “democracy.” You’re even free to sell yourself to the highest bidder.

But you’re not allowed to be dumb.

Amer Zahr is a Palestinian-American comedian and writer.  He can be reached at amer@amerzahr.com