Is the presumptive Republican presidential candidate really as “pro-Israel” as he’d like us to believe? Or is it simply that he doesn’t have a clue, so he defers to being “pro-Netanyahu?” 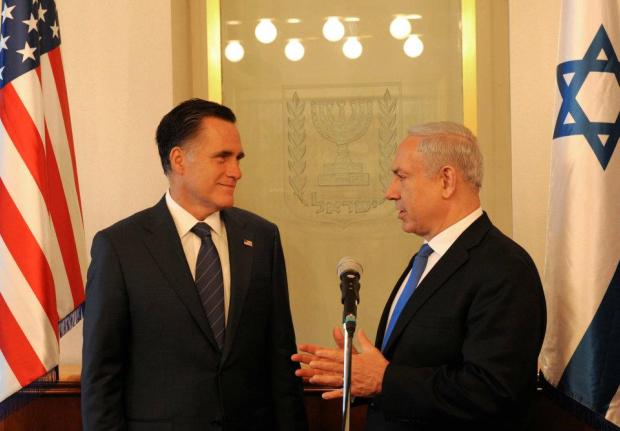 1. Before arriving in Israel, Romney’s foreign policy on Israel amounted to a non-approach: His statements thus far has been that he would  first consult Prime Minister Netanyahu on all decisions regarding Israel and that he would be the “opposite of Obama.” This is a non-approach that defers to an inhuman and unsustainable status quo which is not only detrimental to Palestinians but to Israelis as well.

While Romney was busy trying to get over his diplomatic blunder in London on Friday, President Obama was once again proving he is the most “pro-Israel” president that he could possibly be. Surrounded by AIPAC officials in the Oval Office, Obama signed a bill that guarantees $70 million to Israel’s Iron Dome project, thereby reinforcing U.S. security and military cooperation with Israel. So what does being the opposite of Obama mean then? Romney can only be said to be “pro-Israel” inasmuch as “pro-Israel” means being “pro-Netanyahu and “pro-occupation.”

2. Romney’s visit to Jerusalem has only served to underscore his non-approach. He even went one step further when he broke the convention in U.S. politics of not criticizing the current president on foreign soil and attacked Obama – first in an interview to his sugar daddy’s newspaper Israel Hayom and then in his speech, when he stated, as reported in Haaretz, that “Diplomatic distance that is public and critical emboldens Israel’s adversaries.” So now we know Romney doesn’t keep his promises and has no integrity.

3. Romney asserted that he will back Israel’s right to strike Iran unconditionally: “I respect the right of Israel to defend itself and we stand with Israel.” This is standard fare but I mean, let’s be clear: this is a non-approach, as we have no idea what Romney is actually prepared to do or how he presumes to handle a situation in which the region is in all-out war. Clearly for Romney, “pro-Israel” means “pro-attack on Iran” and “ignoring the Palestinians.”

4. Also, would it hurt to throw in some more standard fare about how a resolution to the Israeli-Palestinian conflict is a vital part of bringing stability to the Middle East? Or is that considered too “anti-Israel?” How can a U.S. Presidential hopeful come to the region, not mention the Palestinians at all and not say something about the importance of a two-state solution? Even just for the sake of consistency as far as American foreign policy rhetoric for the last 40 years – not to mention the international community’s position?

5. As Juan Cole points out in his list of “Top Ten most Distasteful Things About Romney Trip to Israel:”

It is distasteful for an American political candidate to hold a high profile fundraiser abroad, implying a commitment to a foreign country as a means of reaching out to American interest groups.

Indeed, Monday morning’s fundraiser was expected to include extremely wealthy Jewish Americans who were reportedly flying in especially for it. In other words, Romney is using Jerusalem, one of the most controversial, tense, volatile and problematic places in the Middle East – and the epicenter of the Israeli-Palestinian conflict –  to host a fundraiser for extreme right-wing, one-staters like Sheldon Adelson and Evangelical Zionists that clearly do not have the interests of the actual residents of the city – both Israelis and Palestinians – at heart. It also has little to do with the majority of American Jews, who vote Democrat and, according to a recent Gallup poll, plan to continue to do so overwhelmingly in November.

Moreover, Romney’s aides announced the fundraiser will be closed to the press, which violates the agreements he reached with the press in April regarding coverage of all future fundraisers he holds in public spaces. So Romney once again broke a promise.

And as Juan Cole eloquently asserted, the location of the fundraiser makes it all the worse:

It is distasteful that he is holding the fundraiser in the King David Hotel, which was famously blown up by the Zionist terrorist organization Irgun in 1946, in a strike that killed 91 persons and wounded dozens, many of them innocent civilians.

>> Romney or Obama: Why the Left in Israel should care

>> Jewish Democrats use rightist tactics to attack Romney on Israel