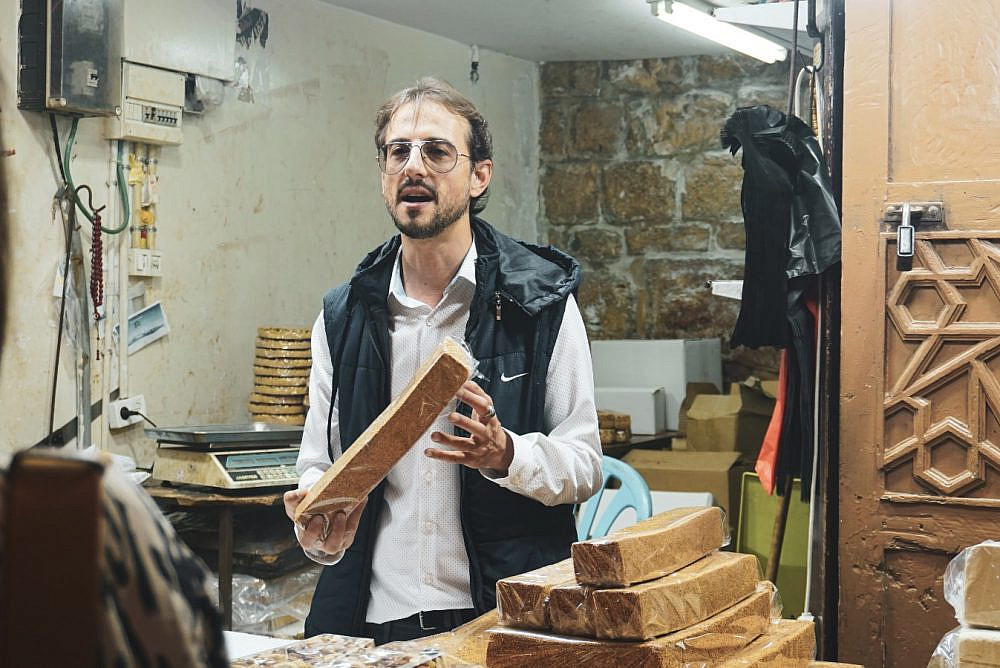 Izzeldin Bukhari knows the cobbled streets of Jerusalem’s Old City like the back of his hand. The arteries of the ancient city are intertwined with his own; the energy in the air is his oxygen. His family has been here for over 400 years, having emigrated to Jerusalem in 1616 from Bukhara, Uzbekistan to establish a Sufi center known as the Uzbek Zawiya. Bukhari comes from a long line of sheikhs; his father, grandfather, and great-grandfather dedicated their lives to guiding others along the path of Sufism, no matter the obstacles in their way.

It’s late morning at the end of October, and there are 12 of us on Bukhari’s Sacred Cuisine tour. He runs the tour two to three times a week, starting at Damascus Gate. Bukhari seems to know about 50 percent of today’s group already and the other 50 percent he greets in whatever their native language is. A forgiving breeze softens the sound of the morning, while vendors selling ka’ak, large ring-shaped bread covered in sesame seeds, and knafeh, a sweet cheese pastry, call out to tourists like old friends.

Bukhari can’t go two steps in the Old City without high-fiving, fist-bumping, or shouting a greeting to somebody. You’d think this would hold up the tour, but it actually just adds the ingredient most Old City tours are missing: authenticity. He introduces us to an old family friend who makes za’atar-spiced bread. As we munch on it, Bukhari explains how the herb is synonymous with the soil of Palestine and symbolizes redemption and connection to the land.

Afterwards we wind through the streets into Abu Ahmad Falafel and Hummus where we chow down on four different types of hummus. Here Bukhari shares the story of falafel, and how the Copts in Egypt invented the dish as a substitute for meat during Lent. The next stop is Bassem’s Gallery & Cafe, a coffee shop deep in the heart of the Muslim Quarter, run by Issam from Jerusalem’s Afro-Palestinian community. “It’s the Old City,” Bukhari says as we squash into the back of the shop to sip fragrant coffee and eat walnut fingers. “Things can get intimate.” As we eat, Issam shares how his ancestors made the journey to Jerusalem from Senegal. 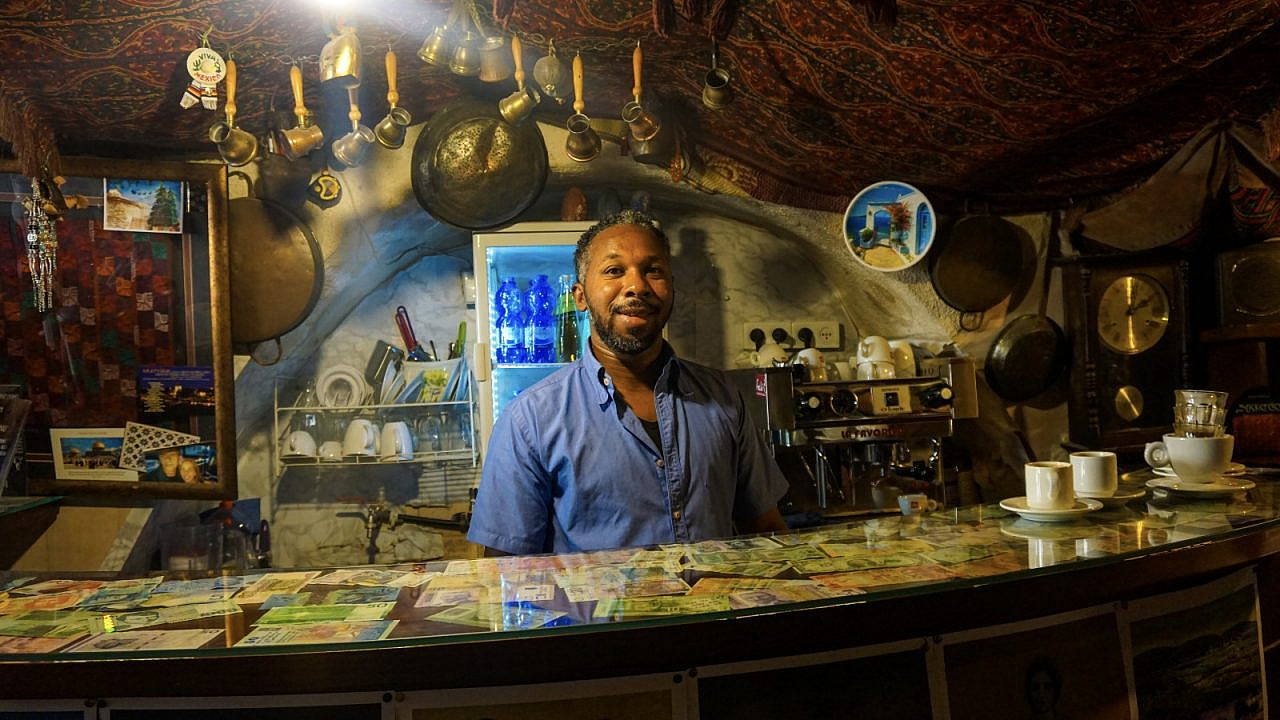 We try el habib wa dervish (which looks and tastes like a combination of pizza and quiche), then visit a traditional tahini maker, before entering a hidden sweet shop where a young man of about 15 slices loaves of baked sesame and coconut with a machete. “I encourage you to buy sweets from this family,” Bukhari says. “I’ve known them my whole life, and their sweets are the very best.”

Every step of the way, Bukhari describes the roots of each dish in encyclopedic detail. Keeping the history of Palestinian cuisine alive isn’t just a form of resistance; it’s his life’s mission.

‘A way of bringing peace to one another’

In Sufism, feeding someone is the highest form of worship. And when Bukhari’s late grandfather led meditation groups in the Uzbek Zawiya every Thursday evening, they always ended with a feast. “It’s a way of bringing peace to one another,” Bukhari says. “When you’re sitting at a table, you’re eye-to-eye. When you share food, you know you can trust one another. When you invite someone to eat, you’re showing them they are welcome.”

When the Bukhari family established the Uzbek Zawiya in the 17th century, it became an unofficial embassy for the Holy Land. Hundreds of Sufis, pilgrims, and explorers would pass through the family’s courtyard every year, meditating, eating, resting and building community.

Sufism is an introspective and gentle sect of Islam, with a focus on inner growth and spirituality. It is open-minded, non-judgmental, and forgiving. So when war, invasion, or occupation comes to the door, the community experiences immense pressure. Their fundamental belief in peace and nonviolence can lead fellow followers of Islam to consider them complicit, or even traitors. This has impacted the Sufi population around the world, from Egypt to Tunisia to Senegal, and the events of 1948 in Palestine were no exception. 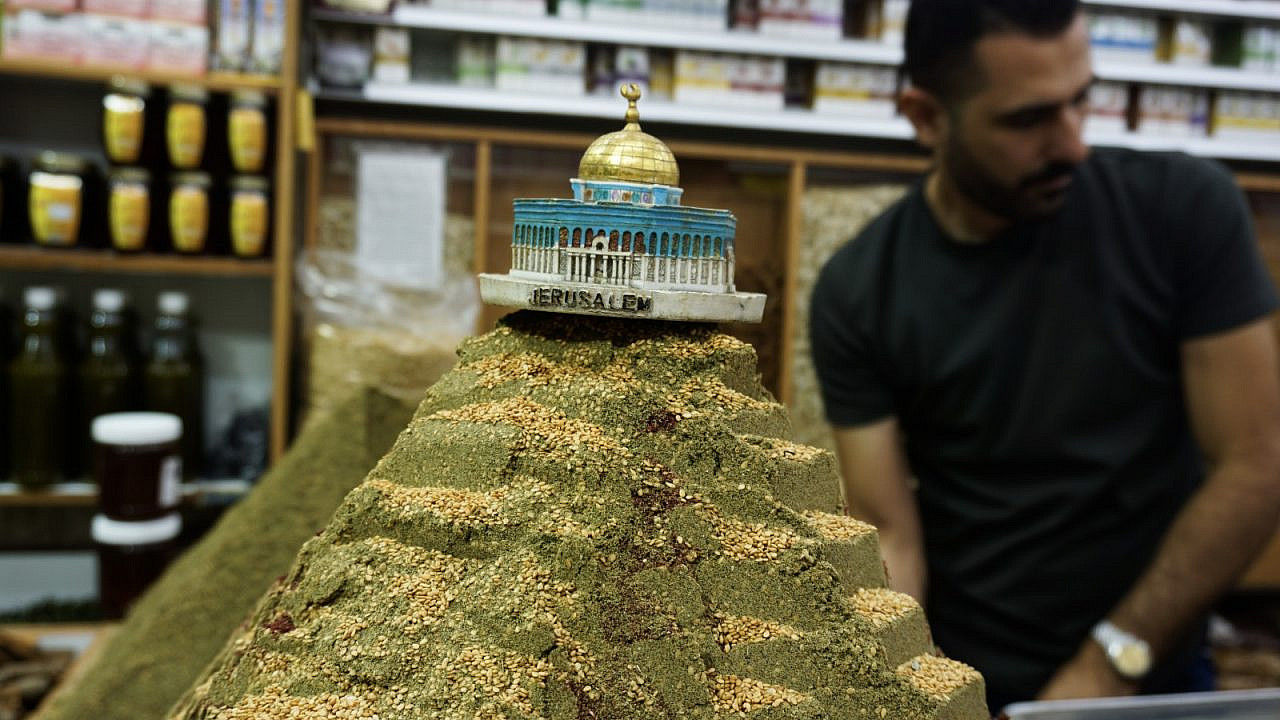 A mound of za’atar in the Old City of Jerusalem. (Alice Austin)

Since the Nakba, Jerusalem’s Sufi population has dwindled down to a couple of hundred, with many shedding their Sufism in exchange for more traditional Islamic sects. But the Bukharis’ Uzbek Zawiya remains in the Old City today. “To me, Sufism is my own connection with the creator and the universe,” Bukhari says. “I don’t need anyone else to verify it. It’s something sacred between me and the creator.”

Growing up, Bukhari had a feeling his world was enchanted, but it took a move to the United States for him to understand the full magic of his identity. When he moved to Arizona in 2009, he was appalled by the lack of falafel and hummus. So he decided to start making it himself, asking his father for intergenerational recipes and his mother to send packages of herbs and spices from the Old City. When he received that first package in the post and inhaled the fragrant smell of Jerusalem, it felt like an epiphany.

In America, Bukhari made vegetarian and vegan food, also known as Somi, which is Arabic for fasting and a colloquial word for vegetarian. Making Somi food with ingredients harvested on Palestinian land felt even more poignant when surrounded by McDonald’s, In-N-Out, and Taco Bell. Bukhari points out that Palestinian cuisine is traditionally vegetarian: fattoush, tabouleh, falafel, lentils, hummus, akoub (Gundelia), khobbeizeh (mallow), mlokhiyah (a stew made of jute mallow). “Meat used to be a luxury, it was something you ate on occasion,” Bukhari says. “I wanted to take Palestinian cuisine back to its Somi roots.”

So when Bukhari moved home to Jerusalem in 2017 he set up Sacred Cuisine. With this concept, Bukhari can fulfill many of his aims. With his food tours he can pass on stories, share traditional dishes, and introduce tourists to local vendors. With his cooking classes he can share the methods used by his elders, and champion the value of eating Somi food. When he caters local events he can introduce diplomats, activists, and CEOs of NGOs to the flavors of Palestine.

At first the families and vendors were confused by his tours. “They didn’t understand what I was doing, or why I was doing it,” Bukhari says. But now they’re ready and waiting when the tourists come. They’ve seen Bukhari on TV with Jamie Oliver, they’ve seen him written about in The New York Times, and heard about him traveling across the world to cook alongside world famous chefs, so they know something important is happening here. Their world is being celebrated. 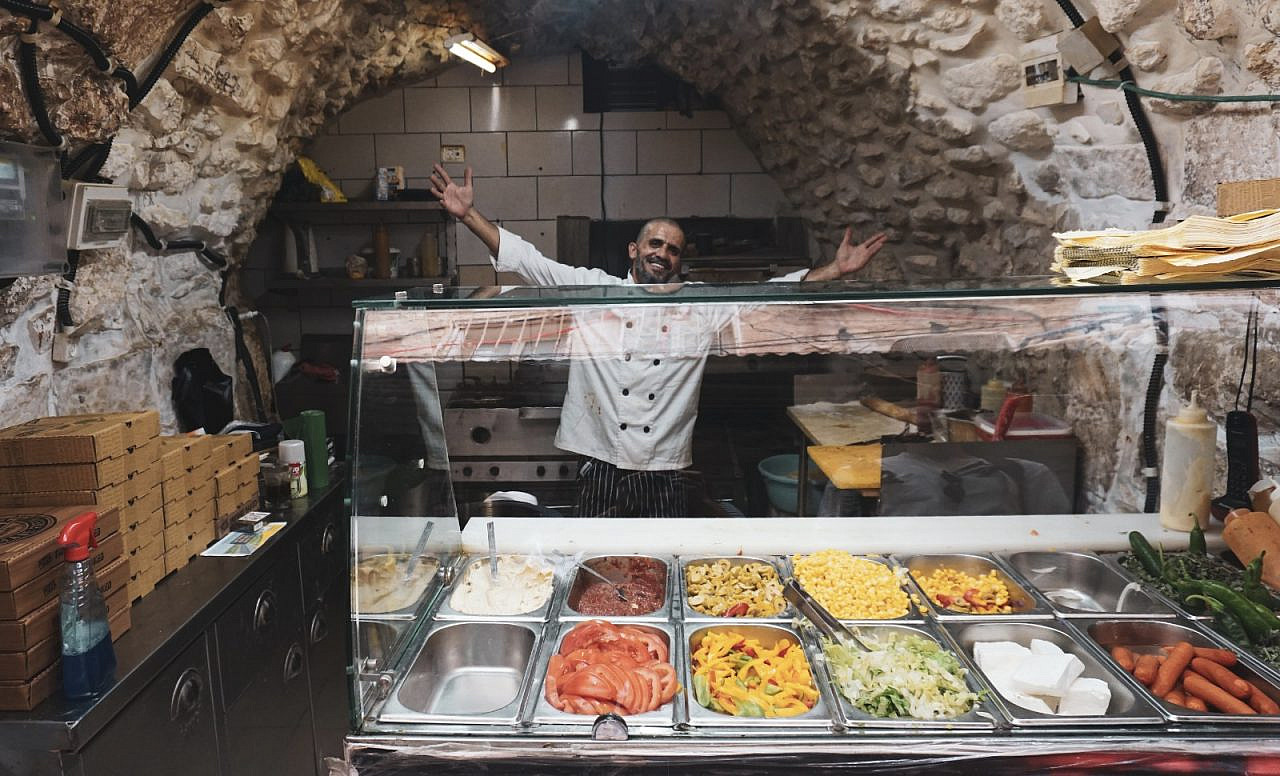 In Mondoweiss’s 2020 film “Colonising the Tastebuds,” Bukhari says food is one of the ways he can hold on to a Palestinian identity that is under attack: “Just talking about food can really reflect the depth of Palestinian society and the history of the Palestinian in this land,” he says. “They [Israel] are trying to teach us to give up on being Palestinian. And we are saying ‘I can’t.’ Simply, we can’t. It’s in our blood, it’s in our ancestors, it’s the history, the heritage. It comes with every musakhan dish I eat, with every hiwerina I eat, with every warak dawali. And this is how we continue to be Palestinian.”

Agriculture has always been integral to the Palestinian economy and culture. Before the advent of agricultural machinery, Palestinian families would spend entire days together outside harvesting, picking, peeling, washing, and scrubbing. Bukhari says it was a form of meditation, even if they didn’t know it, and a way to spend time together in nature, unhurried, grounded, and unified. Once it was time to eat, the food tasted better because they’d accompanied it every step of the way. Today, with more and more Palestinian land in Jerusalem and the occupied West Bank being seized by the Israeli state to make way for settlements and firing zones, simply harvesting crops becomes a form of resistance.

The food tour ends in a spice shop called Manba el-Za’atar, which has been owned by the same family for generations. It’s like walking into the spice edition of Willy Wonka’s chocolate factory: turmeric, nutmeg, cinnamon, za’atar, and adonis are piled up in pyramids next to mountains of maftoul (Palestinian couscous), freekeh (a type of grain), and durum wheat. Bukhari stands behind the counter, explaining how the taste of each spice differs based on the soil; how za’atar grown in the South Hebron Hills tastes slightly different to za’atar grown in the mountains of Jenin.

For the family that runs it, this shop isn’t just their livelihood; it’s their sanctuary, too. When the Old City’s Moroccan Quarter was destroyed after the 1967 war to make way for the plaza in front of the Western Wall, the family fled their home to hide here, living off grains and spices until the danger had passed. “So every spice, every grain you see here represents something different in Palestinian culture,” Bukhari says, digging a spoon into a mountain of nutmeg. “These flavors hold our history and our experiences.”

Correction: A previous version of this article claimed the Moroccan Quarter of the Old City was almost destroyed in 1967. It has been amended to reflect the fact that the neighborhood was completely destroyed after the war.

Alice Austin is a freelance journalist covering culture, subculture, and the intersection of politics and music.