When a pleasant tour of the Sea of Galilee turns into a display of potentially deadly racism, life becomes even more complicated for an Israeli representative. 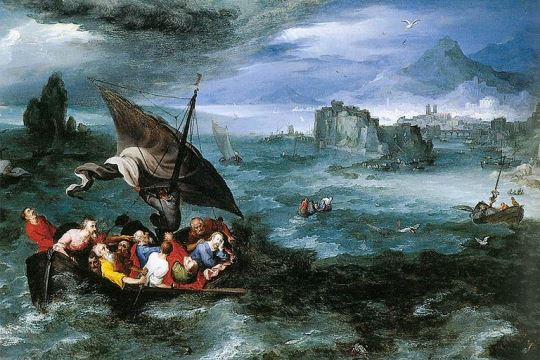 It was a gorgeous day to be on the water, and the water itself was gorgeous. The Sea of Galilee, stroked by springtime winds, overlooked by mountains with names as beautiful as the slopes themselves: Arbel, Golan, Jabel Ash-Sheikh, Mt. Canaan.

Our group was made up mostly of American tourists. There were two Israelis, myself being one, and one Palestinian. This tour of the Holy Land is given by Mejdi, which offers dual narrative tours of the entire country. I accompany the group in the role of the Israeli, which means I must let go of much of my critical bias and reflect diverse viewpoints, including that of both the Israeli mainstream and of the Right. It’s an acquired skill, but it’s doable (especially in this kind weather), in a landscape I identify with peaceful kibbutzim and delicate Hebrew poetry. With so many things that are beautiful about the Israeli identity.

So we stepped off the dock of Kibbutz Ginosar and on board the King David, a boat that carries tourists and pilgrims on pleasure trips over the fabled Sea of Galilee. We have had a fine morning, wandering through the ancient remains at Tel-Dan and Banias, exploring Capernaum and enjoying St. Peter’s fish at a waterfront restaurant. We spoke of Syria and Lebanon, of the wars of recent decades, of the bomb shelters in Qiryat Shmona, of Tel-Chai and the tale of early Zionism in the region. Now was time to catch the breeze and enjoy a place of great beauty and spirit.

The wind’s caress turned rougher. The lake was choppier than I have ever seen it. The King David, designed to resemble the boats of first century fishermen, was big and steady, but other vessels suffered. Soon we saw two heads bobbing over the water, about half a cable to starboard. Closer to us, the lake’s ripples cradled a vacant jet ski. Clearly the two, who appeared to be wearing life vests, fell off their jet ski, were swept away, and needed our help, but we didn’t halt. Not at first.

“Stoooooop!!!” yelled a crew member at the stern. The captain, at the tiller, remains motionless. The crew member (one of three), yelled again, and again, and the others joined in, until finally the boat’s motor was killed. We all prepared to approach the men and rescue them, but the captain reversed only a few yards and stopped. When I stepped over to inquire, he pointed to nearby windsurfers who swept by us and said. “They’ll pick them up.”

“We may hit them if we come too close.”

“Okay, so let’s not get too close and throw them a rescue wheel. Have we any on board?”

“No,” replied the captain.

“Really? Well, they are far from the shore and far from the jet ski. We are a million times more equipped to carry them to safety than the windsurfers, and the wind is blowing Westward, so we don’t risk being taken too far in their direction. Maybe we could…”

“Don’t tell me about winds and directions,” the captain started the motor again, “I’ve been on the water for many years and I know what I’m doing. Here, look, the windsurfers are picking them up.”

I explained to the group what the captain had said. All the while I could hear behind be the crew members conversing bitterly with the captain. “People die this way,” one of them said.

It took no longer than five minutes for the captain to feel assured enough to boast about abandoning the castaways. “I know those Arabs,” he told me. “They come to Tiberias, have beers, rent jet skis and there they go.”

Stepping over to one of the crew members, I asked him whether the ship carried rescue wheels. He said it does. He did not look me in the eyes. He clearly felt very uncomfortable.

My own sense of discomfort only developed later, while strolling through Tiberias in the evening. The captain assumed that the men overboard were Palestinian citizens of Israel. That was enough for him to wash his hands of their fate. The crew members were uniformly unhappy about the decision, but could no nothing in the face of hierarchy. What did the men in the water see, as they waved to us for help? They saw us moving away, all of us.

This was a lot to stomach. Was I in fact party to their abandonment? Were the tourists? Were the crew members? Comparisons to the “larger boat” (the State of Israel itself), and its own captain’s decisions, inevitably formed in my mind. Then came the big question: how do I go back to being the group’s Israeli chaperon the following day? Do I keep this story a secret? Do I calmly discuss the ideology that might lead to such behavior? Do I make comparisons with attitudes prevalent in other lands, in different times, towards my own people?

When morning came and we boarded the bus to Nazareth, I ended up divulging the story in full, openly discussing my discomfort. I explained that I do not regard the captain’s decision as congruent with Jewish values (I did not mention a rabbinical decree, issued by Maimonides, stating that a drowning Gentile may not be saved on the Sabbath, the day on which we sailed aboard the King David), but added with a sigh that it is becoming more and more normative in today’s Israel.

A wise member of the group remarked that such behavior is not exclusive to Israel. She said she could picture a Californian boatman giving a similer treatment to people he might perceive to be Latinos. For what it’s worth, I believe her, but what is it worth? Around us, Nazareth’s suburbs came into view: modest Palestinian neighborhoods, mosques and churches. Above them, on a high hilltop, loomed the residential towers of Nazareth Illit: the Zionist addition to Nazareth’s metropolis. Nazareth Illit’s mayor recently launched an outspoken campaign against Palestinian-Israelis who move into the town. He’s a captain indeed, one who was voted in by his city’s passengers. Traveling below Nazareth Illit’s high ground, I felt a bit as though I am drowning, without much of a life vest, and with the weight of the darkest moments in my own people’s history chained to my ankle like a rock.