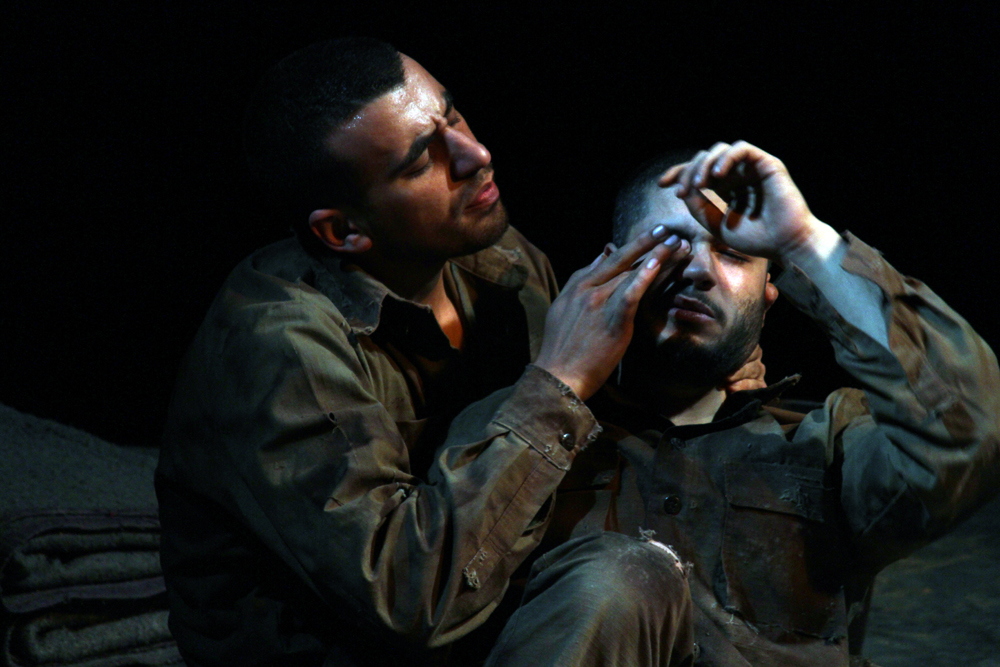 NEW YORK — You would think the words “Israel,” “Palestine” and “occupation” would have to be spoken during a theatrical production tackling the Palestinian political prisoner experience.

Not so in the Jenin Freedom Theatre’s adaption of South African playwright Athol Fugard’s “The Island,” which just concluded a four-state U.S. tour, the first Freedom Theatre production performed in English to tour abroad.

Most Palestinians have had some experience with an Israeli military prison. Since 1967, approximately 40 percent of the male population of the Occupied Territories has been detained by Israel, according to the Council for European Palestinian Relations.

“Each family, each house has an experience with the prison [in Palestine],” said Freedom Theatre actor Faisal Abu Alhayjaa.

According to B’Tselem, 4,828 Palestinian detainees and prisoners were being held in Israeli prisons, as of July 31. Only 68 percent of them were convicted by a court and serving sentences.

The conviction rate of Palestinians tried in Israeli military courts is nearly 100 percent.

Israel’s Ofer military prison, located in the West Bank and notorious for its harsh conditions, is not too far off from the setting of “The Island,” based on South Africa’s Robben Island, the prison complex where Nelson Mandela was imprisoned.

With its adaptation, the cast and crew said the Freedom Theatre did not have to change the story much.

It opens with two prisoners, John and Winston, working in a quarry, using imagined tools to dig, carry and move imagined earth. They’re forced to run by the unseen guard, Hodoshe, representing the state that has imprisoned them.

Each night, the men rehearse “Antigone” by Sophocles, drawing parallels between Antigone’s plight and theirs. They argue and laugh over who will wear the wig and play the female role.

At the play’s climax, John learns that his sentence has been reduced and he will be released in three months. Winston is serving a life sentence, and while he is immediately excited for his friend, he soon breaks down; knowing they will be separated, he falls to the ground, sobbing. 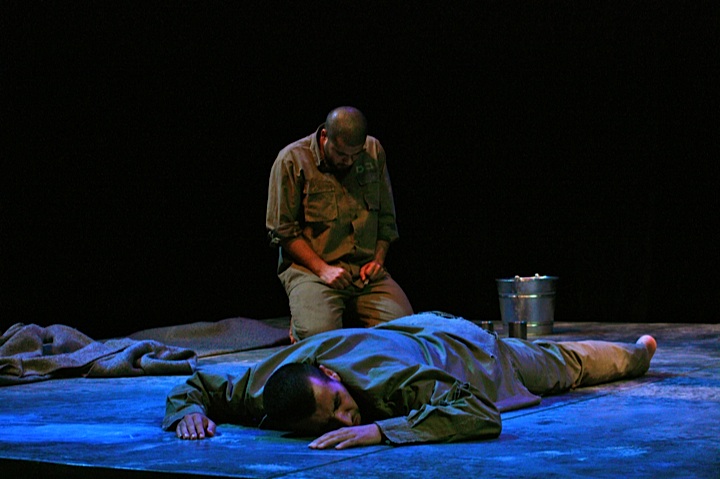 During the talkback, Kushner commended the Jenin actors on their performance. He noted the theatrical tragedies of Antigone and the prisoners in “The Island,” and the real-life tragedy of Juliano Mer Khamis, the founder of the Jenin Freedom Theater, who was murdered in 2011. Kushner called Mer Khamis’ documentary “Arna’s Children,” about his mother and her work at the Jenin Freedom Theatre, the “best film about theater.”

On the situation in Israel and the Occupied Territories, he said his hopes were shaken, but not in despair. When Kushner asked if the cast and crew had considered performing “The Island” for Israeli audiences, director Gary M. English was curt. “It’s easier for them to get to the U.S. than to Haifa,” he said, explaining that the Palestinian actors, both from the Jenin refugee camp are not allowed to enter Israel and had to get travel visas in Amman in order to visit the U.S.

The actors, Ahmed Alrakh (John) and Abu Alhayjaa (Winston), trained at the Freedom Theatre’s acting school in the Jenin refugee camp in the West Bank. They rehearsed in English for one month in Jenin and two weeks in Connecticut before the start of the U.S. tour, English said.

After an Arabic performance in Jenin, Abu Alhayjaa said a friend in the audience who had been in prison for 18 months was in tears backstage, recalling a scene in the third act when the prisoners embrace each other before John is released. His friend said when he was released from prison he hugged his cellmate who was serving 20 years the same way.

The account motivated Abu Alhayjaa to tell the stories of Palestinian prisoners by performing the play, not just for foreigners, but also the Palestinian people, who he said have become normalized to the prisoner experience and need to be reminded of their struggle.

“We are not just actors. We are also freedom fighters,” Abu Alhayjaa added. 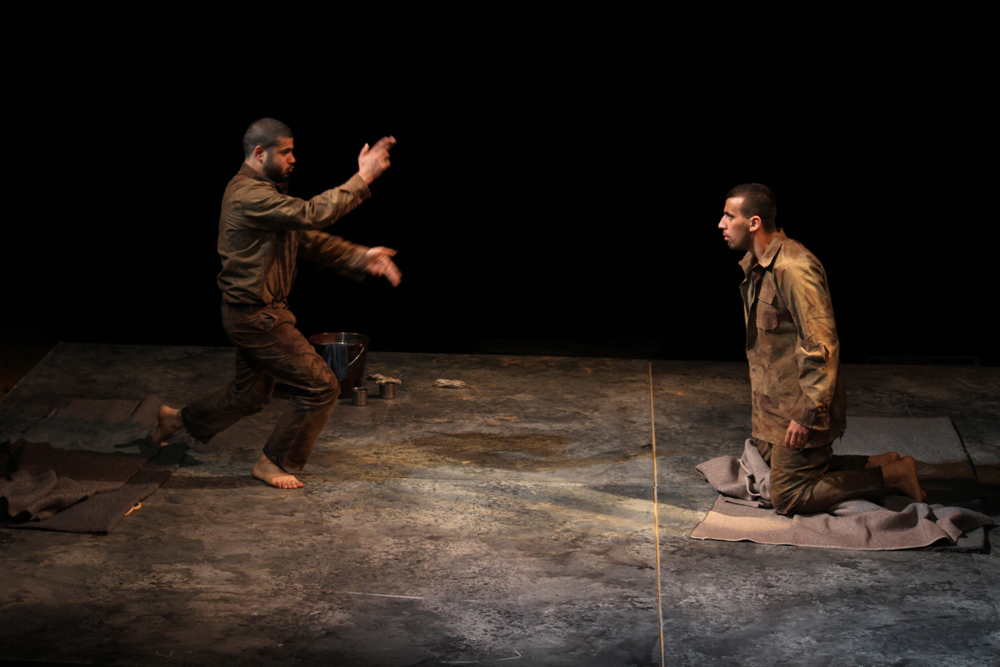 While the Arab-Israeli conflict and the occupation were absent from the play’s dialogue, rhetorical clues lead viewers to the modern political commentary embedded in the South African, apartheid-era text.

During the argument with his cellmate over playing the female role of Antigone, Winston comically alludes to the prison guard’s goal to dehumanize him. “All he wants to do is make me a boy. Not a woman,” he says.

In his anger, Winston tells John that “Antigone” is not even a true story. It’s mythology.

For many Palestinians, the injustice of the Israeli occupation and prison system begins before 1967. It starts at the founding of the State of Israel in 1948. Regardless, the political suppression of Palestinians is a result of historical injustices, which continue to support a system of racial, religious and political segregation in the Occupied Territories.

Again, during his argument over playing Antigone, Winston says, he didn’t burn his passbook in front of a cop and get life in prison in order to dress like a woman.

The audience learns how he came to be imprisoned and are reminded of the green ID books Palestinians carry that bar their entry into Israel.

English, who was the Freedom Theatre’s artistic director from May 2011 to June 2013, said the fact that Palestinian actors are on stage means the play’s political nature does not need to be spelled out.

“When Palestinians speak artistically, the play becomes a mediator for the Palestinian experience,” he said.