Over 1000 men, women and children marched in Qalandiya Sunday to mark the Nakba. The Israeli military stopped the march using heavy handed crowd control measures which resulted in over 100 injured including 20 medium to serious injuries. The demonstration lasted from morning until night with one attempt at upending the eight metre high Qalandiya barrier. 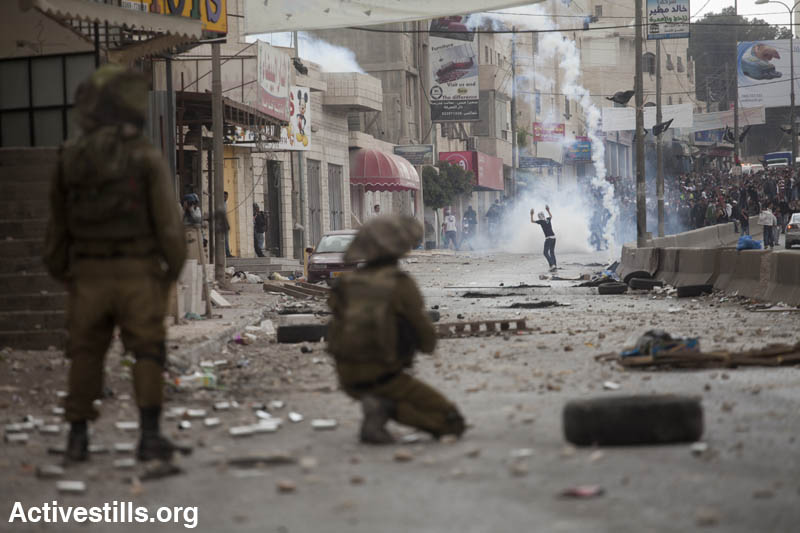 The March 15 youth movement along with various popular committees throughout the West Bank organized a mass demonstration to mark Nakba day at the Qalandiya checkpoint separating Jerusalem and Ramallah. Over 1000 demonstrators including international supporters marched from Ramallah to Jerusalem but were stopped by Israeli soldiers and armed forces. The demonstrators carried keys, the symbol of Palestinian dispossession and wore shirts that said “direct elections of the Palestinian National Council, a vote for every Palestinians everywhere.” The march in Qalandiya took place after a small PA sponsored protest in al Manara square.

As soon as the demonstration got close to the checkpoint, the Israeli army opened tear gas fire from rooftops and from the checkpoint. Scores were injured from tear gas inhalation with some suffering from seizures according to local medical personal on the scene. Despite the attacks, demonstrators regrouped and, for over five hours, attempted to walk peacefully to Jerusalem.

Clashes broke out between stone throwing Palestinian youth and Israeli soldiers after the first hour of protest. Several incursions by Israeli forces resulted in the arrest of four arrests of minors. The arrests were made by soldiers with the assistance of undercover Israeli police dressed as protesters. Protesters also attempted to upend on section of the eight meter high concrete wall that comprises the Qalandiay checkpoint. They were not succuessful.

According to medical staff on the scene, over 100 people were injured from tear gas with scores going into shock or seizure from the highly potent strain of gas that the Israeli army used in the demonstrations. 20 people were transferred to Ramallah hospital with medium to serious wounds including one minor who was shot in the face with a rubber coated bullet. The Israeli army did not report any injuries.

Note: I will be speaking about the Nakba day protests during an online press briefing with the IMEU today at 630 IST and 1130 EST. Please tune in here if you would like to listen.