While Palestinians and their leaders historically took their cues from anti-colonial resistance in Vietnam, Cuba and Algeria, their struggle has, over time, become similar to the fight against apartheid in South Africa. With the failure of the Oslo Accords, new, often overlapping approaches have proliferated, leading Ran Greenstein to find out what a genuine anti-apartheid model would look like in our time. 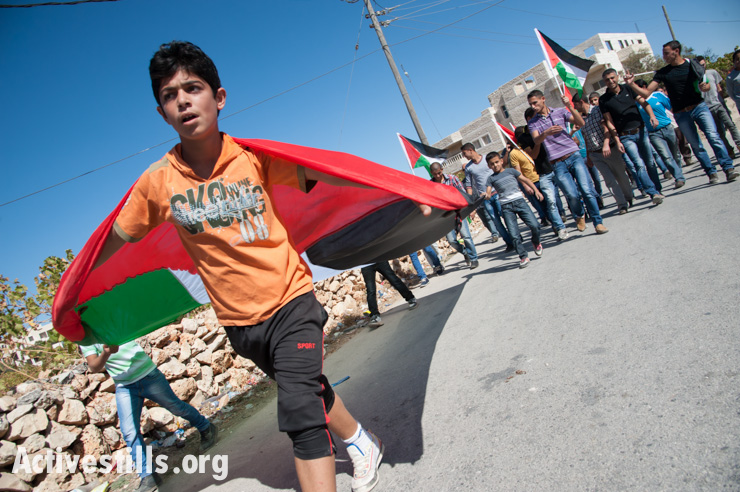 Palestinians, accompanied by international and Israeli solidarity activists, march to commemorate seven years of popular resistance in the West Bank village of Al Ma’sara, October 25, 2013. The weekly demonstration protests the construction of the Israeli separation wall on village land, which would cut off access to agricultural areas. (Photo: Ryan Rodrick Beiler/Activestills.org)

How can we define and understand the essence of the struggle against political oppression in Israel/Palestine? On the face of it the answer is simple: the target is the Israeli regime and its practices. But, is there a common principle in whose name the struggle is being waged?

Various ways of defining the issue have been presented historically: as a struggle of the Palestinian national movement for independence and self-determination, a campaign of a colonized population to get rid of foreign rule, a quest for political equality in the face of an apartheid-like regime, a rights-oriented effort to remove legal obstacles and extend the same entitlements and rights to all residents, and so on.

These definitions are not mutually exclusive and may overlap to an extent. They all regard the Israeli regime (and before it the Zionist settlement project) as the main problem. And yet, each identifies the relevant population and draws the boundaries of political inclusion and exclusion somewhat differently. This results in a tension between different conceptualizations and their political implications. Which segments in the population are part of the problem, and which – at least potentially – part of the solution, is a question that remains open. Each definition is not merely theoretical in nature, but implies a strategy of organization and resistance, and could lead to different kinds of political mobilization.

To understand why that is the case, let’s take a look at the South African anti-apartheid struggle. It was guided, in the main, by the 1955 Freedom Charter and its notion that “South Africa belongs to all who live in it, black and white.” The charter was produced by the Congress of the People, joining four organizations representing respective racial groups. The contradiction between the goal of a unified non-racial country, and a struggle on a racial basis was resolved gradually. The Umkhonto we Sizwe (abbreviated as “MK”) served as the armed wing of the ANC, which formed in 1961 (as part of an initiative between the ANC and the Communist Party) and included black and white commanders and cadres. In 1969 the ANC started accepting members from all groups, and by 1985 all members could assume leadership positions. Despite resistance to such steps on the part of African nationalists (the PAC), Black Consciousness activists, as well as some reluctance among grassroots activists, non-racialism acquired a hegemonic status, playing a major role in the struggle from the 1976 Soweto uprising to the demise of apartheid.

Consequently, the struggle was not defined as racial (pitting a black movement against white people), nor as a national struggle of indigenous people against settlers, but rather as a campaign of all democratic forces against a white supremacist regime. Thus, progressive whites became part of the solution and white people became potential partners in building a new society. Although only a few of them joined the struggle while many stayed on the sidelines, the united white front was shattered. The key role of class discourse – a tribute to the centrality of black workers and their trade unions – helped redefine the campaign as social in nature, open to all those seeking the regime’s demise, regardless of ethnic or racial origins. Dissent from this model was not uncommon, but it never managed to offer a serious challenge to the non-racial paradigm.

Is this ‘ideal type’ model of the anti-apartheid movement valid for the Palestinian struggle?

Historically the answer is clearly “no.” Before and after 1948, the Palestinian political thrust was nationalist and anti-colonial in essence. It was based on the notion of Palestinian-Arab national identity and the definition of Israel as a colonial entity, imposed on Palestinians by imperial powers with the use of force, depriving them of their national rights. Jewish settlers were foreign in origin and – as a group – had no valid claim to the country, which remained Arab in terms of its history, population and the region surrounding it.

Whether settlers had rights as individuals was a matter rarely discussed after 1948. Operating from a position of marginalization, with no consolidated leadership and unified social basis, living in exile and dispersed throughout the region, it was unrealistic to expect Palestinians to be concerned in particular with this question. Their movements, by definition, were restricted to one ethnic-national group, seeking to reclaim its territory from another group. This was a common thread running through the programs of the Arab Nationalists Movement, the PLO, Fatah, the Popular Front, al-Ard and other movements of the 1950s and 1960s. Only towards the end of that period did a debate of a more conceptual nature open up – one that dealt with models of colonialism and strategies to fight it. Two related discussions, regarding the presence of Israeli Jews and models of struggle suitable to the Palestinian case, also emerged.

Interestingly, from today’s perspective, the South African struggle hardly played a role in those days. The preferred models were Algeria, Cuba, and Vietnam, which were seen as successful anti-colonial and anti-imperial liberation struggles. Such analogies, however, were always problematic.

The Cuban campaign was waged from within, mobilizing peasants in support of armed fighters against government forces. The militants came from the outside initially, but their constituency was the majority in the country. In Algeria, the rebel movement was based outside but managed to gain a foothold inside the country and recruit the locals to its campaign. Again, they were the undisputed majority although they had to contend with a substantial minority of settlers backed by overseas French forces. Vietnam was similar to Cuba: the Vietcong was a local group fighting an unpopular government backed by US troops. Working together with forces from across the northern border provided strategic depth and increased the cost to the enemy. Even the anti-apartheid movement, which was directed at that period from across the borders of South Africa, was a re-located local movement, forced temporarily into exile. Once the internal front came alive in the mid-1970s, the focus of struggle shifted back inside the country, away from the exiles and their military campaigns.

The case of Palestine was different. It was not only armed militants and leaders who were in exile but the bulk of their popular constituency. This was not a temporary situation but rather a semi-permanent one, the only case in modern history of people fighting to liberate their country from colonial conquest, forced to operate from beyond its borders. Palestinian strategists usually acknowledged these unique conditions but operated as if these could be overcome with revolutionary rhetoric combined with external support. But reality inexorably asserted itself, and gradually the focus shifted to a conventional anti-colonial struggle against the 1967 occupation, especially after the 1973 October war. This did not mean an automatic change of model; a gap opened between the resilience of the original conceptualization and the practical adaptation of strategy. It was necessitated by the failure of the armed resistance organizations to make inroads into Israeli-controlled territory, and their defeats first in Jordan and then in Lebanon. Their removal to Arab countries away from the Israel/Palestine arena finally doomed the prospects for change directed from outside the country.

During that time, attitudes towards Israeli Jews changed as well. From an initial rejection of those who arrived in the country after 1917, and Ahmad Shuqeiri’s notorious rhetoric, the PLO moved to accept Jews as legitimate, first only if they renounced Zionism and later without ideological preconditions, when the slogan of a ‘secular democratic Palestine’ was raised. This approximated an anti-apartheid model where Israeli Jews were seen as a religious group – not a nationality as they define themselves – within the framework of an Arab Palestine.

By the late mid-1970s the secular democratic state had been relegated to the sidelines, replaced by a focus on gaining independence for a Palestinian state in the West Bank and Gaza. This implied a straightforward, anti-colonial, anti-occupation, model for part of the country. The bulk of the Palestinian national effort for the next three decades aimed to secure that goal. But despite apparent progress with the First Intifada and the Oslo Accords it has led nowhere. New approaches have been floating around since the failure of the Oslo process became evident, frequently conflating different paradigms (one-state solution with bi-nationalism, for example), with or without explicit recognition of national differences, with or without explicit support for the refugees’ right of return, with or without the removal of settlers from the West Bank.

To what extent do these new approaches approximate a genuine anti-apartheid model? What would such a model look like in our current context?

– It would embrace the entire population as a potential constituency, not just those of Palestinian-Arab background (although overcoming the historical dispossession of Palestinians would remain the most crucial political task).

– It would transcend the distinctions between indigenous people and settlers insofar as it implies different entitlements and rights, while at the same time redressing the historical consequences of this distinction).

– It would require a shift from organizing on a ethnic-national basis to mobilizing people on the basis of a social, economic and rights-oriented agenda, regardless of origins. This means recognizing the different structural positions of segments of the population, which may give rise to shifting alliances based on variations in locations, interests, priorities, capacities.

– In other words, it means overcoming boundaries of separation while, at the same time, insisting on the need to fight the legacies of colonial settlement and dispossession in a differentiated manner.

No Palestinian or Israeli movement has adopted such a model quite yet. There is no doubt that Israeli Jews would resist a move in this direction. Radical activists have taken steps towards it, but usually accompanied by a reassertion of the indigenous-settler divide. Thus, the legacy of separate nationalist organizations remains dominant.

The benefits of a full shift to a new paradigm are not obvious. Is it realistic to expect activists to transcend nationalism altogether, given its deeply entrenched position for the last century? This issue requires further reflection.

It may be argued that if we agree on concrete tasks – terminating the occupation, removing obstacles to democracy and political equality, resisting and reversing dispossession – then such conceptual models are of little relevance. This may be true in the short run, but the long-term development of alternative politics requires exploring the implications of different approaches. This means going beyond taken-for-granted categories – Jews and Arabs, Palestinians on this or the other side of the Green line, different Jewish ethnic groups – while recognizing that historical developments have led to the segmentation of the population, with real consequences for organization and consciousness. How exactly this can be done is a matter for ongoing conceptual and political debate.

Related:
If this isn’t apartheid, then what is it?
What can we learn from the Israel apartheid analogy?