One by one, day by day, Europe is closing its gates to refugees desperately searching for a way in. Confused, exhausted and frightened, at times they don’t even know what country they are in. Two Activestills photographers follow refugees as they make their way toward Germany. 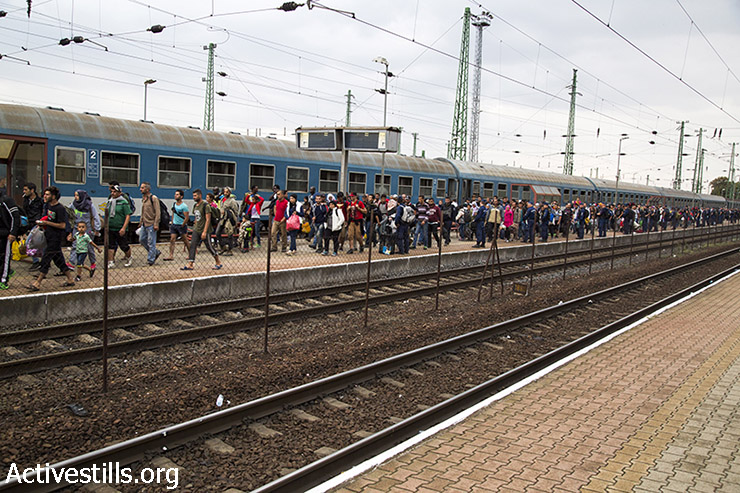 Refugees arrive by train to the Hungarian border town of Hegyeshalom. (Keren Manor/Activestills.org)

The train rolls to a stop at a small town on the Hungarian border town, Hegyeshalom. Some 1,500 refugees, the vast majority of them from Syria and Afghanistan, descend and start marching along the tracks in silence. Outside the train station and alongside the convoy of refugees stand Hungarian police, attempting to organize them into rows of four.

We watch the scene in amazement and try to speak with whomever we can, hoping to see who is unable to march and offer what little we can — a ride for any disabled people, the elderly or women with small children. 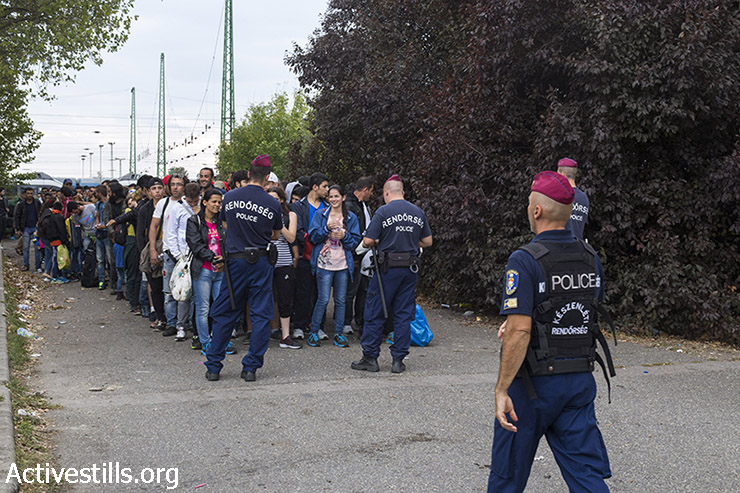 Hungarian police officers organize the refugees who arrived at the train station into rows of four as they prepare to march toward the Austrian border. (Mareike Lauken/Activestills.org)

A family asks us what country they are in. It’s another stop on a long, difficult journey for these thousands of people. Confused, exhausted and frightened, they don’t even know where they are. The police lead them in a march toward the Hungarian-Austrian border, a distance of about four kilometers (two-and-a-half miles) from the train station. Every hour or two another crowded train arrives, packed with hundreds to thousands of people, and then returns to bring more.

We had come to the Hungarian-Austrian border from Berlin, hoping to help people trying to reach Germany. On the way down we heard on the radio that Germany, which has presented itself in recent weeks as the country most warm and welcoming for refugees, had decided to temporarily exit the Schengen zone, which established free movement between EU countries, and reactivated border checks. 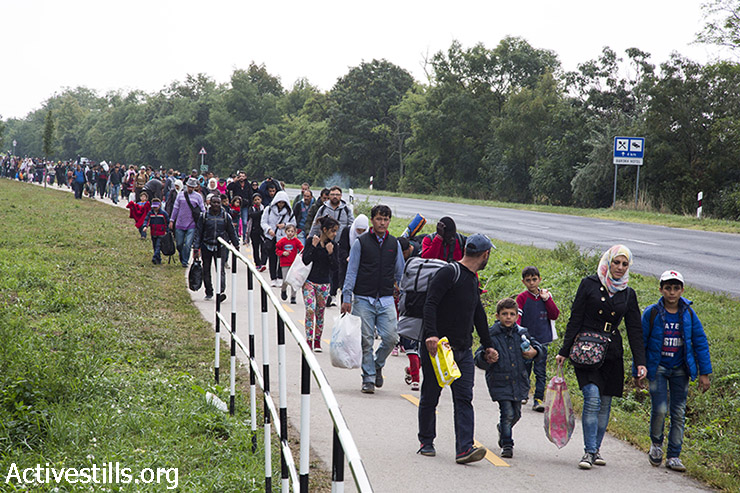 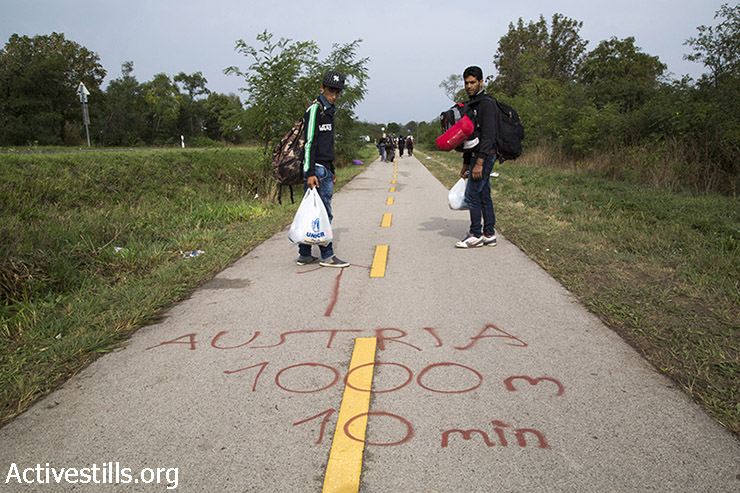 Hungary, into which thousands of refugees are crossing from Serbia, has started emptying the camps it set up along the border. The purpose: to push as many refugees as possible outside of its territory, so that it doesn’t have to register them. Registering the refugees in Hungary would mean that the country has care for them according to the EU’s Dublin Regulation. The rule says that the first country in the EU to which a refugee arrives is responsible for him or her and whatever refugee claims they might have.

The march to the border is reminiscent of hard-to-digest historical images. Many of the marchers leave pieces of their scant belongings along the sides of the tracks. A young boy passes us and says with a smile, “Germany, Germany!” We have to explain that he hasn’t reached Germany, that this is the Austrian border.

The convoy of marchers eventually passes. Then arrive the cleaning crews who silently pick up what the refugees left in their wake. Within a few minutes it is as if nobody was ever here. Eerily quiet.

Just before the border activists and Red Cross volunteers offer the marchers water, food, clothes, and first-aid before they continue to the border camp erected by Austria. Austrian police guide them through improvised lanes crafted from fences and barricades. 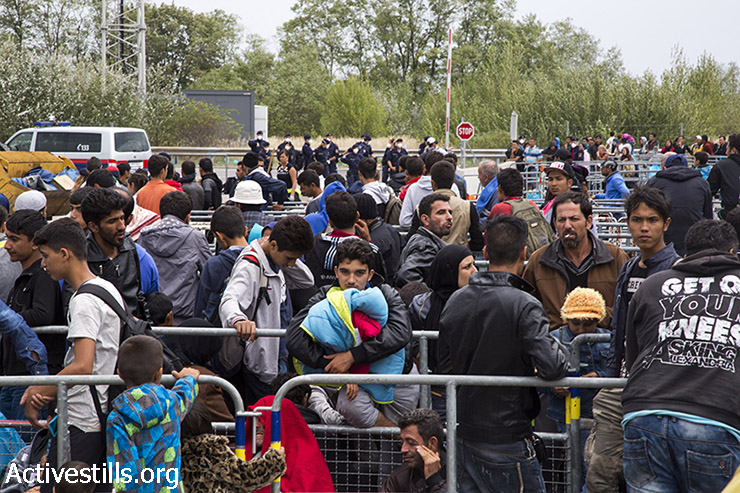 Refugees wait behind barricades and makeshift lanes at the Austrian border. (Keren Manor/Activestills.org) 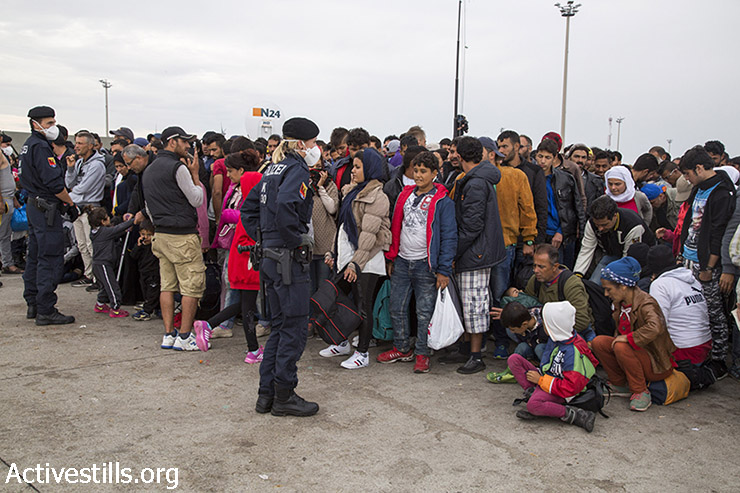 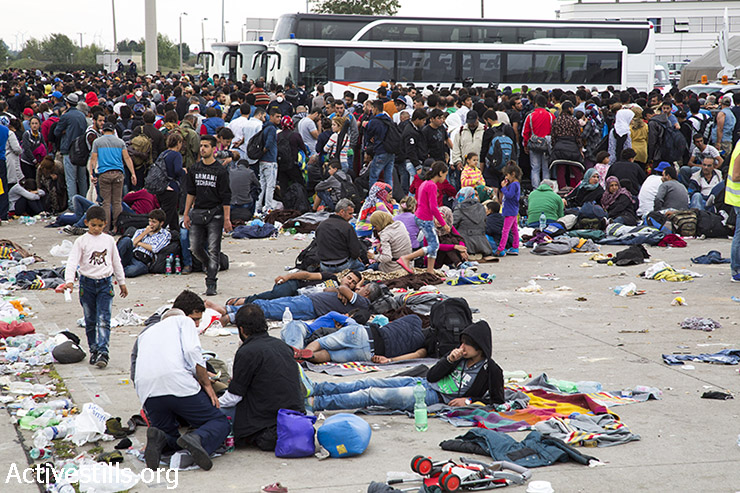 A few buses are parked at the camp but it is clear they are inadequate for the number of people. Everybody wants to get on, even if it means waiting pressed against each other for hours. Some of the people decide not to wait for the buses. Anyway, it’s not clear who they are taking and to where. They start marching in the direction of the border. The Austrian police don’t try to stop them.

The Austrian border is still open, a situation that could change at any moment. They march on the main road, wanting to reach a place where they can catch a train or a bus and continue their journey. Beyond the border dozens of empty buses wait, capable of taking everybody but unauthorized to do so. The Austrian police have closed the main road and the only option is to keep on marching. Again. Niklasdorf, the first Austrian town beyond the border, is about three kilometers away. 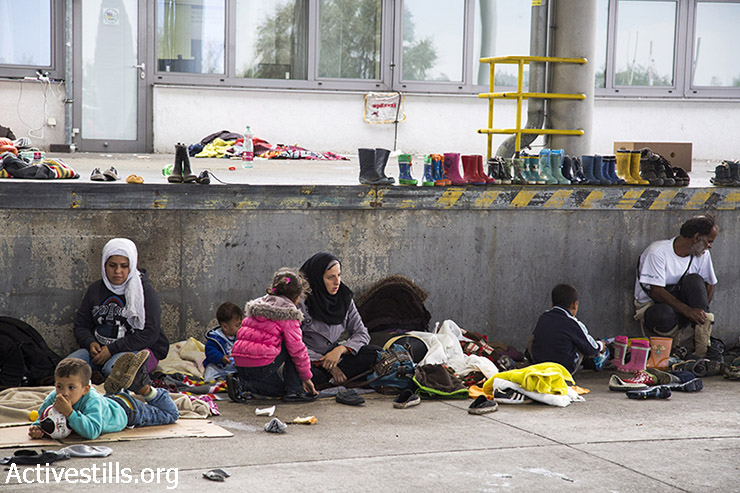 Women and children rest at the transit camp on the Austrian border. In the past the area was a border terminal but has not been used since border restrictions were abolished within the European Union’s Schengen zone. (Keren Manor/Activestills.org) 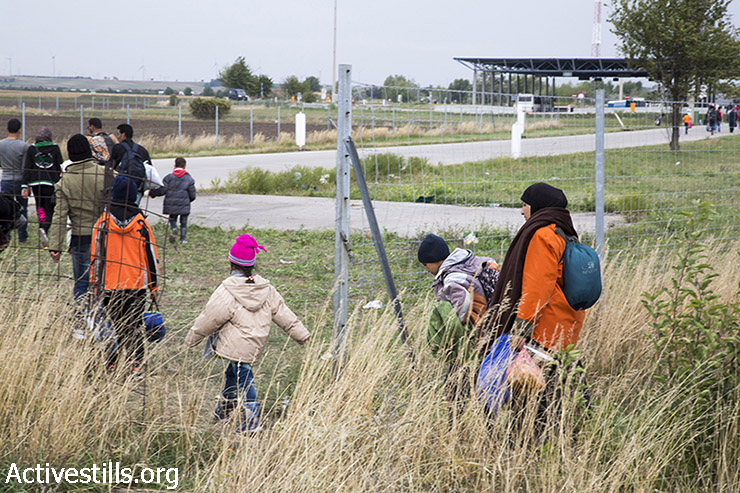 Refugees cross the border through a whole in the fence. (Keren Manor/Activestills.org)

Enter night. Heavy rain starts and the trains arriving now are packed even more densely than earlier. The Austrian government announces that as of tomorrow the border will be closed. Information about the exact hour isn’t clear and keeps changing. The pouring rain, the darkness and the police lights create a sense of panic. Thousands crowd into the camp and wait in the rain for buses to take them to some unknown destination. The army tents erected to provide some shelter are already flooded. Some of the people take out blankets and try to find shelter under the old covered border crossing. 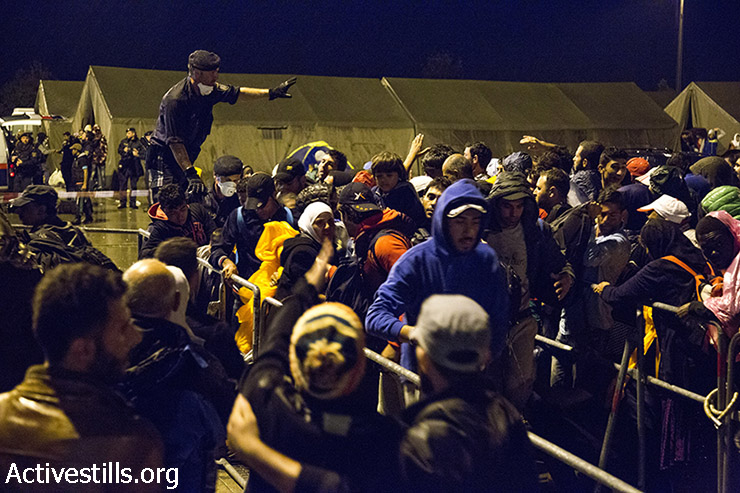 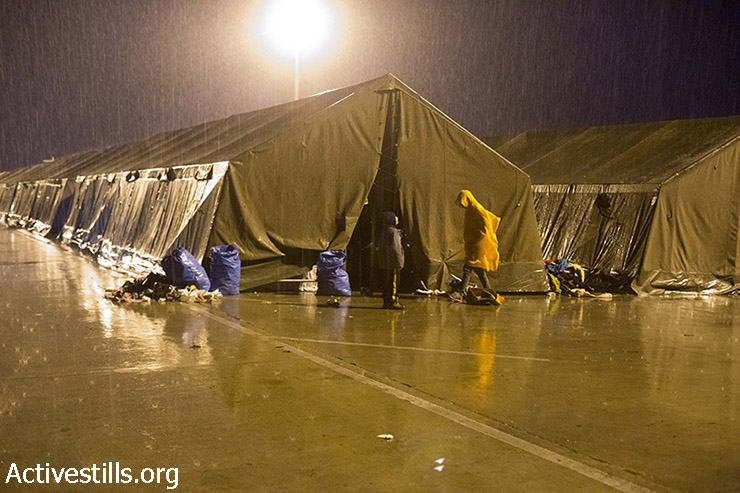 Army tents brought in to provide shelter flooded in the rain. (Keren Manor/Activestills.org) 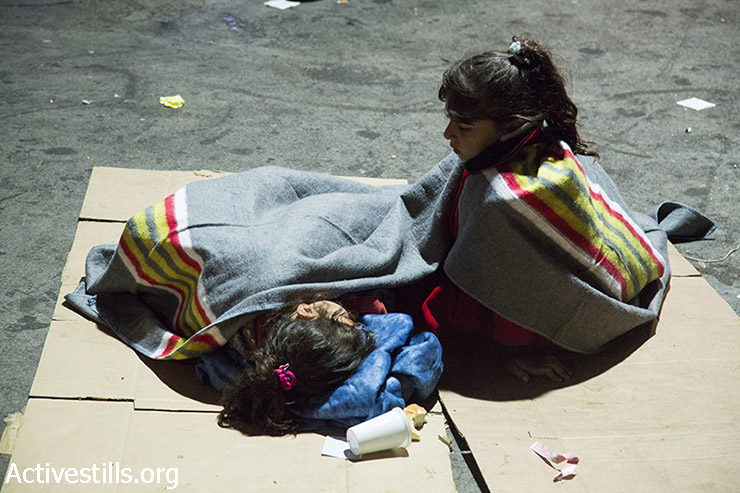 Refugee children get ready to for bed at the transit camp on the Hungarian-Austrian border. (Keren Manor/Activestills.org)

The next morning the Austrian police don’t let any more refugees cross the border on foot — only those who have transportation. Hundreds of taxi drivers have amassed, hoping to exploit the situation and charge between 250 and 400 euros for the hour-long drive to Vienna. We stand next to the taxi drivers as police “release” the refugees according to the number of passengers each driver says he can take. Those who are “released” cross the border directly into the taxis without knowing what the price will be. A few activists stand with us, offering to take refugees back with them to Vienna for free.

We set off in two cars with six hitchhikers, Syrian refugees — a father and his three children and another two who hooked up with them along the way. They met in Turkey, and since they had already been through so much together, they say, they decided to stay together and support one another.

When we arrive at the train station in Vienna it appears that the uncertainty and confusion has followed us from the border. Most of the refugees want to go to Germany or one of the wealthier central European countries. Many of them say they have relatives in Germany. It seems the train service from Vienna to Germany has been stopped. There are rumors of refugees who were removed from trains by German police who would not permit them to continue their journey. 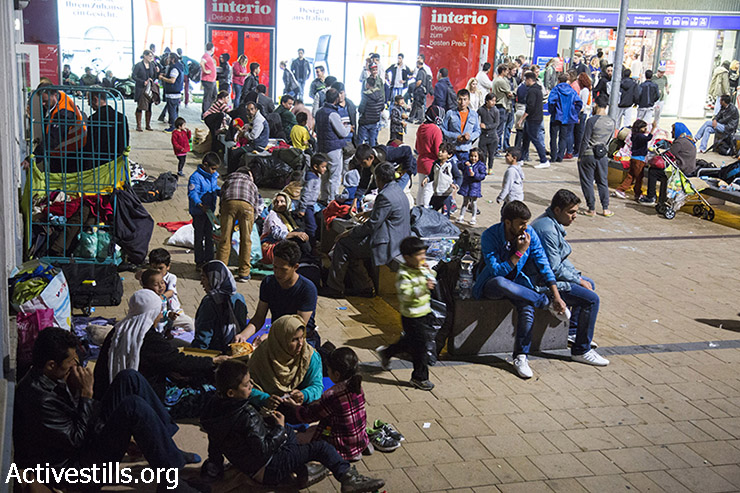 Refugees at the train station in Vienna. (Keren Manor/Activestills.org)

The lack of any coherent sources of information about the border situation contributes to a feeling of insecurity and confusion. Hundreds of people spread blankets on the ground outside and around the train station. Activists and volunteers distribute meals and other items to the new arrivals. It’s not clear at all where they are headed.

We pass a military convoy on our way back to Berlin. The radio reports that all of the border crossings from Austria to Germany are closed, and that Hungary erected a fence and sealed its border with Serbia, leaving some 10,000 refugees stuck at the border. The route is shifting toward Croatia, which declared that it would open its borders. The next day Croatia closed its border, too.