Former minister Benny Begin, who helped draft the Prawer Plan, denies saying Israel’s Bedouin support the plan: How could they if they never even saw it? 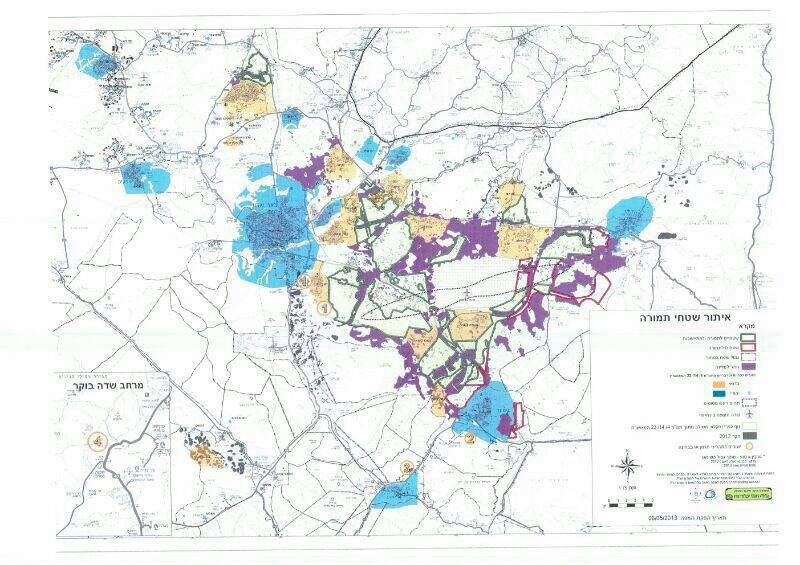 Map of the planned land confiscation and compensation as part of the Begin-Prawer Plan (Image: Courtesy of MK Dov Khenin).
Legend:
Light blue: Jewish town
Orange: Bedouin municipality
Purple: To be expropriated by the state
Green outline: Land to be given to unrecognized villages
Red outline: Land for other uses (pasture, etc.)

Until now, nobody knew the extent of the Prawer-Begin Plan. No government official or statement has detailed how many Bedouin citizens will be displaced, how many unrecognized villages razed and how much land will be expropriated by the state.

MK Dov Khenin (Hadash) on Monday published a copy of a map distributed to members of the Knesset Interior Affairs Committee. The map was prepared by the Prime Minister’s Office for Housing Minister Uri Ariel of the Jewish Home party in an attempt to assuage his party’s fears that too much land would be given to the Bedouin.

It was not clear whether the map was merely an explanatory document meant to swing votes in the Knesset or an actual working document for the eventual implementation of Prawer. MK Merav Michaeli wrote on Twitter Monday afternoon, “[I]t seems the doc the gov presented isn’t the original doc, the gov is still hiding the original and why the changes.”

Another central figure in the formulation of the Prawer-Begin Plan, half of its namesake, former minister Benny Begin, sent a surprising letter to the Knesset Interior Affairs Committee on Monday.

Coalition leader Yariv Levin (Likud) has insinuated and declared that Begin told him the Bedouin community supports the Prawer Plan, or at least that it is a compromise they would accept.

Begin on Monday refuted that he ever made such statements, writing, “I have never said to anyone that the Bedouin accept my plan.”

He couldn’t have made such a claim, he explained, because he never even presented the Bedouin community with his plan, “and therefore I could not have heard their reactions to it.”

In addition to Levin’s now-contested Begin quote, Israeli government spokespeople have responded to anti-Prawer protests in recent weeks by making an unsubstantiated claim that 80 percent of the Bedouin population supports the Prawer-Begin Plan.

“How can you claim that 80 percent of the Bedouin population accepts the Prawer Plan when the most basic information about he plan is hidden even from members of Knesset who are voting on it, and certainly hiding from the Bedouin in the Negev,” anti-Prawer activist Huda Abu-Obaid said on Monday.

Read more about the state’s treatment of anti-Prawer activists

“Now it won’t be possible to hide behind vague statements about a plan ‘for the benefit of the Bedouin’,” added another activist, Fadi Elobra. “These documents show anyone who wants to see that this is a plan that will bring about the expulsion of at least 40,000 people from their homes and the expropriation of most of the land under Bedouin ownership in the Negev.”

The activists called on Knesset members to listen to them and their objections to Prawer, vowing to continue protesting against it until the dozens of unrecognized villages in the Negev are recognized and connected to state infrastructure.

Related:
Prawer Plan: How the natives became invaders in their own homes
The historical truth about Bedouin expulsion from the Negev