my dark holiday clothes and walked to the Old City of
Jerusalem.

For a long time I stood in front of an Arab’s hole-in-the-wall
shop,

not far from the Damascus Gate, a shop with

buttons and zippers and spools of thread

in every color and snaps and buckles.

A rare light and many colors, like an open Ark.

I told him in my heart that my father too

had a shop like this, with thread and buttons.

I explained to him in my heart about all the decades

and the causes and the events, why I am now here

and my father’s shop was burned there and he is buried here.

When I finished, it was time for the Closing of the Gates
prayer.

He too lowered the shutters and locked the gate

and I returned, with all the worshippers, home.

(By Yehuda Amichai, “Jerusalem 1967”, translation by Stephen Mitchell as published by NPR)

If one were to place Jewish holidays on a continuum ranging from those between oneself and fellow man, i.e. those grounded in our surroundings, and those between man and God, Yom Kippur would at the very edge of the latter end of the scale. It is the day most clearly intended to gather for dialogue with oneself and with God.

That is where Amichai’s poem draws its power, and the reason I love it so — even on this day, or perhaps especially on this day, it doesn’t cease seeing those people around us, the Other, in this case the Arab shop owner in Jerusalem’s Old City.

He stands and speaks with him, even if in his heart, even if it’s a difficult conversation, instead of going to prayers, and imagines the store as the Holy Ark of a synagogue, nothing less. His conversation with the Other, his ability to see the Other at all, winds up taking the place of prayer on the holiest day of the Jewish calendar. That is astonishing to me.

By the time I write this Israel will have already placed a full military closure on the Palestinian territories ahead of Yom Kippur. East Jerusalem will be completely shuttered. Millions of people will be imprisoned in their homes so we Jews can speak with God. What value does such prayer have if it necessitates such a violent injustice, one that erases the Other from our field of vision? 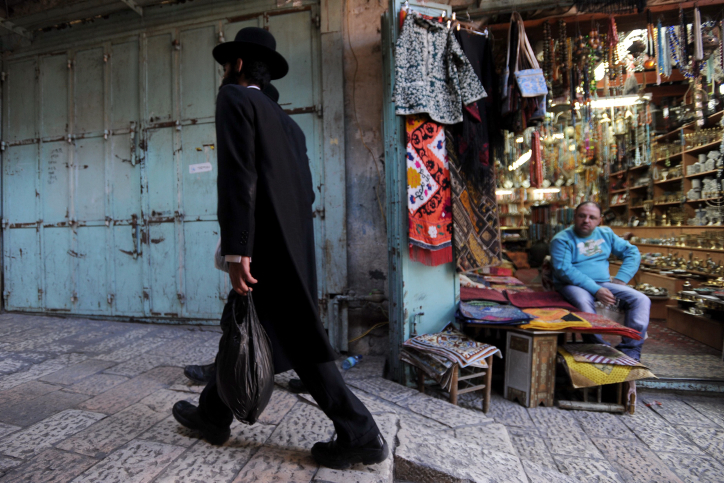 Illustrative photo of an ultra-Orthodox Jewish man walking past an Arab shopkeeper in the Old City of Jerusalem. (Gil Yaari/Flash90)

This article first appeared in Hebrew on Local Call.