An unprecedented letter by former European leaders and peace process veterans recognizes Western support for the occupation and calls for immediate steps that will bring an end to it. 13 European states support labeling products from Israeli settlements. 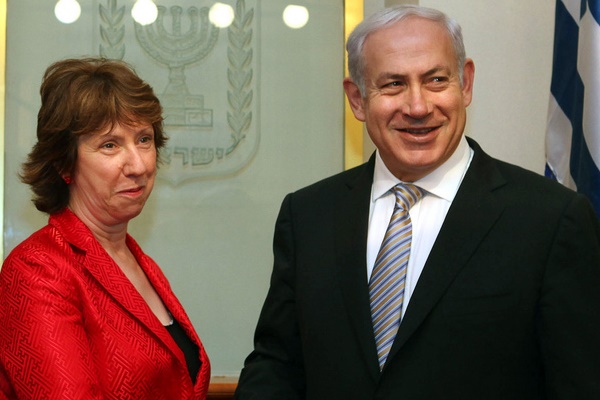 Catherine Ashton and Israeli Prime Minister Benjamin Netanyahu. Past statements, wrote the officials, have “not been matched by any action likely to improve the situation” (European Union / CC BY-NC-ND 2.0)

A group of senior former European officials, including former prime ministers, foreign ministers and diplomats, is urging the European Union to abandon the Oslo process and come up with new urgent measures that will put an end to the occupation, Ali Gharib reports for Open Zion. In a letter addressed to the Representative of the Union for Foreign Affairs and Security Policy for the European Union, Catherine Ashton, the former officials write:

We are […] appealing to you, and through you to the members of the Council of Ministers, to recognize that the Peace Process as conceived in the Oslo Agreements has nothing more to offer. Yet the present political stalemate, while the situation deteriorates on the ground, is unsustainable.

Perhaps the letter’s greatest novelty is a recognition that the West is contributing to the occupation. “It is time to give a stark warning that the Occupation is actually being entrenched by the present Western policy,” wrote the former officials.

The signatories of the letter express disappointment from the (lack of) leadership on the part of the U.S., and are now calling for “a realistic but active policy,” which will include a recognition of the state of affairs in the West Bank as occupation; an action against the erosion of the ’67 borders by Israel, and perhaps most important – a re-evaluation of the financial arrangements with regards to the Palestinian Authority (in other words, the 19 signatories want the EU to stop bankrolling the occupation).

The letter has no formal bearing, but that fact that it includes some of the senior EU officials who dealt with the Middle East peace process attaches an extra value to it. This is also a clear vote of no-confidence for the American leadership, perhaps due to the degree of Israeli influence over U.S. foreign policy in the region.

A fundamental change in EU policy is somewhat unlikely, mainly due to the consensus mechanism which is used to determine foreign policy. Out of the 27 member states, there are always a few governments – even one is enough – who back the Israeli policy in the occupied territories, or at least oppose any effective measures against it. Currently, the Czech Republic is considered the most supportive of the Israeli policies.

The following is the full letter which was sent to Representative Ashton by the former EU officials:

We, the under-signed members of the European Eminent Persons Group on the Middle East Peace Process, are writing to you to express our strong concern about the dying chances of a settlement based on two separate, sovereign and peaceful states of Israel and Palestine.

The Eminent Persons Group is composed of a number of former Presidents, Prime Ministers, Ministers and senior officials of EU Member States who have decided to concert their efforts to encourage a lasting settlement of the Israeli-Palestinian dispute.

We have watched with increasing disappointment over the past five years the failure of the parties to start any kind of productive discussion, and of the international community under American and/or European leadership to promote such discussion. We have also noted with frustration and deep concern the deteriorating standards of humanitarian and human rights care of the population in the Occupied Territories. The security and long-term stability of Israel, an essential objective in any process, cannot be assured in such conditions, any more than the legitimate rights and interests of the Palestinian people.

President Obama made some of these points during his March 2013 visit to the region, particularly in his address to the people of Israel, but he gave no indication of action to break the deep stagnation, nor any sign that he sought something other than the re-start of talks between West Bank and Israeli leaders under the Oslo Process, which lost its momentum long ago.

We are therefore appealing to you, and through you to the members of the Council of Ministers, to recognise that the Peace Process as conceived in the Oslo Agreements has nothing more to offer. Yet the present political stalemate, while the situation deteriorates on the ground, is unsustainable, given the disturbed politics of the region and the bitterness generated by the harsh conditions of life under the Occupation.

The concern of the European Union at this deterioration, clearly expressed in a series of statements, not least the European Council Conclusions of 14 May 2012, has not been matched by any action likely to improve the situation. The aspirations of Palestinians and Israelis and the interests of the European Union, prominently referred to in those Conclusions and in other relevant EU documents, cannot be met by the current stagnation.

It is time to give a stark warning that the Occupation is actually being entrenched by the present Western policy. The Palestinian Authority cannot survive without leaning on Israeli security assistance and Western funding and, since the PA offers little hope of progress towards self-determination for the Palestinian people, it is fast losing respect and support from its domestic constituency. The steady increase in the extent and population of Israeli settlements, including in East Jerusalem, and the entrenchment of Israeli control over the OT in defiance of international law, indicate a permanent trend towards a complete dislocation of Palestinian territorial rights.

We have reached the conclusion that there must be a new approach. Letting the situation lie unaddressed is highly dangerous when such an explosive issue sits in such a turbulent environment.

A realistic but active policy, set in the context of current regional events, needs to be composed of the following elements:

– a sharper focus on the essential need for a two-state solution, as the most likely outcome to offer lasting peace and security for the parties and their neighbourhood and the only one recognised by UN resolutions as just and equitable;

– an explicit recognition that the current status of the Palestinian Territories is one of occupation, with responsibility for their condition falling under international law on the occupying state;

– an insistence that Israeli settlements beyond the 1967 lines are illegal, must cease being expanded and will not be recognized as one of the starting points in any new negotiations;

– a stipulation that any representative political organisation with a valid claim to participate in negotiations must renounce the use of violence outside established UN norms;

– the renewal of efforts to establish a unified Palestinian representation of both the West Bank and Gaza, without which a comprehensive peace cannot be successfully negotiated and the absence of which serves as an excuse for inaction;

– the encouragement of reform of the Palestinian Liberation Organisation, including representation of all the main Palestinian parties committed to non-violence and reflecting the expressed wishes of the resident Palestinian population in the West Bank and Gaza;

– a vigorous international drive for the implementation of much improved humanitarian and human rights conditions in both the West Bank and Gaza, monitored by the United Nations, whatever the state of peace negotiations might be at any time;

– a reconsideration of the funding arrangements for Palestine, in order to avoid the Palestinian Authority’s present dependence on sources of funding which serve to freeze rather than promote the peace process;

– a clear and concerted effort to counter the erasing of the 1967 lines as the basis for a two-state outline. This should include a clear distinction in EU dealings with Israel between what is legitimate – within the 1967 lines – and what violates international law in the Occupied Territories;

– a clearer willingness within the EU to play a political and not just a funding role and to resume a more strategic dialogue with the Palestinians.

For all the good sense of EU statements on this issue over the years, the EU’s inactivity in the face of an increasingly dangerous stagnation is both unprincipled and unwise. European leaders cannot wait for ever for action from the United States when the evidence accumulates of American failure to recognize and promote the equal status of Israelis and Palestinians in the search for a settlement, as accepted in United Nations resolutions.

Later generations will see it as unforgivable that we Europeans not only allowed the situation to develop to this point of acute tension, but took no action now to remedy the continuing destruction of the Palestinian people’s right to self-determination. We regard it as essential for EU interests that the Council of Ministers and you take rapid action to correct this unacceptable state of affairs.

We are sending copies of this letter to Members of the Council of Ministers and to the US Secretary of State.

Members of the EEPG send you their respectful greetings.