How can a nation that seems to share Israel’s history be friends with Iran? How can it not. 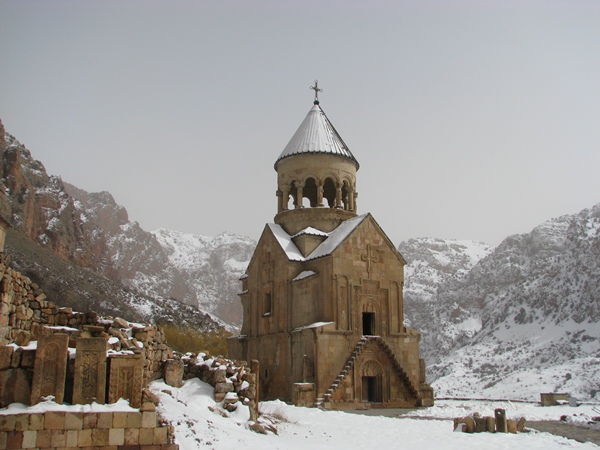 I’ve heard it said that if there is one thing Israel would enjoy, it would be to have another Hebrew-speaking country somewhere in the world to break its loneliness. The exchange of ideas and attitudes between two different societies that share a common language is a powerful catalyst for growth of all kinds.

Language isn’t the only thing people share, however, and indeed there is one nation out there that seems to share our history: It traces its roots back to Biblical times, it has known an atrocious genocide over the past century and finds itself at odds with its mainly Muslim neighbors.

The country these people inhabit, known to them as Hayastan, to us as Armenia, is only slightly larger than Israel. Like Israel, it shares borders with four other countries, and as is the case here, only two of those borders are open for travel. Besides all of that, there remains the complex relationship with a vast worldwide diaspora, and of course the love of kebab. 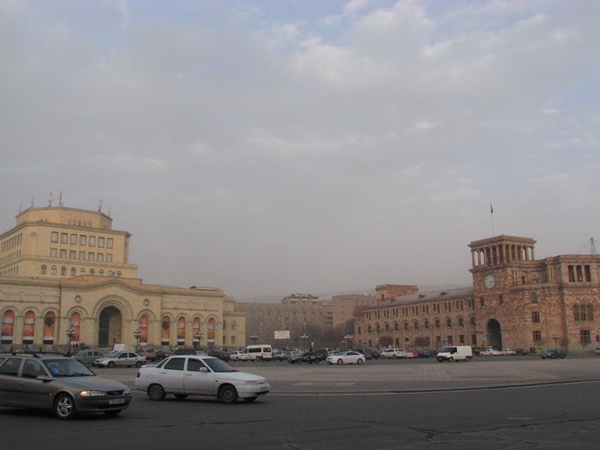 Upon arrival in Armenia, I instantly noticed another, more symbolic common denominator, which may in fact be said to be shared by three nations. From the airplane’s window I could clearly see mount Ararat, its highest peak, a full 5168 meters above sea level. This mountain, a symbol of the Armenian nation, is located across the border, inside Turkish territory following the 1923 treaty of Lausanne, which established post WWI regional borders without the participation of Armenian representatives.

Since then, the ever visible Ararat, despite being the traditional landing place of Noah, from whom Armenians trace their ancestry is only barely reachable for Armenians. This snow-white manifestation of a national identity, which appears clearly over the rooftops of Yeravan, which is so frequently used in Armenian brand names, which decorates Armenian walls, book covers and gravestones – is as distant as it appears near. 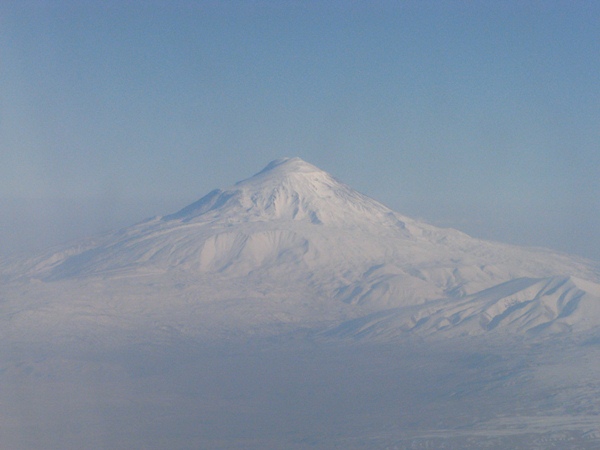 The sight instantly brought to my mind the Jewish longing for Jerusalem as a symbol, one that remained ever so strong so long as it was out of reach. Only later did I think of actual Jerusalem’s lights, so visible from the environs of Amman and even from central Ramallah. Not only Israelis may identify with the Armenian fate. Palestinians, a nation spread around the world, bearing the wounds of an historical disaster, would likely find something of a mirror image here too.

Even without Ararat, Armenia is a land is full of marvels: such as the ancient Noravank monastery, perched omong rocky cliffs, the spectacular pagan temple at Garni, and Yerevan’s peculiar “Cascade” monument. All monuments mentioned above were renovated in recent decades thanks to donations from affluent Armenians living around the world.

Diaspora Armenians tend to experience a strong connection to their heritage, yet very few have ever visited the historical homeland. Take Californian rock band “System of a Down,” whose four members are of Armenian origin, which is seen here as another symbol of Armenian success (others include composer Aram Khacheturian, novelist William Saroyan and chess master Gary Kasparov). The band has never played Yerevan, and its local fans are still waiting.

In a meeting with Armenia’s prime minister, Tigran Sargsyan, at his office on Republic square in Yerevan, I brought up Israel’s “Taglit-Birthright” program, and asked him what his government does to maintain contact with the diaspora, particularly with the younger generation. Sargsyan admitted that 95 percent of ethnic Armenians have never been to Armenia, but claimed that his administration is investing heavily in changing this reality. 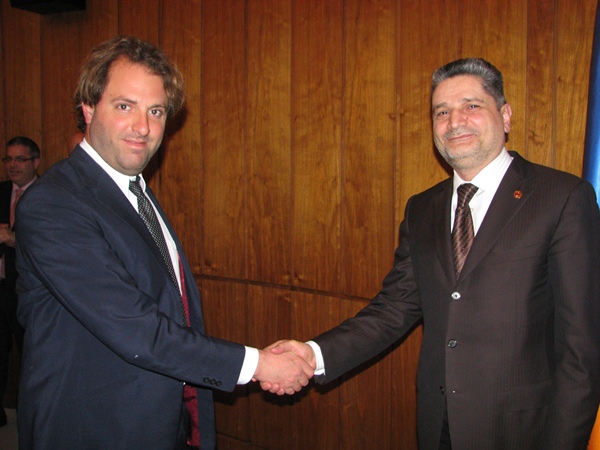 The author with Prime Minister Sargsyan at his office.

“We established a diaspora youth organization, as well as a foundation supporting bright Armenians in the best universities of the world,” the prime minister said. “This way, young Armenians interact with each other. The ministry of education organizes summer schools, as well as a program entitled ‘come home.’ Young Armenians come and live for a year in Armenia, we make them familiar with it.”

Do they stay? Rarely. but one could hardly expect a wave of Armenian “aliyah.” At present, the economic state of the country is difficult. The scars of Soviet times are so visible that they can hardly be described as scars. They are, indeed, the rule, out of which exceptions like the pleasant center of Yerevan are rising little by little. The median monthly income stands at about $300, and the countryside is exceedingly poor, as are many urban neighborhoods. Armenia is working hard on developing a brighter future, but the process is a slow one. 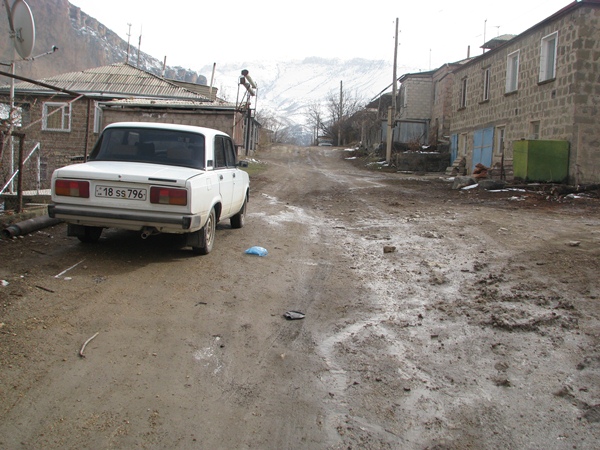 A typical street in Areni, a village in Vayots Dzor province, southern Armenia.

One factor that has greatly stalled Armenia’s development is its struggles with its neighbor Azerbaijan. A peace treaty between the two was signed in 1993, nearly twenty years ago, but bitterness remains.

On my visit, I obtained a booklet describing the desecration of Armenian religious monuments in the Azeri-controlled region of Nakhchivan, where no Armenians remain. The images included would have appeared familiar to Palestinians, so much do they recall the memory of the Nakba. One shows a wrecked village, where Armenians once lived. Another shows a church steeple from which the cross was removed and replaced with an Azeri flag. The booklet fails to mention the condition of mosques in the currently Azeri-free region of Nagorno Karabach.

The biggest historical scar, however, remains that of the Genocide committed against the Armenians during the first two decades of the 20th century by Ottoman Turkey. Israel, like all but a handful of nations, refuses to recognize the Armenian Genocide.

It is the need for maintaining a good relationship with Turkey that has prevented such recognition so far. Would Israel go ahead and show Armenia the solidarity of another wounded nation, now that this relationship is anyhow damaged? It remains to be seen. In the meantime, the little a visiting Israeli can do is to pay respect to approximately 1,500,000 at the monument and museum placed on a hill overlooking Yerevan.

The site is much like a small Yad Vashem, and while photographic evidence of the horrors is scarce, and the communication with visitors who are less versed in the history somewhat flawed, it communicates a great grief. 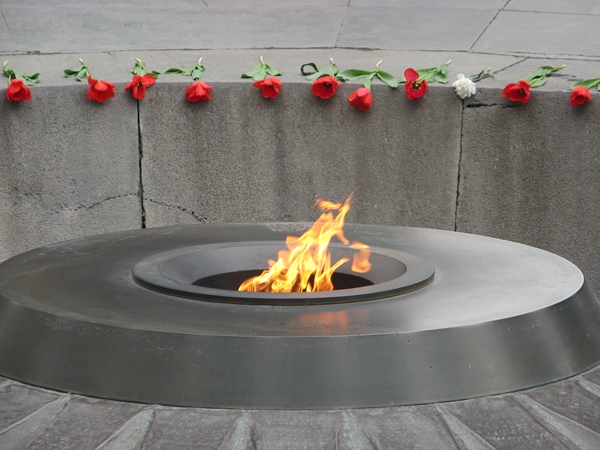 Having explored the similarities, one difference must be acknowledged. While Israel seems to be gearing itself for a potentially disastrous war with Iran, Armenia enjoys particularly good relationship with its southern neighbor. It is, indeed, expecting thousands of Iranian tourists to arrive this coming week to spend their annual Nowruz vacation drinking good brandy and eating forbidden pork in Yerevan. During my visit I enjoyed several pleasant chats with visiting Iranians (we preferred football to politics, for obvious reasons) and saw a great deal of commercial traffic moving down the road leading to the border in both Armenian and Iranian trucks.

When asked about Iran, Prime Minister Sargsyan emphasized Armenia’s landlocked situation. “We are relying on our neighbors, particularly on Georgia, to provide us contact with the world, and we must be sure to keep our gateways diverse. This is why maintaining a good relationship with Iran is important to us. We also remember that Iranians have been historically friendly with our nation, especially in times of need, and have sheltered Armenians during the time of the Genocide.” 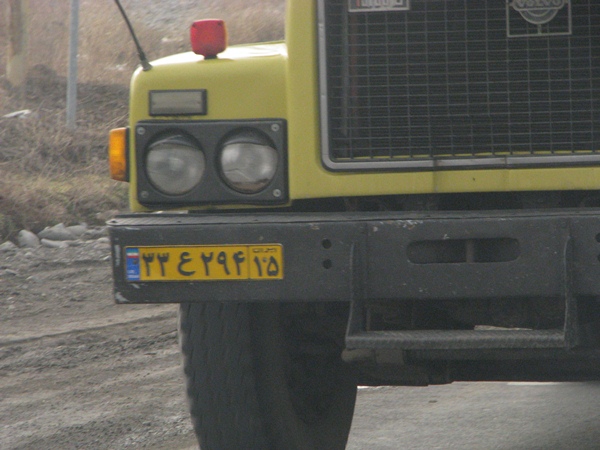 In our conversation, the Prime Minister stated sharply that Armenia “is opposed to an Israeli attack on Iran, which is sure to cause destabilization in the entire region.” This is not the warning of an estranged twin, but of a true friend and a neighbor down the block. As the plane took off over the Ararat back to the highly explosive homeland, I could only wish our countries were similar in this position as well.