+972 speaks with Jessica Montell, of B’Tselem – The Israeli Information Center for Human Rights in the Occupied Territories, about the settlements and occupation staring the Israeli public in the face, and communicating the human rights message effectively, at home and abroad. 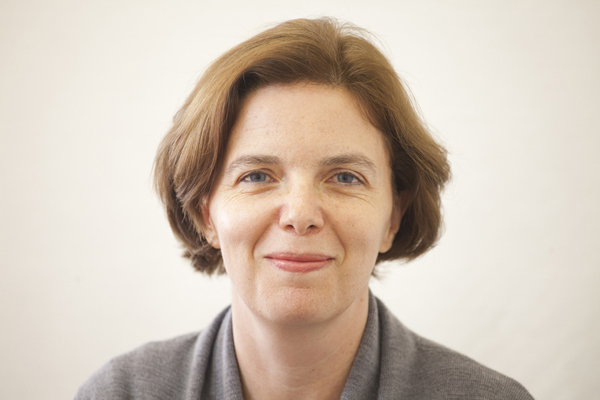 From her fourth floor office window in Jerusalem, Jessica Montell can see the red-tiled roofs of Israeli homes inside the settlement of Gilo, east of the Green Line, in annexed East Jerusalem. She can also see Givat HaMatos, another West Bank community, where Israel is planning a new settlement.

“It’s not an ivory tower,” she says of her office and the view it offers of the West Bank.

Montell, 45, has been the executive director of B’Tselem – The Israeli Information Center for Human Rights in the Occupied Territories for more than a decade. Originally from California, living in Jerusalem, Montell says B’Tselem plans to continue the public conversation about the IDF’s recent detention of a 5-year-old Palestinian boy in Hebron, which caused a stir in Israeli media after B’Tselem caught the incident on video.

Are human rights in the Occupied Palestinian Territories (OPT) more or less protected today compared to 2001 when you became B’Tselem’s executive director?

In terms of the headline-catching issues, the situation is definitely better today. In 2001, you had very severe restrictions, people living under curfew and high numbers of people killed and injured. You don’t have that today. At the same time the entrenched issues of occupation, settlements and control of natural resources, those are continuing and are even becoming further entrenched.

What human rights violations in the OPT are least reported on, by NGOs and the media? Why do you think those issues get less attention?

Issues that are not readily captured by video or photo are often underemphasized. The whole issue of military courts: hundreds of thousands of Palestinians have been detained, interrogated, tried in military courts, with extremely high rates of conviction. That’s something that is not accessible to most Israelis and very little attention is paid to it.

What human rights issues concern you most right now and why?

The main issue is settlements because they give rise to almost every other human rights problem in the West Bank today. Israel gives a lot of resources to settlements, but Palestinian development is restricted. More broadly, settlements dictated the route of the separation barrier, which gave rise to a series of other human rights violations, including access to resources, freedom of movement and infringements on the right to protest. So you see a chain reaction starting with settlements. For that reason it’s the priority issue for us in the West Bank.

On the one hand you have the diplomatic process, or the process to restart the process, and on the other hand an Israeli government that is quite explicit about supporting and expanding settlements. It’s very unclear how to reconcile those two things. For me, it’s impossible to reconcile them.

Were you surprised when you heard about the 5-year-old Palestinian boy recently detained by the IDF in the West Bank?

Yes. To take a 5-year-old really is something we hadn’t seen before. [On June 17] the commander of forces in the West Bank [GOC Central Command Maj. Gen. Nitzan Alon] acknowledged that it was wrong and that it was very important to reiterate to soldiers that they can’t be engaging in this type of behavior. So on that level it seems like we’ve succeeded.

What was your reaction when the IDF essentially called B’Tselem out in a press statement, and said, oh, they did it again, they released a video without talking to us?

It’s a classic example of blaming the messenger rather than engaging with the message. It’s clear now, a week later that the IDF acknowledges that what happened was wrong. The IDF spokesperson’s job is to make the military look good. But I would say, what makes the military look bad is not that B’Tselem captured the incident on video, but that the incident took place at all.

What strategies have been most effective in fighting to protect Palestinians’ human rights?

Video has certainly been extremely effective in getting people’s attention. When you have actual video evidence of crimes taking place it’s much more likely you’re going to get the investigation opened. You’re going to have people actually held accountable. In addition, video helps you get your foot in the door of opening up the conversation. Once people have seen a one-minute video then they want to know more, want to see the research and want to actually engage around these issues.

What motivates me is a belief in the importance of our work, a sense that we are both doing good work and having tangible effects on the ground and that we’re getting smarter and more creative. You see, both small cases, one person’s life that you have helped and made better, and changes in broader policies. That’s sort of the fuel that keeps us going.

What is the greatest challenge B’Tselem faces in promoting its mission today?

The apathy of the Israeli public. There is a disconnect between the Israeli public’s indifference and understanding the urgent, burning need to end military occupation of 2.5 million people. It’s urgent and burning both for the people living under occupation, whose rights are violated, and for Israeli democracy.

If you look broadly at what has been successful at changing the reality on the ground, every major human rights success is a combination of domestic and international advocacy. You can’t expect to ignore the Israeli public and hope that the world is going to save us from ourselves, and you can’t expect a domestic human rights constituency in isolation from the world to be effective either.

What has been the organization’s greatest accomplishment under your leadership?

I am proud of our accomplishments on two different levels. One in terms of policy changes: rerouting the separation barrier, stopping the policy of using Palestinians as human shields, changing the military’s accountability policies and ensuring that there are criminal investigations into the deaths of Palestinians. Those are concrete policies that have been changed for the better. But I would also say, more broadly, keeping issues of human rights and occupation on the public agenda and even expanding the reach of that message, both to the Israeli public and to important audiences internationally.