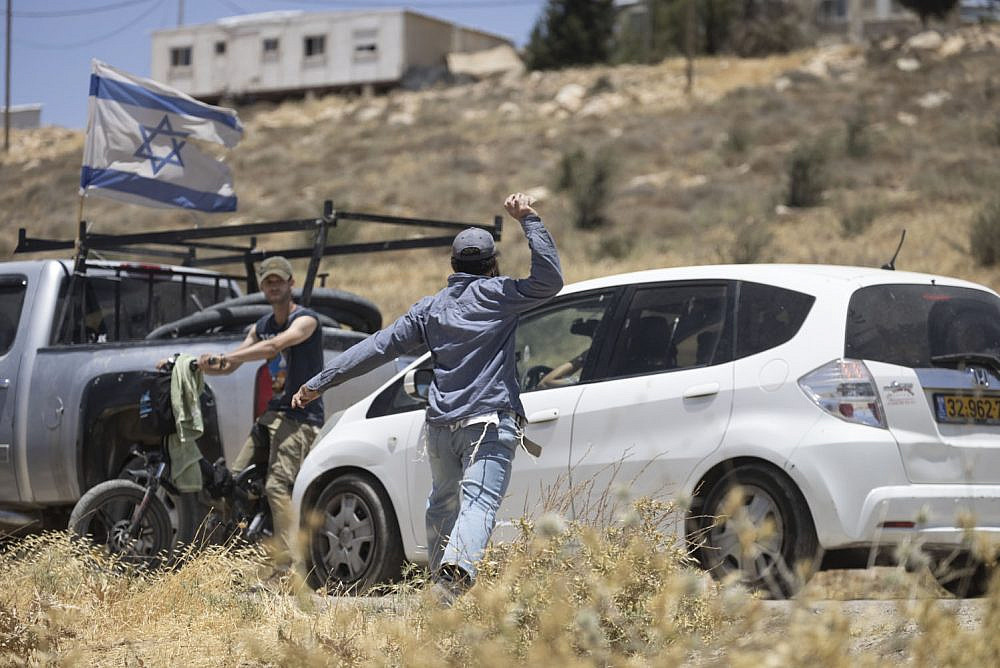 An Israeli settler throws a stone at the window of a car containing three left-wing Israeli activists, as another settler blocks their exit, outside the Mitzpe Yair outpost, occupied West Bank, June 10, 2022. (Oren Ziv)

On Friday, I saw with my own eyes how settler violence works and how the army and police stand aside, do nothing to prevent it, and do not arrest the violent settlers.

I saw a settler throw stones and smash the window of a car with left-wing activists inside while his friends blocked the activists from driving away; I saw soldiers watch the incident play out without doing anything; I saw the military’s brigade commander of the area arrive at the scene a few seconds after the attack and start chatting amicably with the driver who blocked the activists from leaving, while the attacker slowly retreated back toward the nearby outpost without anyone attempting to stop him; and I read how the Israeli army’s spokesperson described the violent event which took place before my eyes as “friction between settlers, activists, and Palestinians.”

The incident began early Friday afternoon as around 200 Palestinians, Israelis, and international activists from the Center For Jewish Nonviolence (CJNV) arrived to open a road near the settler outpost of Mitzpe Yair in Masafer Yatta, in the South Hebron Hills region of the occupied West Bank. The road leads to the Palestinian village of Bir Al-Eid, but Palestinians have been unable to use it since settlers illegaly blocked it with large boulders several months ago.

The demonstrators had also come to protest the decision of the Israeli High Court last month to authorize the expulsion of over 1,000 Palestinians who live inside what Israel calls Firing Zone 918. Since the court’s decision, home demolitions in the area have intensified.

The demonstrators tried to move the stones that blocked cars from using the road, but large numbers of Israeli soldiers and border police officers quickly arrived on the scene and immediately began repelling them with stun grenades and tear gas. About 20 settlers arrived to confront the demonstrators, and asked the army to disperse them. “We will slaughter you and your collaborators,” one settler called out toward the Palestinian activists.

As the protest came to a close, one of the Israeli activists arrived in her car to pick up two others who had been detained by Israeli forces and were released near the entrance to the outpost — at the exact moment that we, the journalists, were coming back to our cars which were parked in the same place. At this point, the settlers began attacking.

One of them, driving in a vehicle that was flying an Israeli flag, blocked the left-wing activists’ car from leaving onto the main road, while other settlers surrounded it. One settler, whose face was covered with a mask, approached and began throwing stones at the car. He smashed one of the windows, lightly injuring two of the activists inside.

As the activists reversed their car and tried to get away, Col. Yehuda Rosilio, the incoming brigade commander of the Judea area of the West Bank, arrived at the scene. Rosilio spoke calmly with the driver of the vehicle that blocked the activists’ car, and asked him to clear the road. 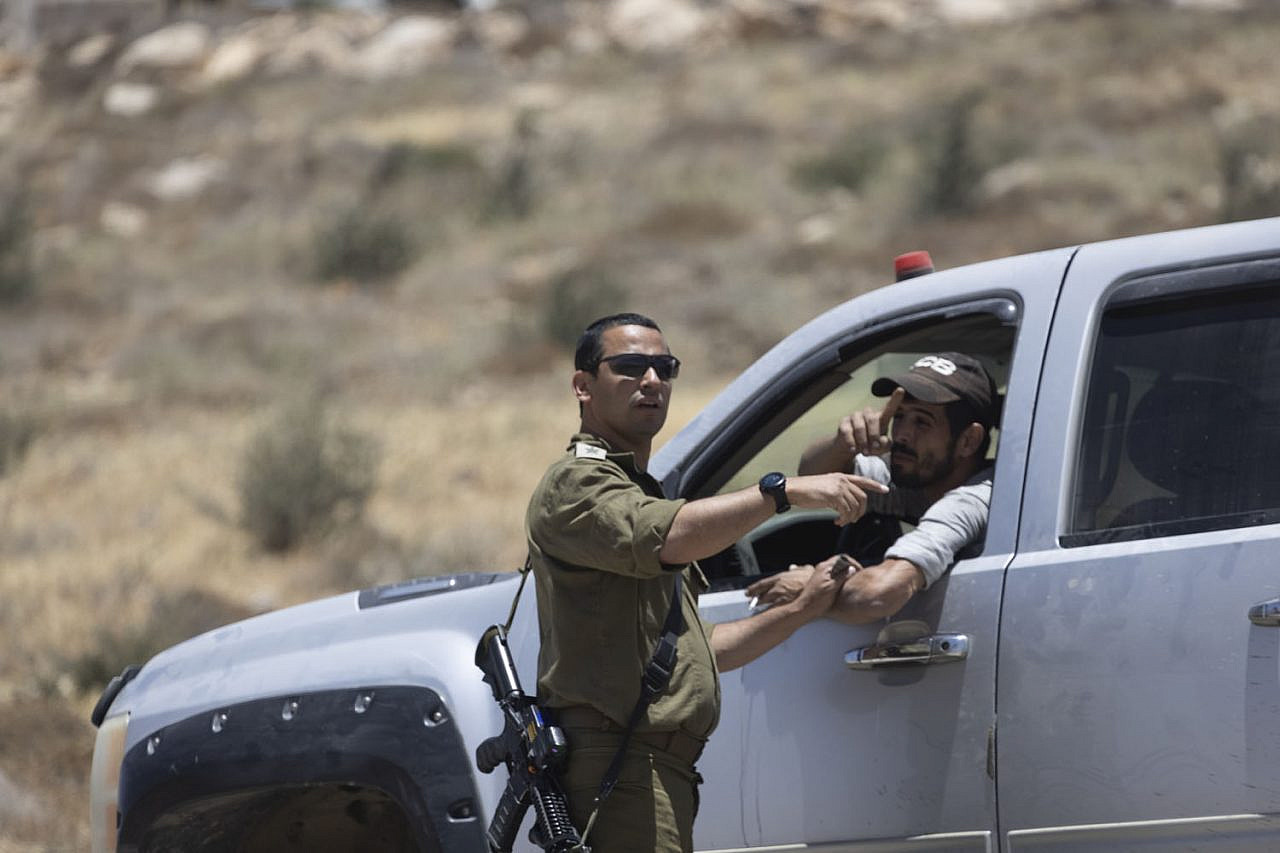 Col. Yehuda Rosilio, incoming brigade commander of the Judea area of the West Bank, speaks to the driver of the vehicle that blocked the exit of the car belonging to left-wing activists while another settler attacked it with stones, Masafer Yatta, occupied West Bank, June 10, 2022. (Oren Ziv)

A video documenting the incident shows the attacker fleeing in the direction of the Mitzpe Yair outpost; none of the soldiers attempts to stop him, despite them having full authority to do so. A veteran Palestinian journalist present at the incident rightly noted that, had the stone-thrower been a Palestinian, the brigade commander would almost certainly have pursued the attacker and possibly even shot him.

In another incident that was not caught on camera, settlers threw stones at the windscreen of the bus that had brought Israeli activists to the protest from Jerusalem and Tel Aviv, while the Palestinian driver was sitting inside.

Itai Feitelson, one of the activists inside the car that was attacked, said that two of the people inside the vehicle that was attacked were wounded by the shards of glass from the shattered window. “We turned to the police and the army who were present, but they didn’t detain [the attacker] and let him leave.

“They refused to take the information of the people who blocked our path,” he continued. “They just told us to leave and pushed us back into the car; one of the police officers banged my head against the door.” Feitelson added that only after they reached the intersection did the wounded activists receive medical treatment, before going to file a complaint with the police.

Shortly before blocking the activists’ vehicle, the settler had threatened reporters, claiming that they needed permission to film in the open area outside the outpost. In further documentation, the same settler was seen threatening Palestinian journalists and instructing them to move their vehicles back. Soldiers present at the scene did not interfere with the actions of the settler, who behaved as if he were the commander in the field.

Only on Sunday, after his photograph had been widely disseminated online, did the police finally locate and arrest the attacker. 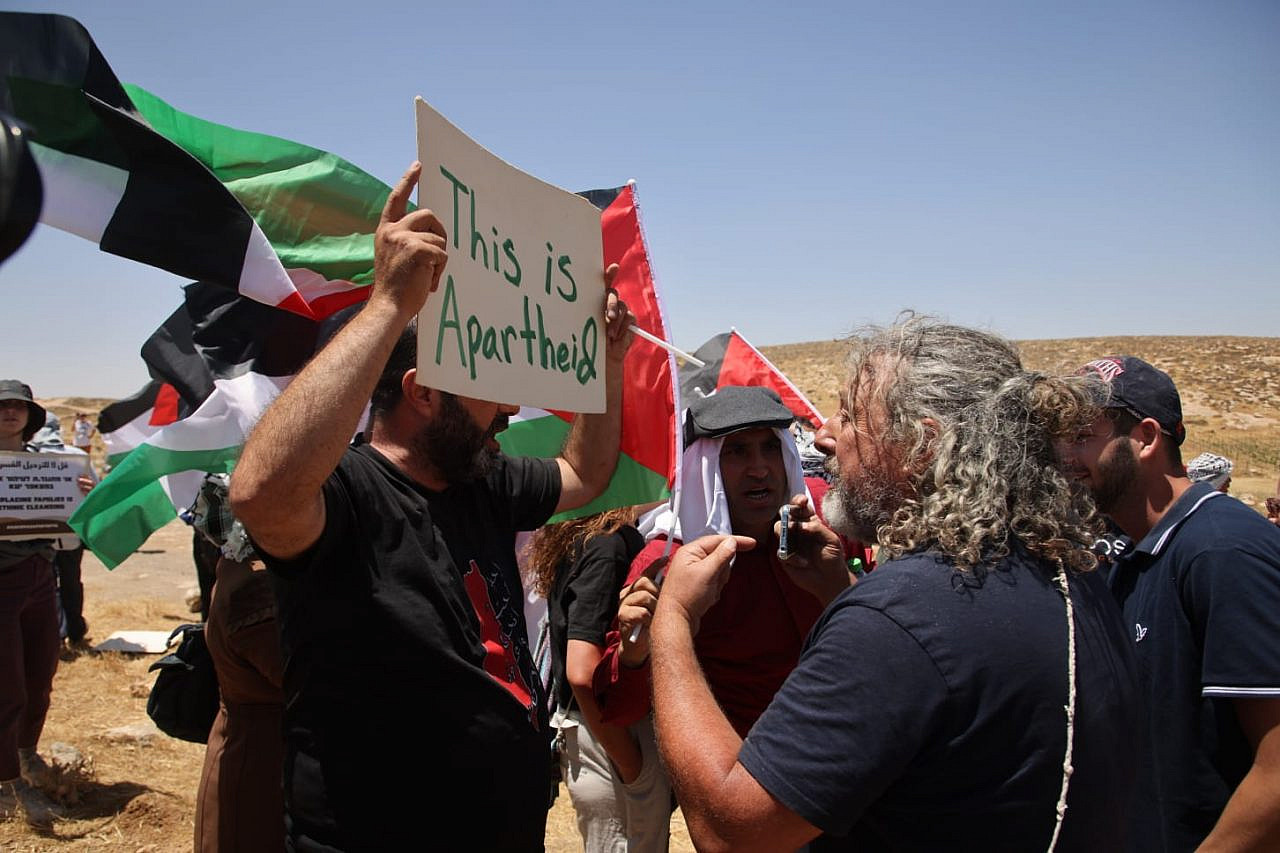 A Palestinian protestor holds a sign that says “This is Apartheid” in front of Israeli soldiers and settlers at a demonstration against the expulsion of the Palestinian communities who live inside what Israel calls Firing Zone 918, Masafer Yatta, occupied West Bank, June 10, 2022. (Oren Ziv)

‘Not in our name’

Ali Awad, a Palestinian activist from the village of Tuba (and regular contributor to +972), said that since the High Court decision authorizing the expulsion, Palestinians have been demonstrating every week outside the illegal settler outposts of Mitzpe Yair, Havat Ma’on, and Avigail. “They are [also] located inside the firing zone, but nobody is trying to evict them,” said Awad.

He added that the blocked road on which activists demonstrated on Friday leads to Bir Al-Eid, Jinba, and other Palestinian villages that are in danger of expulsion following the court’s decision. “The settlers blocked it a few months ago,” he explained. “It wasn’t the decision of the army, but they back up the settlers.”

Awad welcomed the presence of Israelis and international activists at the protest. “The strong cooperation between Palestinians, Israelis, and internationals is what generated the response from the army, and all of us were harmed by the stun grenades and tear gas,” he said. “Israel is trying to hide the reality of the occupation from Jews around the world, and we are glad that they came to see it for themselves.”

The CJNV delegation was made up of Jewish activists from the U.S., the U.K. and Canada. Rabbi Salem Pearce, originally from Houston, Texas, said that she came to stand in solidarity with the Palestinians who are in danger of being evicted from their homes after the court’s decision. “I refuse to believe in the idea of Jewish safety depending on the ongoing displacement and dispossession of Palestinians,” she said. “Safety will only come when we are all liberated.” 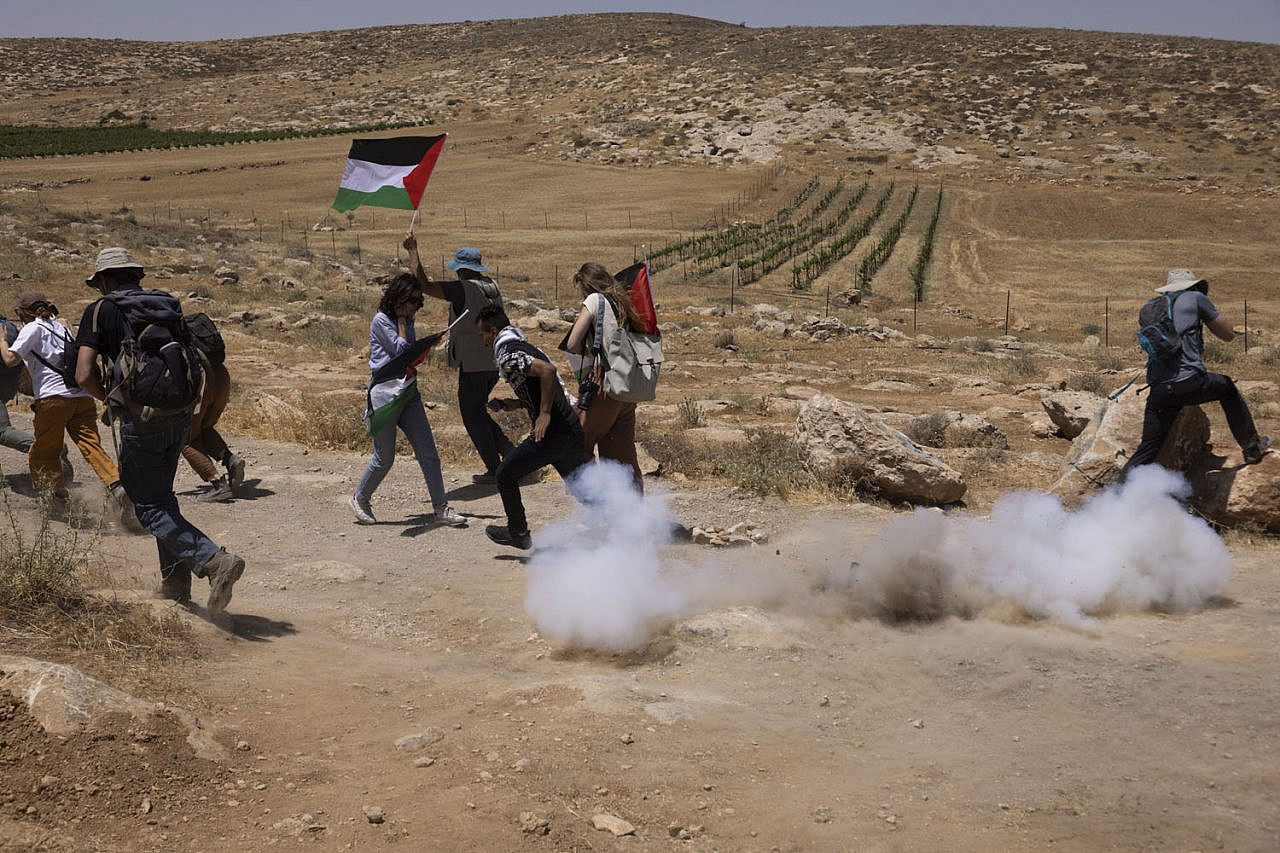 Another of the CJNV activists, Lizzie Horne Mozes, is a rabbinical student from Philadelphia. “It is a moral obligation of rabbis and future rabbis to be standing against the occupation,” she said at the protest. “The oppression by the Israeli government, the military, and the settlers here in Masafer Yatta is all happening in our name. As a leader in the Jewish community, it is my duty to stand up and say that this is inhumane and cannot be done in the name of our community.”

Sameeha Hureini, a Palestinian activist from the village of a-Tuwani in the South Hebron Hills, called on the international community directly to pressure Israel to stop the expulsion. “More than 1,500 Palestinians would become homeless refugees again,” she said. “We need your support and we need your voice with us.”

Not a matter of ‘friction’

The Israeli army spokesperson’s response to what happened on Friday warrants special attention. In their first statement, it was written: “Earlier today, a demonstration of activists took place in the area of Mitzpe Yair in the region of the Judea Territorial Brigade. About 250 people were present at the demonstration, including settlers, activists, and Palestinians. An IDF force was present at the site and declared a closed military zone in order to separate and prevent friction between the parties, and they were dispersed.” But as someone present at the scene, I can determine that this statement is false, as the settlers were not removed.

The spokesperson later claimed that “at another location, on the road leading up to Mitzpe Yair, a report was received of friction between activists driving in their car and a number of settlers throwing stones toward them. An IDF force that was present at the [protest] center identified the incident from a distance and acted to keep the settlers away. Police were called to the incident, the wounded were treated, and the incident was dispersed.” 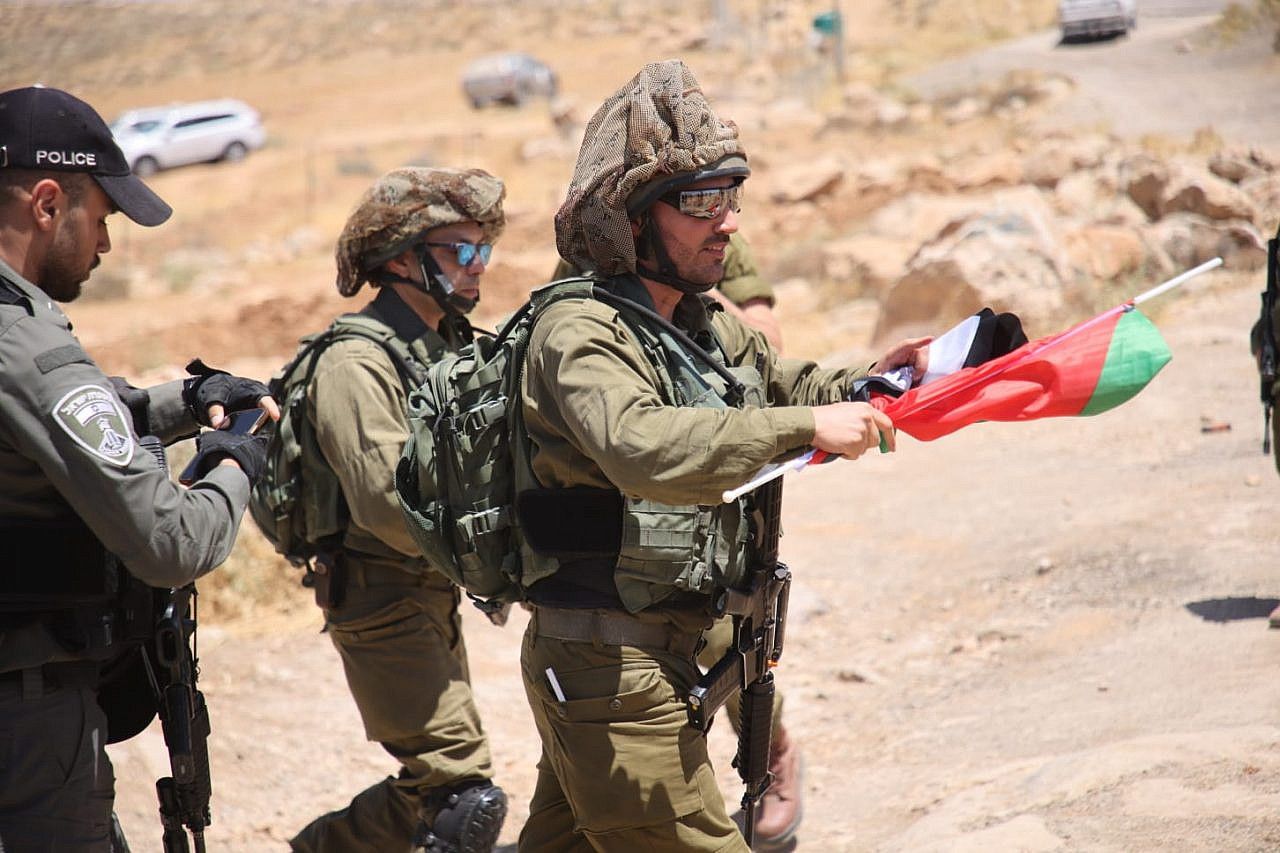 An Israeli soldier confiscates a Palestinian flag carried by a protester at a demonstration against the expulsion of Palestinian communities from what Israel calls Firing Zone 918, Masafer Yatta, occupied West Bank, June 10, 2022. (Oren Ziv)

This statement is also misleading. The attack took place around 300 meters from the protest, only 100 meters or so from the point where some of the army and police were camped. The army did not identify the incident “from a distance,” because it was on the scene. Brigade Commander Rosilio arrived at the scene of the attack less than 10 seconds after it began, as can be seen in the video footage.

And most importantly: the incident was not “friction.” It was a violent attack by a settler against left-wing activists which, just like settler attacks against Palestinians throughout the occupied West Bank on an almost daily basis, was allowed to occur without any army intervention.