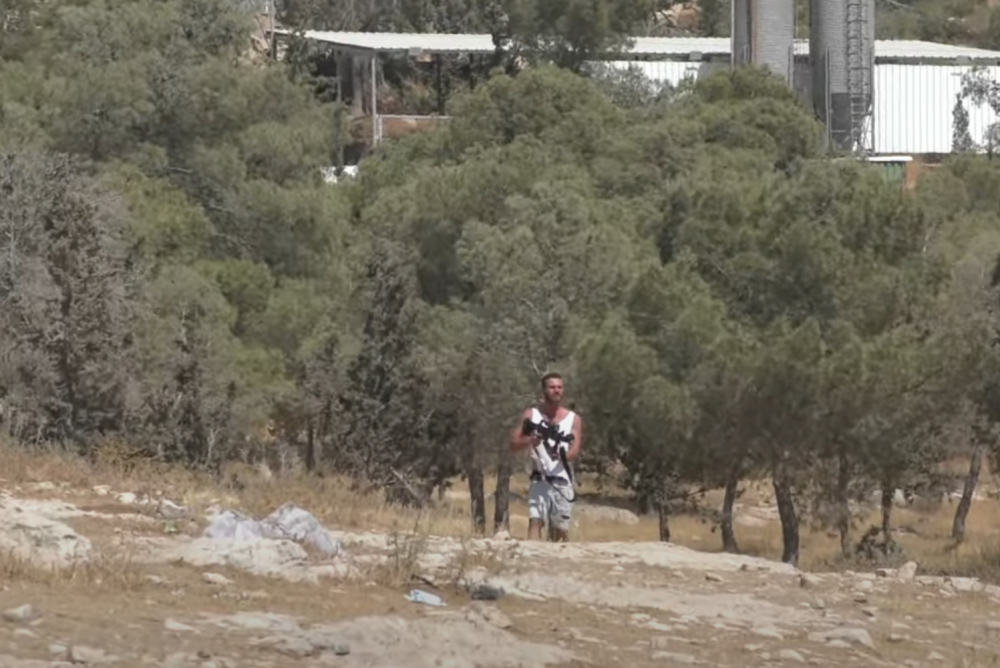 A settler fires at Palestinians from the village of a-Tuwani in the South Hebron Hills using a weapon he had grabbed from an Israeli soldier, June 26, 2021. (Screenshot from video by B'Tselem)

On June 26, during a settler attack on the village of a-Tuwani in the South Hebron Hills, a Jewish Israeli settler grabbed a weapon from an Israeli soldier and fired it at Palestinians. Local activists documented the incident on video, which was distributed by Israeli anti-occupation group B’Tselem.

“A group of settlers were hurling stones at our home,” said Jum’a Reb’i, a resident of a-Tuwani. At the same time, one of the settlers moved toward a military jeep that was at the scene and spoke to a soldier, who gave the settler his weapon, continued Reb’i. “Immediately after that, the settler stood before us and fired three bullets — directly at my house. I was very frightened, and was shaking. I tried to hide my children inside the rooms of the house. One soldier removed the shooter back toward the forest. The bullet missed my wife by only a few centimeters.”

An Israeli army spokesperson confirmed that a soldier handed his weapon over to a settler, and that the settler used it to shoot at Palestinians. According to the spokesperson, “a violent incident developed between settlers and Palestinians near Havat Ma’on,” during which “both sides threw stones, and fireworks were aimed at settlers. An Israeli soldier picked up a settler who asked to give him directions, and when they arrived, stones were thrown at the military vehicle. In response, the settler took the weapon from the soldier and fired into the air. No one was wounded. In light of the severity of the incident, the soldier was called in for interrogation and immediate investigation by the brigade commander, and procedures were clarified.”

Settlers have been coordinating attacks on Palestinians in the occupied West Bank for years, but based on my documentation of the incidents, together with a group of Palestinian activists, the attacks have increased in both frequency and intensity over the past few months, particularly on Saturdays. In some cases, the attacks involve cooperation between armed settlers and soldiers.

An investigation co-published by Local Call, The Intercept, and +972 Magazine documented four cases in which settlers and soldiers acted as joint militias in attacks on Palestinian villages in May, killing four Palestinian civilians. In two of the cases, in the villages of Urif and Asira Al-Qibliya, the attacks were documented on video. In Urif, where a Palestinian was killed, Palestinian eyewitnesses claimed that a masked and shirtless Israeli citizen who was documented opening fire at Palestinians received his weapon from one of the soldiers.

‘I cannot protect my family’

Unfortunately for Jum’a Reb’i, his house is located at the end of a-Tuwani, about 200 meters (less than 700 feet) from Havat Ma’on. This is the house closest to the outpost, and for years, Reb’i was always the first to suffer from settler violence. In the last two months, I have personally documented six such attacks on his home.

The proximity of Reb’i’s home to the outpost has taken a heavy personal toll on him. Over the years, settlers have smashed his car, beat his mother, wounded his relatives, broken the windows of his house, and stolen equipment. Now, the violence is getting worse.

On July 24, Reb’i was sitting in a garden outside his home. “I saw settlers from Havat Ma’on approach a well that belongs to my family, but the army removed them.”

A few minutes later, though, Reb’i saw the same group of settlers advancing toward his home, and realized they had begun throwing stones at the house. “My children and my brother’s children went outside. The women began calling on other residents to come quickly. I took out my phone [to document] and called activists in the area,” he said.

I was one of the activists Reb’i called. I ran to the area and started documenting the violence with my camera. In the video I took, which went viral on Instagram, one can see around 20 settlers — some of them masked — standing in the Havat Ma’on forest and throwing stones. They hit an older man in the head, and Palestinians threw stones at the attackers in response. The army then fired tear gas at the Palestinians, and pushed the settlers back to the outpost.

“The army did nothing at first,” said Reb’i. The soldiers “just stood there and allowed the attack to take place. Only when young people came from a-Tuwani to protect us from the attack did the army push the settlers back, but did not stop anyone. They [the soldiers] threw gas at us, and tried to arrest my brother because he yelled at them.”

“During such attacks I feel great helplessness,” Reb’i added. “I cannot protect my family. The children.”

Three years ago, in a similar attack, settlers from the outpost approached Reb’i while he was working on his land, knocked him to the floor, and beat him repeatedly with a pipe. He has been suffering from severe pain in his leg since, he said.

The military violently suppressed the demonstration, declared the area a closed military zone, and then arrested three journalists and activists, including a local elderly Palestinian man, Suleiman Hadalin. The army released everyone an hour later, but Hadalin was unable to walk, after soldiers reportedly handcuffed him, covered his eyes, and kicked him while he lay on the floor.

None of the protesters, including the journalists and activists who were arrested during the demonstration two weeks ago, engaged in any violence; they only documented the protest. The discrimination in enforcement is noticeable particularly in light of the fact that the police rarely arrest settlers when they throw stones at Reb’i’s house or open fire at Palestinians.

Given the rise in settler attacks, the military has declared the entire area between a-Tuwani and Havat Ma’on a “closed military zone” on Saturdays. It seems our documentation of these incidents has put pressure on the Israeli government to act. The settlers, however, continue to invade our land, while the order prevents Palestinians from working in their fields on Saturdays.