The Samaria Settler Council, the same group that recently released a video defaming human rights groups with anti-Semitic imagery, petitions the defense minister to stop Palestinians from participating in, and to pass a law banning an alternative Israeli-Palestinian Memorial Day ceremony. 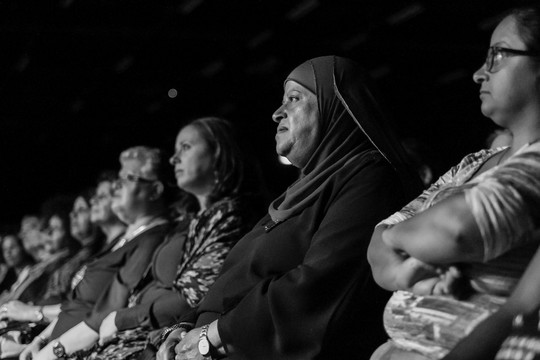 An Israeli settler group is trying to shut down the 10th annual joint Israeli-Palestinian memorial day ceremony put on by Combatants for Peace and the Parents Circle Families Forum, which is set to take place this Tuesday.

The Samaria Settler Council asked the Israeli defense minister not to grant entry permits to the Palestinian participants in the ceremony, which takes place on Israel’s national Memorial Day. Speakers in the event include bereaved family members from both sides of the conflict.

The Samaria Settler Council is the same group that produced a video earlier this year that used classic anti-Semitic imagery to suggest that Israeli human rights groups serve Nazi paymasters.

In its letter to the defense minister, the settler group referred to the Palestinians slated to participate in the joint memorial service as “the families of murderers.” The group further called on Defense Minister Moshe Ya’alon to advance legislation that would ban such events.

In an article with no byline on the website of “Ma’ariv,” which was recently acquired by the Jerusalem Post Group, the majority of which appears to have been copy pasted from a press release, the Palestinian participants are described as the families of “terrorists” and “terror operatives.”

A quick glance at the list of speakers at the joint Israeli-Palestinian memorial ceremony is enough to see that the portrait painted by the Samaria Settler Council is far from accurate. Along with bereaved Israeli families, scheduled to speak are: Mazen Faraj form the Daheish Camp, whose father was shot to death by soldiers while returning from work; and Yasmin Ishtayeh of Saalam village, who was born blind, and whose father was murdered by Israeli settlers.

One might expect such distortions from the Samaria Settler Council, but it is amazing how freely Ma’ariv reprinted the libelous accusations against these Palestinians.

By the time of publication the Defense Ministry had not responded to a request for comment on whether it would grant entry permits to those Palestinians who were scheduled to participate in the ceremony.

Two years ago, a similar request led to the denial of some 200 entry permits. Only after a threatened petition to the High Court of Justice and the intervention of a number of Knesset members, the Defense Ministry approved entry permits for 40 of the participants. Combatants for Peace released the following statement in response to the letter by the Samaria Settler Council:

In the ceremony we honor the memories of those who have fallen and share the pain of their families. That pain is not foreign to us. Many of us served in combat roles [in the army], some of us lost close family and friends. It is on us to remember and to remind that war is not our fate but a choice made by humans. On such a difficult day like [Memorial Day] we call on both sides to recognize the pain and hopes of those living on the other side of the fence and to try and prevent the next war. Just maybe, on next year’s Memorial Day, we won’t need to commemorate new victims.

In addition to settlers, criticism of the ceremony also can be found on the Palestinian side.

“I have Palestinian friends who are angry and who do not understand why I support such an event, but I am not afraid,” said Muhammad Salah of Bethlehem, a member of Combatants for Peace.

“I believe that we will only be able to bridge the gaps between the two peoples if more and more people participate in our activities,” Salah added, “and the ceremony is one way of convincing as many people as possible to take part.”

“We all took part in the cycle of violence,” said Michal Hochberg, coordinator of Combatants for Peace’s Tel Aviv-Nablus groups. “It is through our actions that we can show people the other side [of the conflict] through our personal stories, and the transformation that we went through.”

In addition to speeches, the details of which can be found here, a recorded message from Archbishop Desmond Tutu will be screened, in which he praises the event’s organizers.

Combatants for Peace is a movement made up of Israeli military veterans and Palestinians who were involved in the cycle of violence, all of whom chose to abandon the path of violence in favor of together ending the occupation. The Parents Circle Families Forum is an organization of over 600 Israeli and Palestinian families who lost loved ones in the conflict, and who chose a path of reconciliation. These are the people the Samaria Settlers Council is trying to stop from getting together, commemorating and mourning alongside each other. One can only hope that they fail.

Combatants for Peace is still trying to raise money for the ceremony, and is accepting donations here.

This article first appeared in Hebrew on our sister site, Local Call. Read it here.