Haaretz reports that settler leader Benni Katzover calls for dismantling democracy and “bowing to Judaism,” and the leader of the right-wing coalition aids “price tag” activists. Can we discuss the treason of the right yet?

The veteran settler leader, Benni Katzover, was caught (Hebrew) telling some meshigene Chabad paper, “Beit Mashiach”, that “I would say that today, Israeli democracy has one central mission, and that is to disappear. Israeli democracy has finished its historical role, and it must be dismantled and bow before Judaism. All the events nowadays are leading to the realization that there is no other way except putting the Jewish issue before any other issue, and that is the answer to all the situation and the threats.”

Referring to the struggle against gender exclusion, Katzover sailed on the seas of conspiracy, saying, “The leftist activists are cooking timed campaigns against anything that smells of holiness, and they have two goals: One is political – undermining the government and gathering bonuses in public opinion, and the other is to act against all the foundations of Jewish faith.” It’s an interesting look into a leading settler’s world: On the one hand, gender exclusion is “holiness”; On the other, leftists are Erev Rav – Amalekites who pretend to be, or believe themselves to be, Jews, who are seen as such, and yet whose whole existence is undermining “anything that smells of holiness.” Katzover, when asked for comment by Haaretz, confirmed his comments. 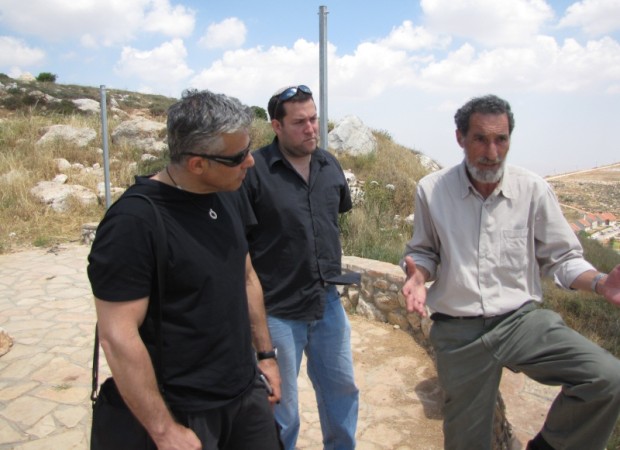 Benni Katzover (R) with Yair Lapid on a tour of the West Bank (photo: Yesha Council)

Katzover gains a point for no longer pretending, as most settler leaders still do, that he values democracy. Religious Zionism, as that pig who shows his cloven hoofs so that people will mistake it for a kosher animal, always claimed to support “Jewish democracy.” As anyone who actually studied in that world knows, democracy is described there as a Greek construct, alien to Judaism. When democracy is spoken of, the rabbis kept mentioning the biblical injunction “thou shall not follow a multitude to do evil.” It would be interesting to know how many settler leaders think like Katzover, but do not, as yet, dare say so openly.

This isn’t the only time Katzover was mentioned in the news lately. On Friday, Shahar Ginossar – who is showing himself to be one of the bravest reporters around – demonstrated in “7 Yamim”, Yediot’s weekend supplement, that Katzover, together with Gershon Messica, inspire the “price tag” campaign. The two of them discussed the attacks on the IDF and random Palestinians openly on some internal settlements publications, arguing that without “price tag” attacks, the settlers cannot prevent the removal of illegal outposts. The local council of Shomron, led in the past by Katsover and now by Messica, transferred funds – government funds – to finance what could have led to “price tag” attacks. Messica and Katsover also refrained, time and time again, from denouncing those attacks.

You didn’t have to be a strategic genius to believe that the “price tag” activists, breathlessly described by the media as anarchists over whom the settlement establishment has no control, are in fact Yesha Council of settlement’s special forces. After all, the weapon the Council used to threaten Israelis with for the past 30 years was the “extremists” over which it ostensibly “had no control.” Well, it seems at least some of its members did have control over them.

Will the Yesha Council cast out Katzover and Messica? That’s a funny one. Its disavowal of “price tag” attacks is only meant to preserve its normal position as the political arm of Jewish terrorism. It’s time to remind people that the legendary Yesha leader, Ze’ev “Zambish” Hever, is a convicted terrorist. In the early 1980s, he tried to blow up a Palestinian activist, Dr. Ahmed Natsha. The device didn’t go off, and due to “health concerns,” Hever – then called Friedman – got off with just 11 months in prison. Hever’s terrorist past didn’t harm him any, and that’s an understatement. At the time, of course, the leadership of Gush Emunim spoke of “extremists” just as it does now, while trying to conceal the metaphoric hissing fuse coming out of its pocket.

Yesha Council’s quiet support of Jewish terrorism is not limited to attacks on Palestinians. In January 1996, two months after the Rabin assassination, a yarmulka-wearing young man, Ohad Bart, tried to run Meretz minister Yossi Sarid’s car off the road. He was then a Bnei Akiva instructor. He kept his status – which he would have lost had he been caught eating in a non-kosher restaurant – and ten years later, in 2006, he was a  Yesha Council  functionary and a Knesset candidate on behalf of Ha’Ichud Ha’Leumi, a settler party.

We’re not finished yet. Katzover and Messica, along with their local council, may have inspired and supported “price tag” attacks, but today we learned (Hebrew) that the pogromchiks had a very prominent collaborator: MK Ze’ev Elkin, the chairman of the coalition. He does not deny passing information to “price tag” people telling them where the army was not planning to act, enabling them to deploy their forces in a more accurate manner.

Now, Elkin is obviously not a spy, just as the “price tag” people who gathered information on the army’s activities aren’t. The question whether Elkin is a traitor, however – in the moral sense of the word, not, naturally, the legal one – is more complicated. Elkin took an oath to maintain “loyalty to the State of Israel and to faithfully execute [his] calling in the Knesset.” When he gave information to the “price tag” people, which was supposed to derail military activity ordered by the lawful government, did he commit treason, or not? Let’s just say that Elkin is lucky to be a Jew and not an Arab; Otherwise the Knesset would already be discussing the removal of his immunity. As he is a Jew, it’ll be a surprise if even the Ethics Committee bothers itself with his perfidy.

So: We have a senior Yesha Council operative saying Jewish democracy must be dismantled or killed, while conspiring with another to support “price tag” attacks – aided and abetted by the leader of the right-wing coalition. Isn’t it time we asked some hard questions about the loyalty of the right, particularly the religious right, to Israeli democracy?