Settler organization Ateret Cohanim has been gradually kicking out every single member of the Kirsh family from their homes since 2010. 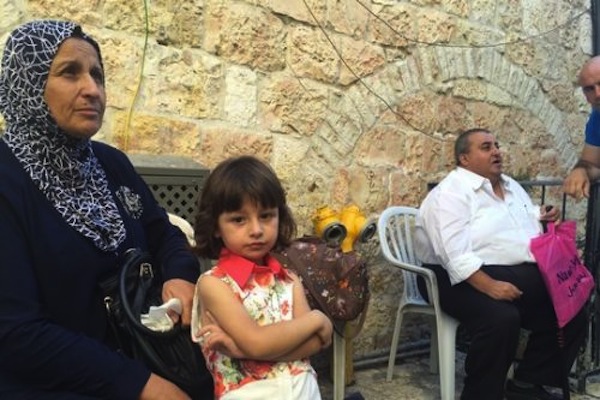 The Kirsh family is seen after being evicted from their home in Jerusalem’s Old City by a settlement organization. (OCHA)

Israeli police evicted a Palestinian family from their home in Jerusalem’s Old City earlier this week, at the height of the Muslim holiday of Eid al-Adha. The nine-member Kirsh family, which includes children and a pregnant woman, has been living in the same home since the 1930s.

Their home was transferred over to Ateret Cohanim — a settler organization known for taking over Palestinian assets in the Old City and turning them over to Jewish families — after it claimed to have purchased it in the 1980s. The home was part of a housing complex where seven of the brothers were renting apartments; six of them, along with their families, were evicted after Ateret Cohanim began taking over the building in July 2010. Today the last of the seven brothers was evicted.

The eviction follows years of legal proceedings that began at the end of the 1990s, after Israel’s Supreme Court rejected the appeal trying to stop the eviction last May.

The eviction is part of a wider takeover of Palestinian assets in East Jerusalem by well-funded settler organizations, specifically the area known as the “Holy Basin,” which surrounds the Old City from the south, east, and north. According to Jerusalem-based civil rights group, Ir Amim, settler organizations are presently involved in eviction proceedings against at least six Palestinian families in the Muslim Quarter.

There are around 80 Jewish settler families currently living among the 33,000 Palestinians in the Muslim and Christian quarters. These enclave-settlements are generally protected by private security, which terrifies the Palestinian residents and restricts their movement. When the police are forced to intervene, they choose the side of the settlers. Palestinians in East Jerusalem, who do not live under the Palestinian Authority, are left without any protection.

Ir Amim responded to the eviction:

We have yet to calm down following Netanyahu’s comments on ‘ethnic cleansing,’ and here we see another Palestinian family evicted from their home in East Jerusalem. The fact that Israel Police chooses to carry out this eviction at the height of Eid al-Adha, which is holy to Muslims, proves that it will take all measures to carry out the government’s policy of Judaizing the Holy Basin in East Jerusalem.