The Judea and Samaria Police outdid itself by closing a case of shooting at a Palestinian for ‘lack of criminal culpability.’ 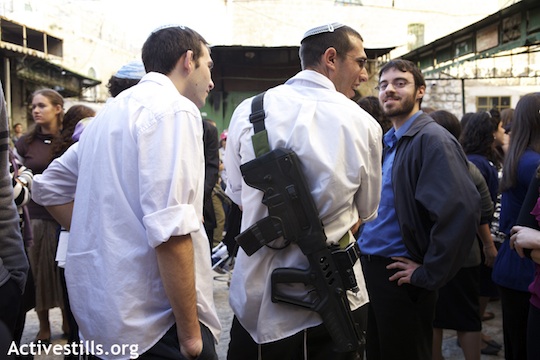 This blog has dealt extensively with one of the most dysfunctional organizations around, to wit, the Judea and Samaria Police District (JSPD), which manages to look even worse than regular Israeli police. (Judea and Samaria is the name used by Israel to describe the West Bank.) That should have immunized yours truly from being shocked by it; and yet, our volunteers are now helping search for my dropped jaw.

Let’s begin with the facts: there is a village called Burin. Unfortunately for it, it is adjacent to a series of settlements and illegal outposts. One of the latter is Givat Ronen. In the Palestinian house closest to the outposts lives a man called Bruce Lee (after the famous Karate star) Eid. He and his family members have been suffering violence and abuse by the settlers for quite some time.

At the beginning of April, Bruce-Lee Eid lodged a complaint with the JSPD about three related incidents. In the first one, which took place on March 31, Bruce-Lee Eid noticed a settler he is familiar approaching his house; the settler is called R. In his complaint, Bruce-Lee Eid noted he knows R. since the latter tends to herd his flock on Bruce-Lee Eid’s lands. R. was accompanied by a minor and a third person. According to the complaint, R. threatened to murder Bruce-Lee Eid, and at one point drew a gun and fired into the air. The minor and the third person began chasing Bruce-Lee Eid and his family members into the house, while the minor pointed at them what appeared to be an M-16 assault rifle and vocally made firing sounds. A military force reached the scene, drove off the settlers, detained the minor and reach the conclusion the rifle was fake, but refrained from arresting them.

The third incident took place on the next day, April 2. A group of settlers – about 20 of them – came to Bruce-Lee Eid’s house and began stoning it. Soldiers reached the scene, dispersed the settlers, but – as usual – did not arrest them.

The police closed the file. The fact that the JSPD can’t do its job no longer surprises us; what shocked us was the reason it gave for closing the investigation. Generally the JSPD goes with “unknown perpetrator.” The JSPD is extraordinary in its ability to avoid doing its job and fail to recognize felons even when the victim provides it with the perp’s phone number (Hebrew); however, this time the case was closed because of “lack of criminal culpability.”

How do you shelve away a shooting incident and a threat with “lack of criminal culpability?” Well, the JSPD claims – with justification – that the rifle which was used by the minor in the first two incidents was fake. The ability of the JSPD to ignore the facts is astonishing: the minor was not the one to shoot. So did the settler, R., whose pictures were turned over to the police by Bruce-Lee Eid. The police simply disregarded this fact. The case file, as shown to us, contains but two documents: Bruce-Lee Eid’s original complaint, and a check made with the army about the detention of the minor with the fake rifle.

All of this begs the conclusion that the JSPD does not want to investigate felonies committed against Palestinians, whenever scary settlers are involved. It wants Bruce-Lee Eid to stop pestering it with complaints, and if that means he will have to abandon his house for fear of the marauders, that’s sad but such is life when your neighbors live in an outpost. That’s what the outposts are for, after all.

And yet, in the JSPD’s book of shame, the words “lack of criminal culpability” will be written in capital letters, since they show that threatening Palestinians and shooting at them are, as far as the JSPD is concerned, not something to be investigated seriously, but rather a nuisance. For it is policemen, of course, who have to waste time with complaints they have no intention of investigating.

We intend to force the JSPD to justify its public funds and conduct something which may even resemble an investigation. Attorney Noa Amrami has appealed this embarrassing decision on our behalf, noting that, “it seems the investigative authorities choose to overlook every basic tenet of running an investigation, and mock and scorn the rights of my client to live in safety and to see justice done to the felons who have been harassing his family for years. When the children of my client, aged eight and ten, live in fear and terror and do not want to leave their house for fear of being harmed with no warning, this is plain and simple terrorism.”

Right on the money.