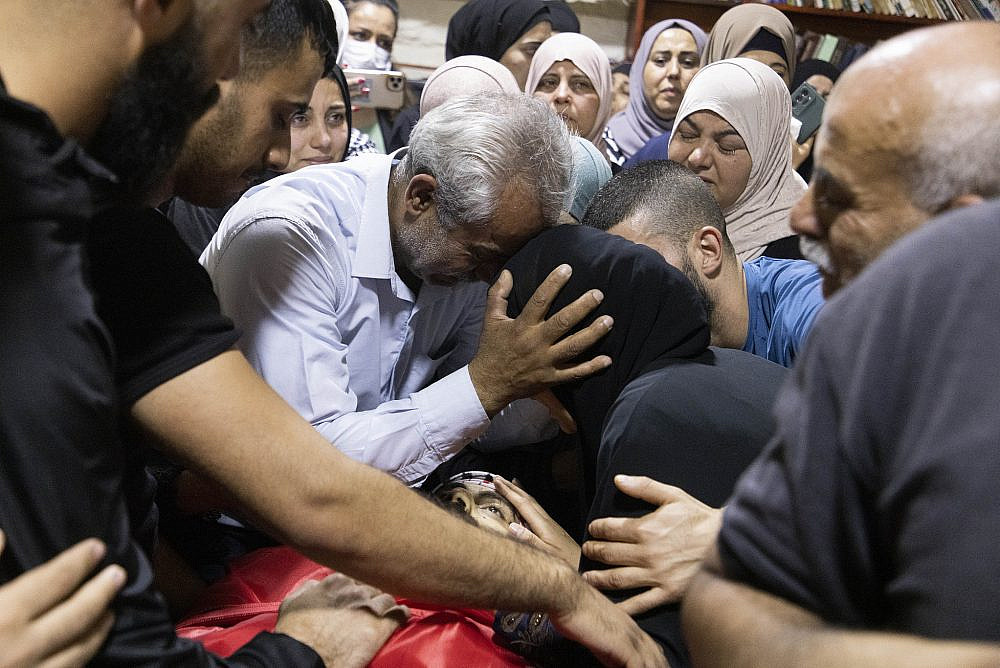 The funeral of Ali Harb, who was stabbed to death by an Israeli settler the previous day, in the village of Iskaka, occupied West Bank, June 22, 2022. (Oren Ziv/Activestills)

On Aug. 25, Israel’s State Prosecutor Office announced its intention to close the investigative file opened following the fatal stabbing of Ali Hassan Harb, a 27-year-old Palestinian man from the village of Iskaka in the north of the occupied West Bank. The closing of the case without an indictment against the offending settler (whose name is prohibited from publication) is further proof of the impunity and protection that Israeli law enforcement provides to Israelis who harm Palestinians, even in cases as serious as murder.

On June 21, 2022, a group of Israeli settlers invaded land that belongs to the villagers of Iskaka with the intention of setting up an illegal outpost. Members of the Harb family and others arrived at the scene to prevent settlers from taking over their olive groves. A verbal confrontation ensued, which Palestinian eyewitnesses say did not involve physical violence on their part. During the incident, a settler stabbed Ali Harb to death.

Hours later, Israeli news site Ynet reported that the police claimed the stabbing may have resulted from an internal conflict among the Palestinians and not a confrontation with the settlers. This false claim, which the police were not ashamed to release even before Harb had been buried, was apparently the first indicator of the conduct to be expected in the investigation.

It later became clear that the Israeli authorities were investing the bulk of their energy in trying to clear the name of the army, in part by refuting the claim of the Palestinian eyewitnesses that the incident took place in front of Israeli soldiers who did nothing to prevent the stabbing or to arrest the culprit after the fact. According to eyewitnesses, Harb did not die immediately, but rather after soldiers prevented his family from reaching his side or rushing him to the hospital.

In the days after the stabbing, Israel’s security forces outdid themselves by invading the homes of members of the Harb family and other eyewitnesses from the village and arresting them. Israeli investigators tried to convince them to retract the claim that soldiers were present at the scene and that the army delayed assistance to the victim. They were soon released without charge. 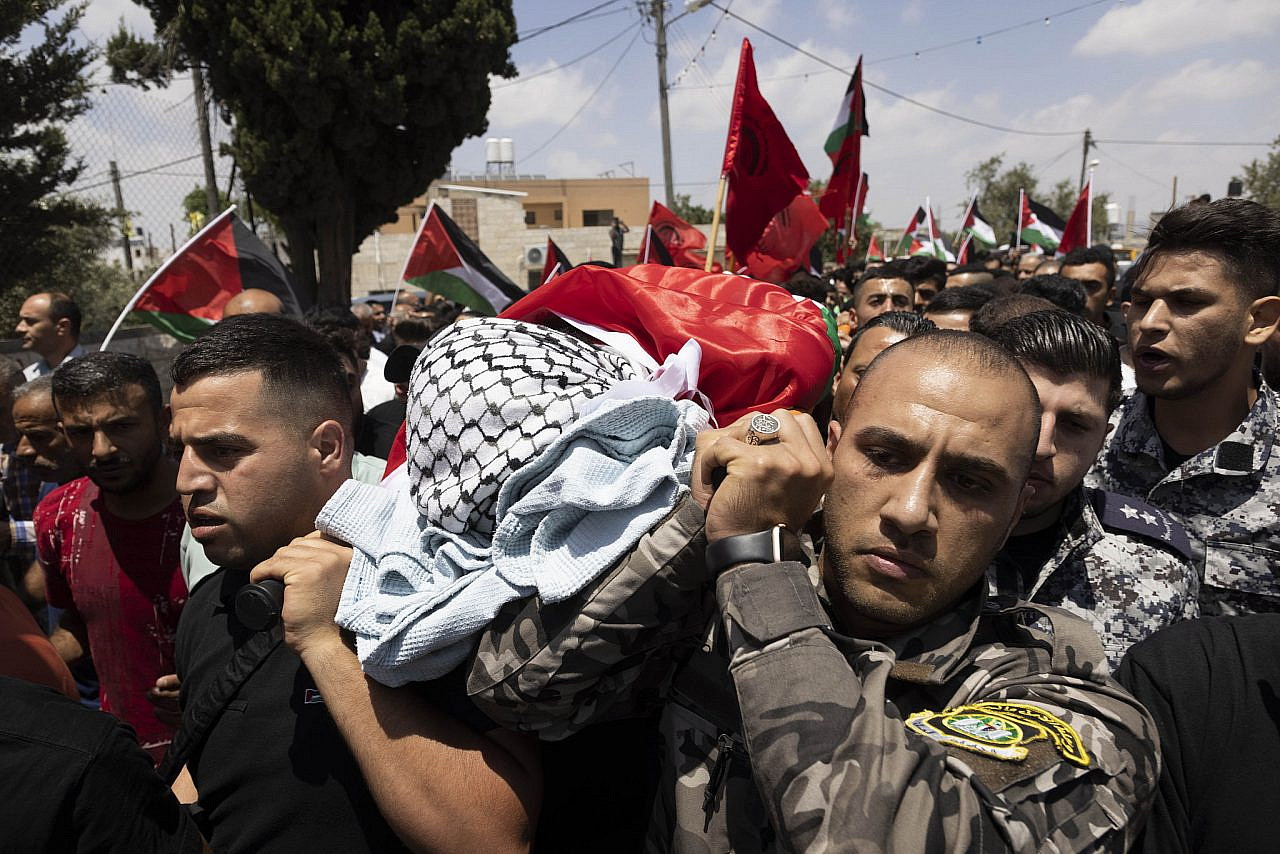 The funeral of Ali Harb, who was stabbed to death by an Israeli settler the previous day, in the village of Iskaka, occupied West Bank, June 22, 2022. (Oren Ziv/Activestills)

Now, two months into the investigation, the Prosecutor’s Office has decided to close the case on grounds of “insufficient evidence,” because, in their words, “it was not possible to rule out [the suspect’s] version that he acted in self-defense.” However, it seems that the killer did not act the way any reasonable person who is left with no choice but to take a life — as a last resort of self-protection — would.

First of all, he did not turn himself in to the police and instead ran from the scene. Even after it was revealed that the police were looking for the offender and found the knife used in the stabbing, he continued with his daily routine. What’s more, in photos taken in the moments before the stabbing, a person who the Palestinian eyewitnesses identify as the culprit is seen with a rubber glove on one of his hands.

The settler was finally arrested on suspicion of murder and obstruction of justice only a day after the incident, when he arrived at the police station to file a counter-complaint against the Palestinians. It is likely that by then he had consulted with a lawyer to formulate a course of action.

A number of testimonies taken by police from others at the scene also contradicted the suspect’s claim that he was in danger. A video from moments before the stabbing shows that shouts and curses were exchanged between the parties, but there was no physical violence. The documentation also shows that there were armed security guards from the Ariel settlement at the scene; this is in addition to the claims by eyewitnesses that Israeli soldiers were present too.

If there had been a real threat to the life of the culprit or others, the security guards would surely have acted to protect the Israeli citizens. The fact that no one was injured in the incident except for Ali Harb sows further doubt concerning the version of events as told by the offender, who claimed that he had to defend himself and others.

Yet despite all this, the Prosecutor’s Office closed the investigation file. 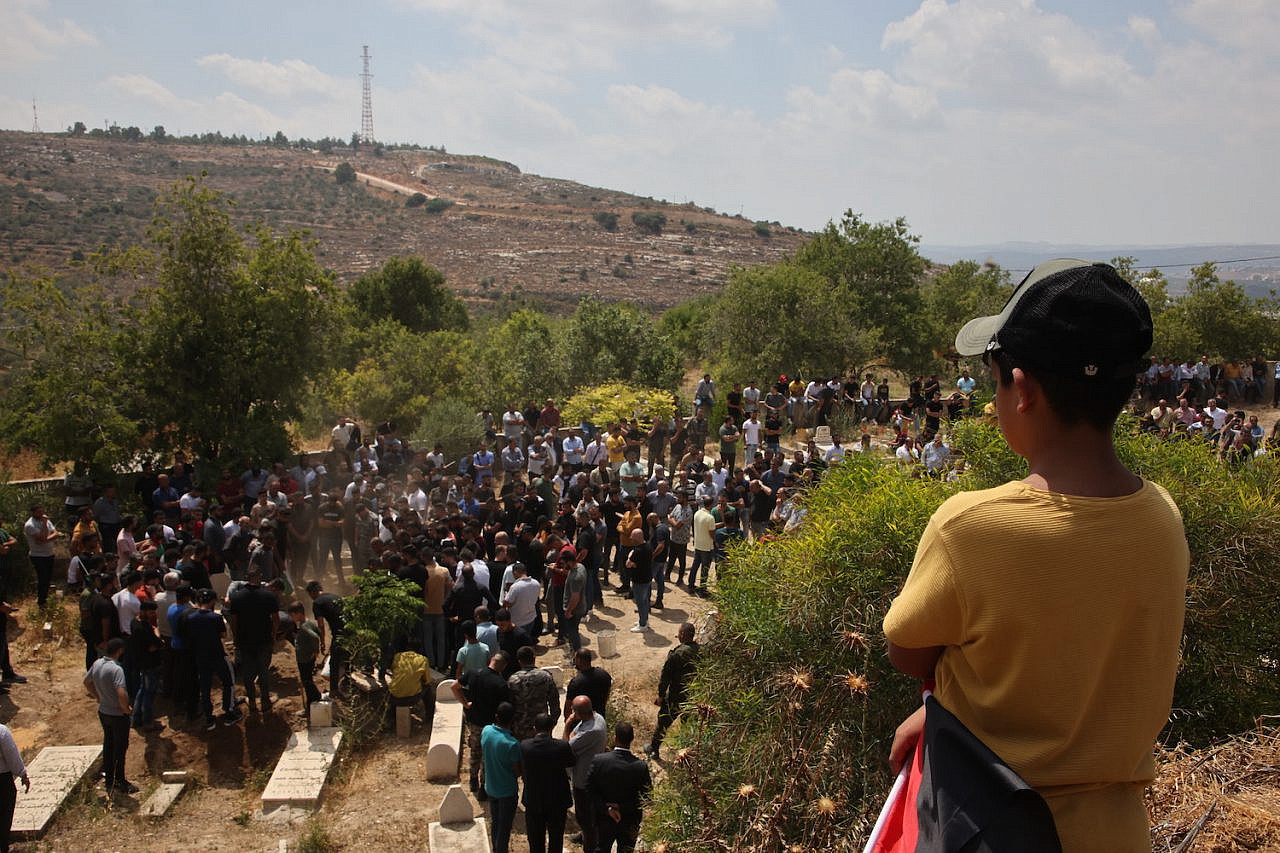 Palestinians take part in the funeral of Ali Hassan Harb, who was stabbed and killed by an Israeli settler, Iskaka, June 22, 2022. (Oren Ziv)

The case closure is, first and foremost, heartbreaking news for Ali Harb’s parents; although their son will never return, they at least had hopes that his killer would pay a heavy price. At the same time, the closing of this case sends a clear message to settlers: whoever harms Palestinians will not be held accountable.

Palestinians know that their blood is cheap in the eyes of Israeli authorities, and the impunity that the system grants to Israelis who harm Palestinians extends far beyond this single case. According to Yesh Din’s data, 92 percent of police files investigated between 2005-2021 in incidents of ideologically motivated crimes committed by Israelis against Palestinians were closed with no indictment filed. Eighty-one percent of these cases were closed in circumstances indicating a failed and negligent investigation.

The offending settler, who entered the Harb family’s lands with the aim of usurping them by erecting an illegal outpost, confronted the family who wanted to drive him and his gang away and killed a young man with the swing of a knife — and now he will continue his life as if nothing happened.

It is clear to everyone that if the situation was reversed — if the stabber had been Palestinian and the victim Israeli — the suspect would have been arrested immediately, if the security guards had not decided to shoot him on the spot. He would have been designated a terrorist, an indictment for murder would have been filed against him, he would have been sentenced to a long prison term, and the army would likely have destroyed his parents’ house.

But alas, the settler who killed Ali Harb belongs to a special group of Israeli civilians in the West Bank that enjoys a variety of privileges, including a license to commit harm and even kill without consequence.

Ziv Stahl is the executive director of Yesh Din.