In Jerusalem’s Batan al-Hawa neighborhood, Palestinians have been facing a series of ‘quiet’ evictions by state-backed settler organizations. 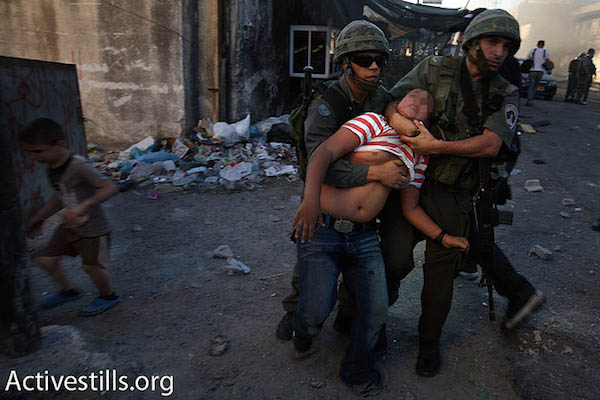 “A police officer named Fares made us stand facing the wall, and kicked our legs hard until we spread them apart. Then he beat us and spoke to us very rudely. He said: ‘Do you want me to fuck you?’ When I said no, he asked: ‘Have you ever been fucked?’ I said no, and he kept asking: ‘Do you want me to fuck you some other time?’ I turned around and said: ‘If you want for yourself.’ He said: ‘I’m going to punch you now so hard it’ll flatten your face.’”

This scene is not an excerpt from a Jean Genet novel, but from a testimony given by 13-year-old M. to B’Tselem field researcher Hussam Abed. While the experience M. described is horrifying, it is not particularly remarkable among the children of his neighborhood, Batan al-Hawa, in East Jerusalem. They have been living in a state of constant friction with Israeli security personnel ever since settlers — accompanied by police and private security guards, generously funded by Israel’s housing minister — began invading the crowded neighborhood.

There is nothing spontaneous about Jewish settlers moving into the heart of a Palestinian neighborhood while dispossessing the local residents. In fact, it is a well-planned undertaking that is broadly supported by Israeli state authorities. In this case, the organization behind the home ownership claims is Ateret Cohanim, whose actions were facilitated by a racist combination of three laws, which make it possible to claim ownership over property that had belonged to Jews before 1948. The courts have given their stamp of approval to these injurious actions.

In 2015 three Palestinian families were evicted from their homes in Batan al-Hawa to make way for settlers. Since then, about 80 other families in the neighborhood have been living under the shadow of the same threat. They and the children of Batan al-Hawa live in an atmosphere of constant tension as a result of daily contact with the settlers and their security personnel. Even though Israel’s juvenile justice system stipulates that the arrest of a minor should be a last resort, testimonies collected by B’Tselem indicate the unbearable ease with which children are arrested in the neighborhood.

In response, neighborhood residents opened a local branch of the Madaa Creative Center about three months ago. The idea is simple: the streets have become too dangerous for the children of the neighborhood, so they must be kept off them as much as possible. The center, which operates five days a week from morning to evening, includes a small courtyard, a computer lab with internet access and games, and spaces for arts and crafts classes. Although Internet access was cut off for several weeks after security guards fired live ammunition in the middle of the neighborhood, damaging infrastructure, service has since been restored.

Yet the fundamental problem in Batan al-Hawa – namely, Israel’s attitude toward the Palestinians living under its rule – will take much longer to fix. The process of expulsion in the neighborhood – the largest in Jerusalem in years – is one of many eviction proceedings quietly initiated by the state in East Jerusalem and throughout the West Bank.

Israel’s governments have constructed a dangerous illusion that the occupation is a temporary matter, and all that needs to be done is to wait for it to be over. But while on one side of the Green Line the illusion of the occupation as “temporary” persists, whereas in fact it is getting stronger and more entrenched, another generation of Palestinian children is growing up in reality. And in the real world, there is violence – not only by police officers or by the settlers and their security guards, but by all the mechanisms of the government in concert: the legislature, the judiciary, the planning, budgeting and security systems – that is directed against them.

Amit Gilutz is spokesperson for B’Tselem – The Israeli Information Center for Human Rights in the Occupied Territories. This article was first published in Hebrew on Local Call. Read it here.