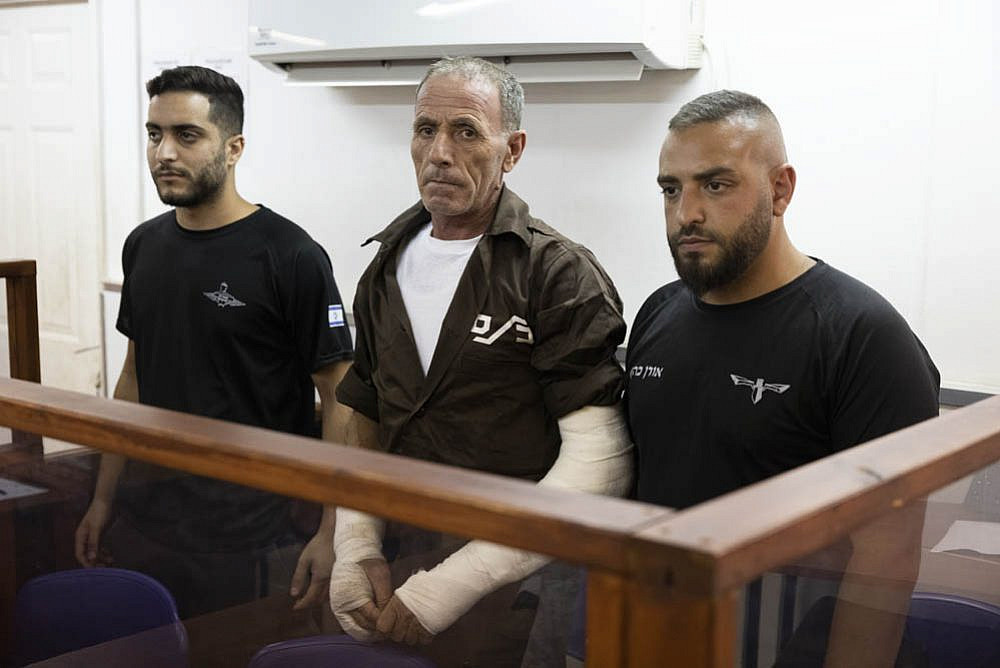 The Israeli police on Monday reduced the charges against a Palestinian farmer, Hafez Hureini, who had been accused of attempted murder after defending himself against a settler attack while working on his land last week. Hureini, from the village of A-Tuwani in the occupied South Hebron Hills, is now accused of grievous bodily harm following a hearing at Ofer Military Court.

Hureini was arrested and has been held in detention since last Monday amid false claims by settlers, which were amplified by the Israeli mainstream media, of a “lynching” by dozens of Palestinians against a settler named Itamar Cohen. But an investigation by +972 and Local Call showed that Cohen was one of a group of settlers, armed with a rifle and metal pipes, that had invaded private Palestinian land and attacked a small group of Palestinian farmers, including Hureini.  During the altercation, in which Hureini was acting in self-defense, Cohen was struck and sustained fractures to his skull while Hureini had both his arms broken. Following the investigation, the police reduced Hureini’s charges.

The court extended Hureini’s detention by three days, while the judge criticized the police for the lack of progress in the investigation and did not respond to their request to extend Hureini’s detention for another nine days due to the upcoming Jewish holidays. The judge also refused the request of attorney Riham Nasra, who represented Hureini, to release him from custody. “A 52-year-old man with two broken arms does not constitute a danger,” Nasra claimed.

Hureini arrived at the hearing with both of his arms bandaged, and looking tired. Present in the hall were two of his family members, along with MK Ofer Cassif from the left-wing Hadash party and European diplomats. Outside the court, dozens of Israeli left-wing activists demonstrated calling for his release, which could be heard clearly inside the hearing. 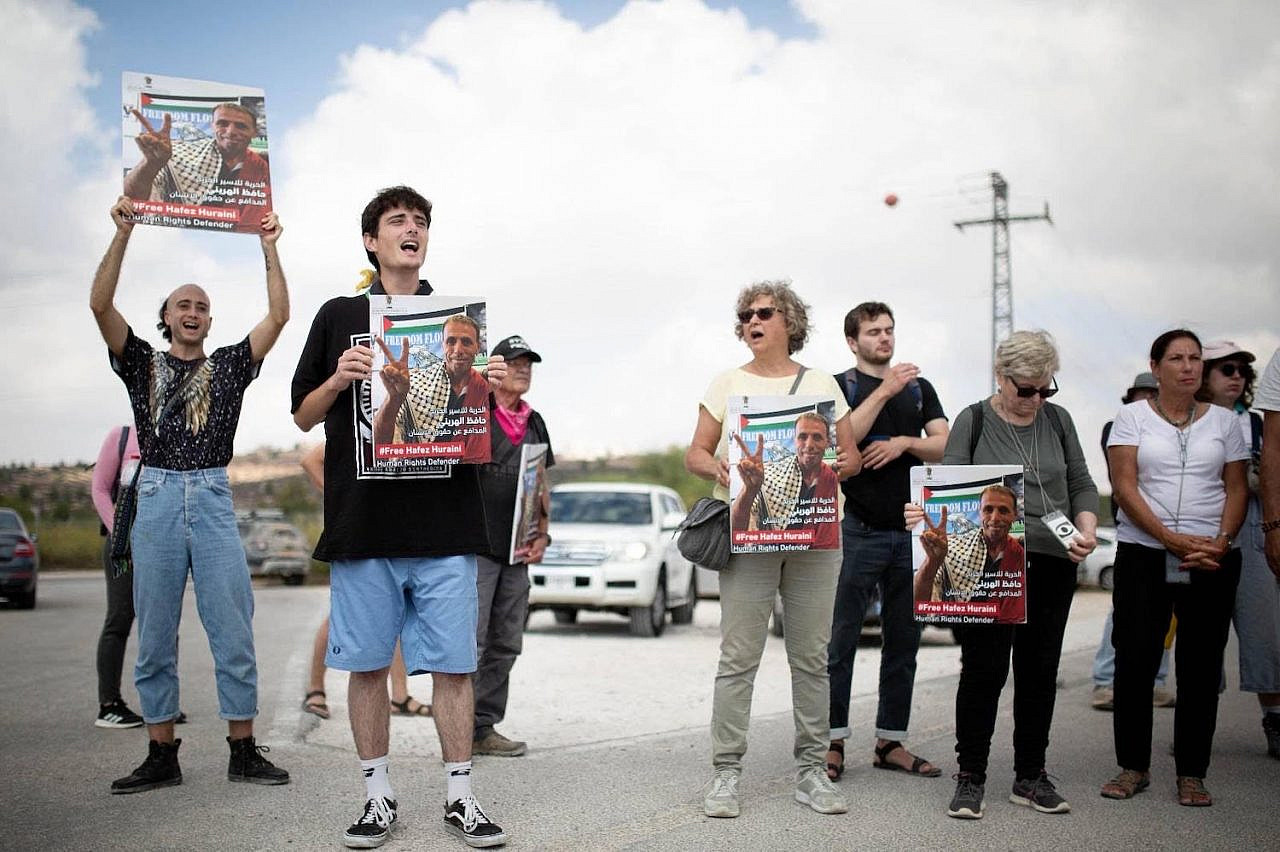 The police prosecutor confirmed during the hearing that the incident took place on “land registered in the name of Palestinians,” and that the settlers arrived holding “sticks.” He added that the police had made attempts to locate the settlers who participated in the attack, but had so far been unsuccessful. As for the settler who was injured in the incident, it was noted that his testimony was only collected at the hospital and, according to the prosecutor, he will likely be questioned in the coming days.

Despite the fact that the entire event was documented in an uninterrupted video filmed by somebody present at the scene, the prosecutor insisted that it was a “complex case.” He said that a confidential report was submitted to the court, and refused to answer many of the questions presented by Hureini’s lawyer. The prosecutor also confirmed that three investigative actions, about which he provided no further details, have not yet been carried out; during the previous hearing, which took place on Thursday, the police claimed that releasing Hureini from detention might disrupt those efforts.

Nasra once again presented the video documenting the incident in court and said that while there was “no disputing the fact that one of the settler attackers was injured,” the footage also made clear that Cohen was “attacked or pushed back only after he attacked Hureini and broke his arms, on his private land.” Hureini, Nasra continued, acted “out of an immediate and tangible sense of danger” — permissible, she said, under the Dromi Law, which provides for the possibility of self-defense in the event of an invasion of private property.

“The question is not whether the detainee pushed back [the settler] or not, but in what context he did it. There was an objective danger here,” Nasra continued. In the previous court hearing, the judge did not rule out the possibility that Hureini had acted in self-defense. Nasra added that while Hureini is detained, his Israeli attackers are free and have yet to be questioned under caution. 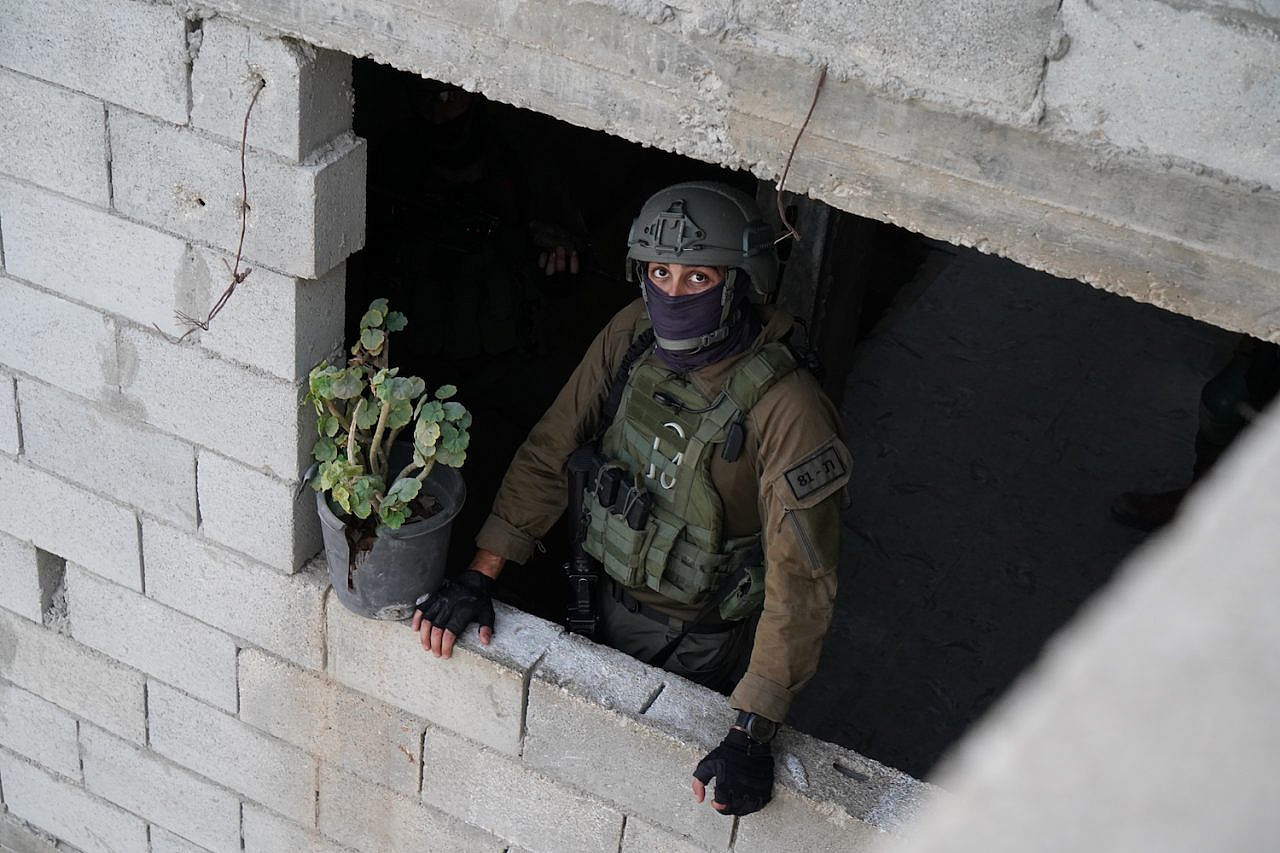 An Israeli soldier seen during a raid on the village of A-Tuwani in the South Hebron Hills, September 15, 2022. (Omri Eran-Vardi)

Since the incident, the army has stepped up its crackdown on A-Tuwani. For three days in a row, soldiers raided the village during the evening and at night, throwing stun grenades into homes and detaining residents. Last Friday, the army raided the home of +972 writer Basil Adra.

Earlier that day, settlers protested the incident at the entrance to Havat Ma’on; meanwhile, soldiers prevented Palestinian residents and left-wing activists from approaching the agricultural land.

On Saturday, Palestinian and Israeli activists held a small protest on the land beside A-Tuwani demanding Hureini’s release. The army dispersed the protest and arrested six demonstrators, who were later released. Since last week’s protest, the army has intermittently ceased accompanying Palestinian schoolchildren from the hamlet of Tuba to their school in A-Tuwani, which is supposed to protect them from attacks by the settlers of Havat Ma’on.

On Sunday, right-wing politician Amichai Chikli visited the area and repeated the false claims — despite the fact that they had already been refuted — that the confrontation was in fact an “ambush” and “lynching” of Jews. By Monday morning, in Ofer Military Court, even the police had changed their tune and no longer repeated the fake news. Meanwhile, Hureini’s attackers are yet to come under formal investigation.