The young settler charged with attacking Rabbi Arik Ascherman blames human rights advocates for causing tension in the West Bank: ‘If I kill one of them it’ll be over. But that isn’t legal.’

The Jewish extremist accused of attacking Rabbis for Human Rights president Arik Ascherman last month was charged in court two weeks ago with causing grievous bodily harm and possession of a knife and ammunition. The youth, 17 years old, is suspected of assaulting Ascherman near the settlement of Itamar as the rabbi was assisting Palestinians with their olive harvest.

Israel’s Channel 10 news conducted an interview with the suspect, himself from Itamar, after he was released to house arrest last Friday. His back turned to the camera to protect his identity, he accused human rights activists of being the source of tension in his area, saying there needs to be “deterrence.”

“If I kill one of them it’ll be over. But that isn’t legal,” he said. “We need to deter them. They need to be made fearful. They need to receive a blow.”

Even the Channel 10 report, which does not appear to have sought a comment from Rabbi Ascherman, notes that given the severity of the charges against the youth, it is surprising that he was released to house arrest. The youth’s comments in the interview do little to assuage concerns over his release.

So why was he allowed to proceed under house arrest? According to Channel 10, one of the reasons is the fact that he knew members of the Fogel family, Itamar residents who were murdered in their home by Palestinians four years ago.

The massacre of the Fogel family was likely a terrible experience for the suspect, yet it seems like a bizarre — and frankly irrelevant — reason for him to have been released to house arrest when he is being charged with assault and possession of illegal weapons.

Yet this decision has its own internal logic, granted by the fact that the youth’s lawyer is Honenu member and far-right-wing activist Itamar Ben-Gvir. Appealing to emotion and seeking diminished responsibility are trademark Ben-Gvir and Honenu tactics that are wheeled out time and again when they defend Jewish extremists who are charged with assault, vandalism, and even murder.

Ben-Gvir was also interviewed by Channel 10, portraying Rabbi Ascherman as an agitator and instigator who encourages Palestinians to take part in violent rioting, which is filmed and then doctored. He also slammed Israeli police for allowing Ascherman to act “with impunity.”

There was no follow-up question to Ben-Gvir about the impunity for settlers that allows them to shoot, throw stones at and even burn alive Palestinians without any charges being filed against them. 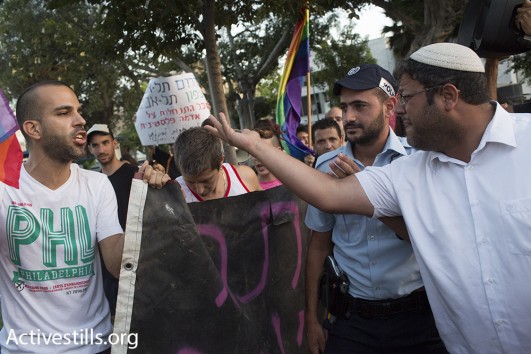 Ben-Gvir also a directly linked the activities of human rights organizations and murders such as those of the Fogel family: “We need to remember…that the killings which took place in Itamar started with working the land during the day and ended with a massacre at night.” The suspect also sang a similar tune, saying that it is human rights activists and not Palestinians who are the problem.

Railing against left-wing Jews as being the true threat to Israel is one of the key calling-cards left behind by Rabbi Meir Kahane, a virulently anti-Arab activist and member of Knesset (his Kach party was banned in the late 1980s for inciting racism and violence).

In a 1984 newspaper article, Kahane wrote: “It takes great strength to love Jews so much…that one fights Jews who would destroy them…we are in need of the strong Jews. Those strong enough to love and hate and wise enough to know when to do what.”

Ben-Gvir, himself a Kahanist, was a youth activist with Kach before it was outlawed. Attacks such as the one against Rabbi Ascherman, and Ben-Gvir’s defense of them, are the ongoing manifestation of Kahane’s original call to arms. And as we have seen before, incitement against the Left does not always end with just a few bruises.