Yesh Din personnel, who were in the West Bank doing the job that police simply aren’t doing, were attacked last week by settlers near Havat Gilad. And these are the people the defense minister wants to sign a deal with? 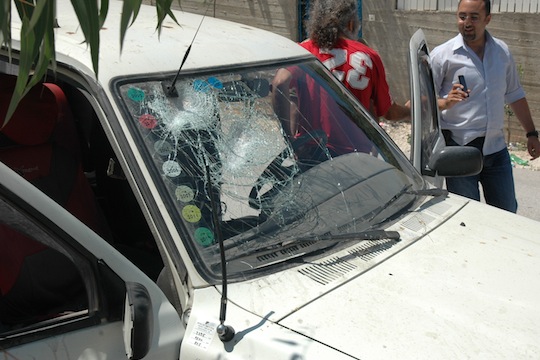 A car belonging to one of the Yesh Din personnel after it was attacked by settlers at Havat Gilad (photo: Yesh Din)

Three Israelis – and yes, there is the necessary proof that they were Israelis – attacked a Yesh Din team near the illegal outpost of Havat Gilad on Tuesday, June 25. The assault came a day before the High Court of Justice was to hold a hearing about the evacuation of several illegal structures there. All this took place in the wake of a suggestion of Defense Minister Moshe Ya’alon to legalize Havat Gilad in return for removing those structures.

Ironically, the attack was not divorced from the legal procedures: the Yesh Din team was there to document the illegal construction in Havat Gilad. After viewing the place and driving away, the team found its way blocked by three Israelis who arrived on the scene on two motorcycles. The Israelis, one of whom was armed, violently attacked the team’s vehicle, broke its windshield and stole its keys. Despite the attack, our team made it back safely to the village of Far’atha, and lodged an official complaint with the police.

So as not to give the police an excuse to destroy this investigation as well, we shall not provide more details about the incident. But some things must be said clearly, even though they have been said so often that they seem banal: the government of Israel is responsible for this violence.

The settlers of the Havat Gilad outpost have lived on a declared illegal outpost for over a decade. The outpost was mostly built on lands declared to be private by the Civil Administration, cultivated Palestinian lands. Most of the structures on it have been issued demolition orders that are rarely enforced.

This is the first stage: turning a blind eye and quietly cooperating – the various arms of the Israeli government provide the outposts with services – with the theft of Palestinian lands. Next comes the second stage: using quiet and daily terror against Palestinians who insist on holding to their land. Often, when the government stages a show of evacuating an outpost, comes the third stage, that of violence against soldiers and cops. If you lie down with dogs, don’t be surprised when you wake up with fleas.

And finally the fourth stage: violence against Israeli civilians who do the job the government and the police prefer to abandon. Again, since Havat Gilad is an illegal outpost, it is the duty of the government to evacuate it and monitor the illegal construction in it. As it shirks this duty, we fulfill it instead.

The ever-present thread in the history of the settlements is outlawry and violence. The ever-present thread of the behavior of the government is turning a blind eye. This is rather easy when it comes to Palestinians; as far as some of the current government ministers are concerned, after all, the Palestinians are a piece of shrapnel in the behind, and over the years, the government has even learned to accept attacks on Israelis. Prime Minister Yitzhak Shamir once said that “for Eretz Israel, it is permitted to lie.” Now we learn it is also permitted to attack the elderly for it. And not just Palestinians.

These are the people Defense Minister Ya’alon wants to have a repugnant deal with, according to which the structures built in Area A will be removed, and the government will pronounce kosher the rest of the treif in return. When he does so, he will quietly affirm the violence which has followed the outposts since their creation – the violence without which they would not exist.

And so it goes.