23 Israelis and Palestinians injured – some including broken bones and bloody gashes – in an attack by settlers from the settlement of Anatot just outside Jerusalem, West Bank 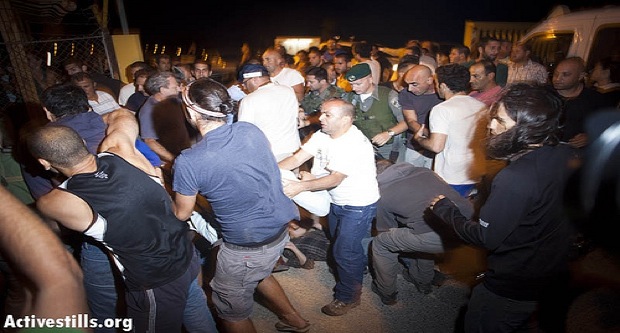 According to Israeli activists, on Friday morning (Sept 30) Palestinian and Israeli activists were attacked by settlers near the settlement of Anatot, which is about 20 minutes drive outside of Jerusalem in the West Bank, just north of Maale Adumim. Activists came to accompany the owner of the plot of land to plant trees – when they were met by a large group of settlers, who attacked them and reportedly cracked open the head of the landowner and attacked his wife. The two have been hospitalized.

The only Israeli news outlet I’ve seen report on this is Ynetnews, which is reporting that 3 have been “lightly” injured in clashes between protestors and settlers, who “hurled stones at each other.”

According to the Ta’ayush activist I spoke to who prefers to remain nameless, the landowner, Abu Salah al Rifai and his wife Ayman, hold the ownership papers for their land, on which the settlement of Anatot was built in the 1980’s. Their case is a bit different from most Palestinians in the West Bank since Ayman has Israeli citizenship and therefore is actually allowed to enter the settlement and reach the land. The couple approached Ta’ayush activists several weeks ago and asked for help to prevent their land and property from being damaged by settlers.

Here is the Ta’ayush activists’ account of what happened Friday, in his own words:

When we arrived Friday morning there was already a security officer there, who decided to call the police, but they did not interfere. However, more and more settlers from the area gathered on the main road a few hundred feet from where we were. I called the police and told them we felt in danger. There were some police cars on the road where the settlers were but they did not prevent the settlers from coming up to confront us. Some came up to us and started cursing and threatening. I called the police again. Then dozens came towards us and began attacking us. It really felt like a lynch. I was punched several times and fell to the ground and when I got up I rushed over to a  border police officer and begged him to protect me and help me. I latched on to him for dear life but he didn’t stop them.  My camera was taken from me and broken and my glasses had broken somwhere. I began running to the street with another activist and managed to get away from the settlement while many others were still being attacked.  I managed to get out with only a broken hand and some bruises.

Activists claim the police officers who were present at the scene did nothing while they saw the activists being beaten and their cameras smashed. Three other activists have been hospitalized  and an additional three have been arrested by the police, who have not arrested any of the settlers, in spite of having witnessed everything.

Later in the day, more activists arrived to protest against the violence that took place earlier. They too were attacked and beaten and had stones thrown at them. In spite of police presence at the scene, the police did nothing.

Nineteen people were injured in the second attack, requiring medical attention, and three have been hospitalized. A total of 23 injuries were reported from this incident, and according to the twitter feed of a female activist who was there, settlers tried to rip her clothes off. There was also damage done to cars belonging to the activists, which were parked outside the settlement – smashed windshields, head and tail lights, and punctured tires. 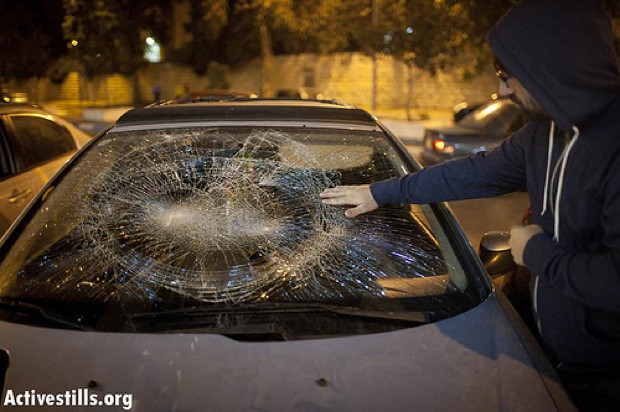 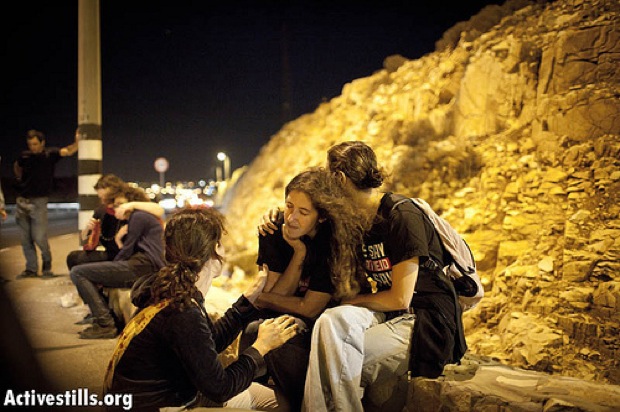 Activists consoling each other after attack (Photo: Activestills)