Settler violence over the weekend in West Bank: 100 trees cut down. Car burned. Two additional cars damaged. Two Palestinians attacked. The Israeli army’s answer: to arrest the very Palestinians who were beaten just moments before. This report was compiled, in Hebrew, by Uri Yacobi Keller for the Alternative Information Center and was translated and edited by Mya Guarnieri. 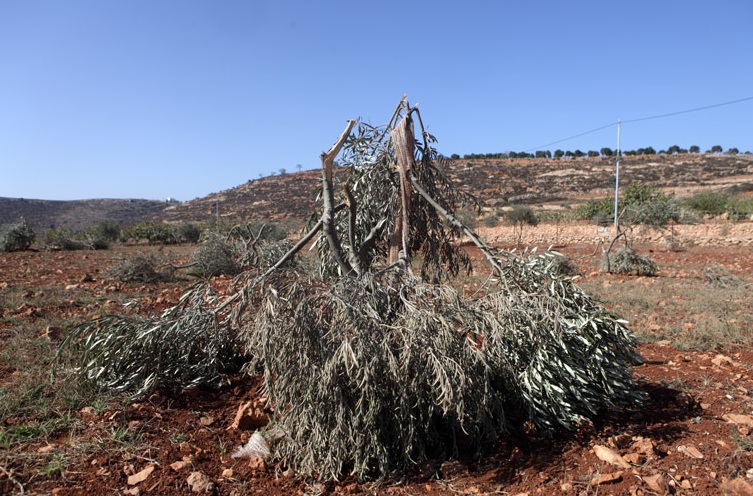 According to Palestinian news agencies Maan and WAFA, settlers from the Tapuah settlement attacked Palestinian land in the area south of Salfit in the central West Bank yesterday (Saturday). The settlers cut down no less than 100 olive trees of the Palestinian villages Yasouf and Jamain.

Maan also reported that the settlers attacked and caused extensive damage to cars belonging to two Palestinians on the road that is adjacent to the Huwwara checkpoint.

In Hebron, settlers attacked the home of a Palestinian woman, throwing stones at her house and setting her car on fire, according to Maan. The resident of the house, Hana Abu Heikal, lives next to the illegal Hebron settlement Adamot Yishai. Because the main road used to access her house has been blocked by the Israeli army, Abu Heikal and other Palestinian residents are forced to climb a wall and to use a dirth path to reach their houses.

The day before, on Friday, two young Palestinian men were attacked by settlers as they went down Shuhada Street, also in Hebron.

Maan reported that settlers beat the men until soldiers in the area intervened. The soldiers put handcuffs on the Palestinians and took them to an unknown detention facility. The soldiers did not take any action against the settlers.

Last year saw a marked and worrisome rise in settler violence. According to reports from various human rights organizations, 2011 saw a 50 percent rise in such incident from 2010, and a more than 150 percent rise from 2009.

In light of this weekend’s events, it doesn’t seem that the year 2012 will be any different.