West Bank settlers attacked a six-year-old Palestinian girl with rocks in the South Hebron Hills on Saturday, wounding her in the head, according to Israeli human rights NGO B’Tselem. 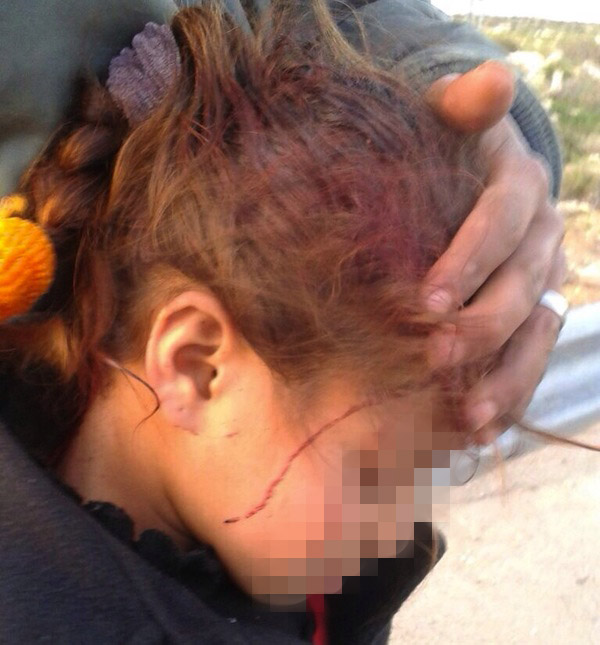 Six-year-old Palestinian girl bleeds from her head after being attacked by masked settlers from Havat Maon. (photo: B’Tselem/Nasser Nawaj’a)

The girl was wounded after a group of masked settlers threw rocks at her near the entrance to the illegal outpost of Havat Maon, said B’Tselem. She was also lightly injured in her leg as she attempted to flee. B’Tselem reported that Israeli police took the girl and her father to a local station to file a complaint, and that she was treated at a local clinic for her wounds. The police are currently searching for suspects.

Attacks by settlers on Palestinian civilians are a nearly everyday occurrence across the occupied West Bank. While Palestinians themselves are often the target of settler violence, Palestinian homes, property and sources of income are also constantly at risk. Just between March 10-15, OCHA recorded seven attacks by Israeli settlers on Palestinians or their property. This included physical assault and injury of two men in Hebron and East Jerusalem; the uprooting of 72 olive trees in At Tuwani and Al Khader; and vandalism to four vehicles and several water tanks.

According to human rights group Yesh Din, between 2005-2013 just 8.5 percent of investigations against Israeli settlers suspected of harming Palestinians and their property ended in indictment. In the vast majority of cases, the investigators simply failed to locate the offenders or to collect sufficient evidence for prosecution. If recent history is any guide, the likelihood that the settlers who attacked the girl will be located is extremely low.

And while the police and army are considered the two bodies entrusted with protecting the Palestinian civilian population, they often protect the settlers or turn the other cheek in the face of their violence.

The settlers of Havat Maon — an outpost on the edge of the already-established settlement of Maon — are notorious for their violence against the surrounding villages of At Tuwani and Tuba. I visited the area along with activists from Ta’ayush on a solidarity trip in early 2011; we planned to re-plant hundreds of trees that had been felled just a few days earlier, most likely by the settlers of Havat Maon.

When we arrived, accompanied by IDF soldiers, the settlers immediately made their way toward where we were working. Confrontations began as they started yelling “whore!” at an elderly woman who was trying to pick weeds, and continued when they attempted to attack some of the locals who were with us. At some point, an older settler came up and told me that he couldn’t wait for the day that I would be hung in the middle of Tel Aviv’s Rabin Square. A few minutes later group of hooded teens began kicking sheep that belonged to a Palestinian shepherd. The soldiers just stood there and did little more than try and separate the two groups.

After what seemed like hours of verbal abuse, the soldiers declared the area a closed military zone, and forced the Palestinians back into their village. The order did not apply to the settlers, who continued walking around the fields of the village, taunting the Palestinians and the activists from afar. The Palestinians refused to go back, and eventually began clashing with some of the soldiers, one of them even throwing a rock at settlers. A group of three or four soldiers pounced on the him, arrested him and threw him in the back of a jeep. The settlers, some 40 feet away, were dancing and laughing hysterically.

Then we went home.