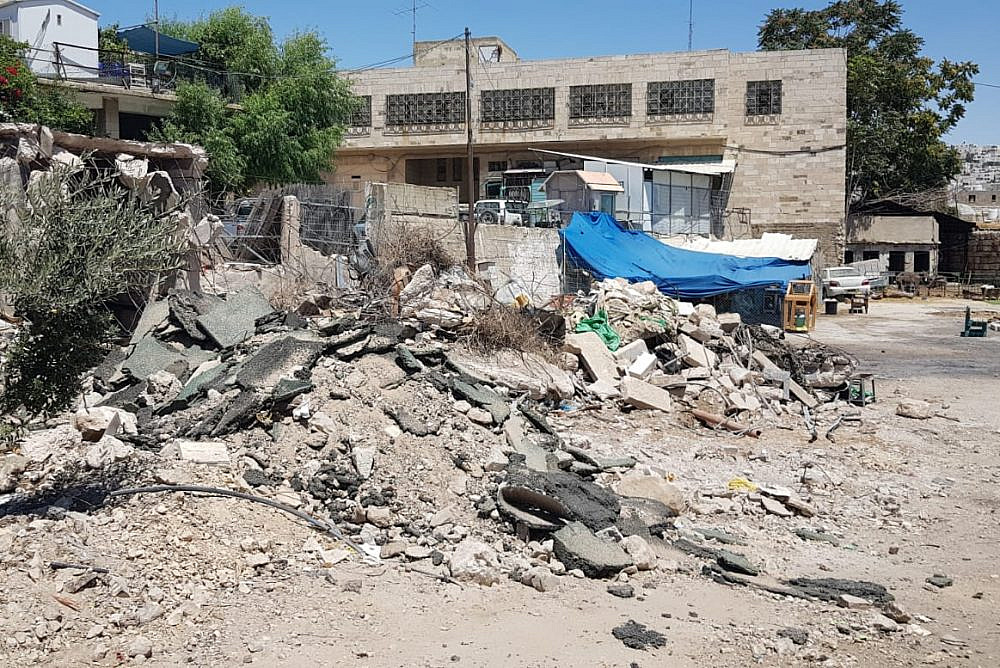 The ruins of Palestinian stores after they were bulldozed by Israeli settlers, Old City of Hebron, occupied West Bank, July 22, 2022. (Courtesy of Breaking the Silence)

Tareq al-Kiyal once had a shop in the Old City of Hebron. For more than 20 years, he has been prevented from accessing it after the army ordered its closure and forbade Palestinians from entering the area. Now it lies in ruins, after an Israeli settler destroyed the store with a bulldozer last month.

Al-Kiyal’s store wasn’t the only one; on July 6, settlers destroyed four Palestinian shops that the Israeli army had first closed in the aftermath of the Ibrahimi Mosque massacre in 1994, when an Israeli settler shot dead 29 Muslim worshippers. Seven years later, at the peak of the Second Intifada, the army issued a formal closure order. According to local Palestinian residents, two more shops were also partially destroyed by the settlers.

The shops stood in the area known as the Kiyal Market (also known as the “Camel market”), a few meters from the Avraham Avinu settlement compound, in the heart of Hebron. In the past, the Palestinian store-owners sold pastries, flour, and cheeses there. “It was the main source of income for my extended family,” said al-Kiyal. “We have about 20 stores and warehouses in this area.”

An official in the Civil Administration — the branch of the Israeli army in charge of the day-to-day life of Palestinians in the occupied West Bank — described the settlers’ actions as “cleaning works,” which he says were carried out “without authorization and without prior coordination.” The Civil Administration’s spokesperson stated that, after the intervention of the army, “the works were immediately stopped, without any damage to property.”

But documentation by Palestinians from the day of the demolitions shows the bulldozer in action, and a visit to the site two weeks ago revealed that considerable damage had been done to the buildings. “Nothing moves in the Old City — and certainly no bulldozers come in and destroy buildings — without a green light from the army,” said al-Kiyal.

Since the Second Intifada, about 2,500 Palestinian shops have been closed in the area known as H2 — the part of central Hebron under Israeli civil and military control which is home to around 35,000 Palestinians. Some shops were closed due to military orders, while others were abandoned by their owners due to the severe restrictions imposed by the army on the movement of Palestinians in the area.

What used to be the commercial center of the southern West Bank has become a ghost town, which includes several streets that Palestinians are almost totally forbidden from using. About 800 Jewish settlers live in the area under the full protection of a similar number of soldiers, benefitting from Israeli civil law while their Palestinian neighbors live under military rule.

“In the past, there was a bustling commercial market there,” recalled al-Kiyal. “In 2001, my family’s shops were closed by a military order. In the years since, settlers tried to dislodge the doors and turn the place into a parking lot for their cars. Now they have simply destroyed our shops.” The family members filed a complaint with the police, who stated that “upon receipt of the complaint, an investigation was opened, which is in its early stages, and within the framework of which all the necessary actions will be carried out in order to reach the truth.” 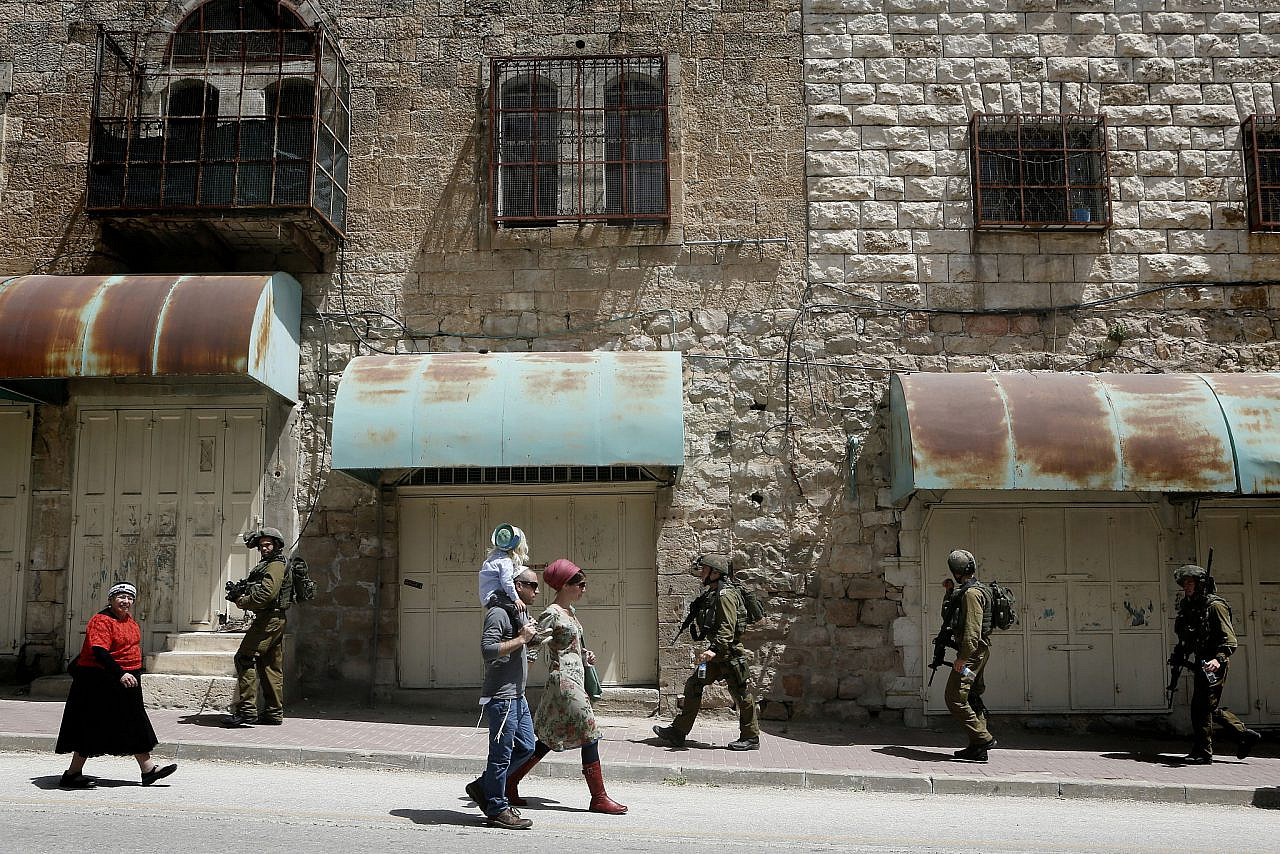 Israeli soldiers patrolling on Shuhada Street in the West bank city of Hebron, as hundreds of Orthodox Jews arrive to pray at the Cave of the Patriarch, during the Jewish holiday of Passover. April 16, 2014. (Miriam Alster/Flash90)

‘The goal is to cleanse Palestinians from the area’

The damage to the shuttered Palestinian buildings is not a new phenomenon. Hagit Ofran, director of Peace Now’s Settlement Watch program which monitors and campaigns against Israeli construction in the occupied West Bank, described what it looks like to walk between these shops on streets reserved for Jews only: “There are shops where I peek inside and see a restaurant with a calendar on the wall where the year is still 2001. The chairs are raised, as they would be before cleaning the floors at the end of the day. There are still customer’s receipts on the table.

“An elderly Palestinian, who had a store where he sold oil, told me that he is still unable to enter it in order to empty it of his equipment,” Ofran continued. “He still has expensive devices in there to this day.”

Settlers began breaking into these stores after their closure following the Ibrahimi Mosque massacre, and especially during the Second Intifada. “They broke holes into the walls and went store by store, through the walls, looting,” explained Ofran. “To this day, from time to time, they break into another store and take what is left in it. 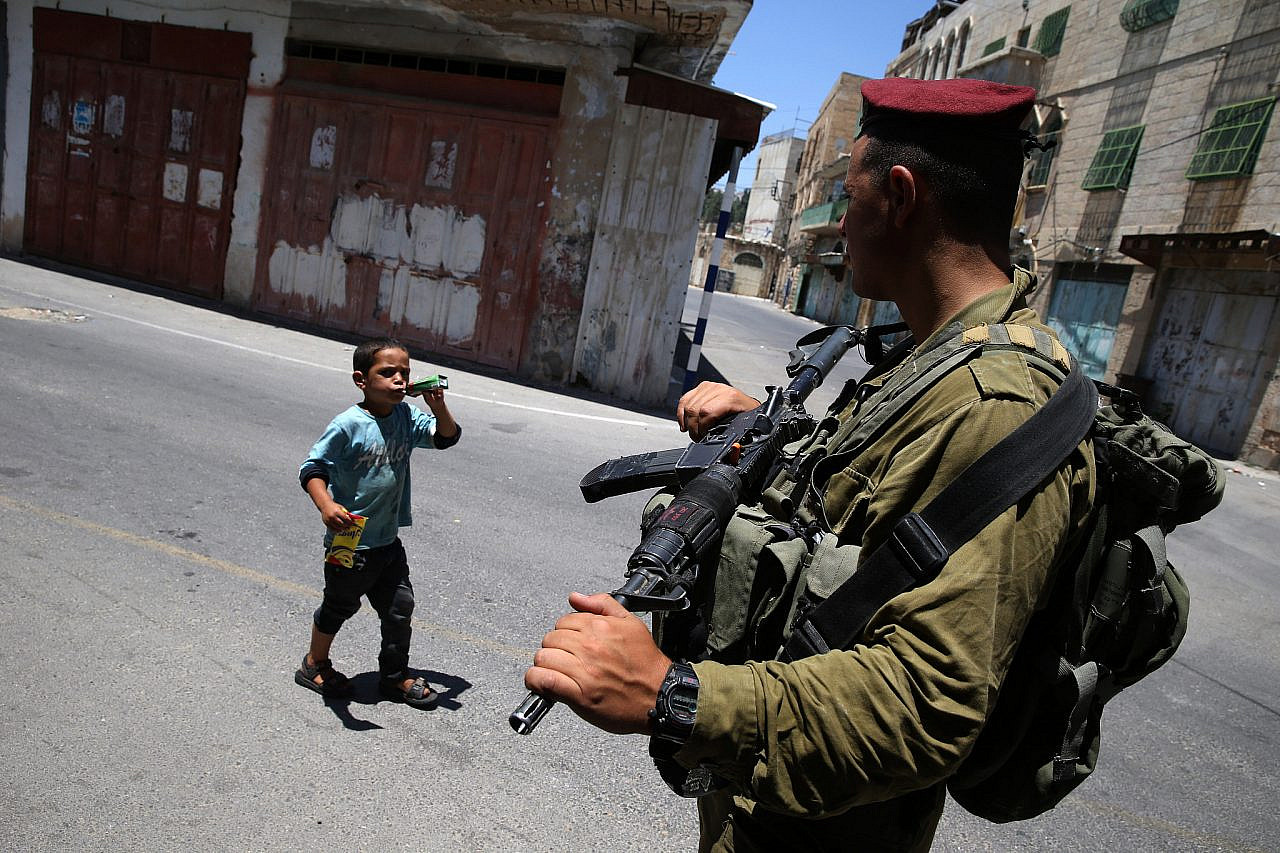 Tawfiq Jahshan is the director of the legal department of the Committee for the Construction of Hebron, a Palestinian organization that works to economically develop the Old City and document human rights violations in the area. He told +972 that the Palestinians at the scene called the police while the settlers were destroying the buildings. “We were told on the phone that the settlers are operating there independently, without any connection to the army, and that they will come to arrest them. And indeed, after that, the demolitions stopped, and we filed a complaint with the police.”

According to Jahshan, the army issued 512 supposedly temporary closure orders for Palestinian-owned shops in the area during the Second Intifada. In most cases, however, the owners of the shops live nearby and are still waiting to reopen them.

“The closure orders were issued under the pretext of security, but what happened shows that the real goal is to cleanse Palestinians from the area, and transfer the land into the hands of settlers,” said Jahshan. “The stores that were destroyed are located 30-40 meters from the Avraham Avinu settlement. They destroyed them so that it will be possible to expand [the settlement] further.”

‘They turned this place into an apartheid museum’

According to a presentation prepared by the Civil Administration in 2001 on the subject of “Legal Violations — Jews” in the city of Hebron, settlers act in accordance with a “systematic and planned” method to break into Palestinian buildings and shops that were closed by military orders. In a slide titled “The Method,” three stages are described: settler leaders “identify a target” — a Palestinian-owned building or store; settler youths break in, looting or setting fire to the equipment inside; and finally, they enter the “target” through a hole broken into the internal wall, through a yard, or through a narrow passage, with the aim of settling in it. The presentation contains a long list of Palestinian-owned stores which settlers burned or looted in this way.

In the last slide, the Civil Administration expresses concern about damage to Israel’s image as a result of these actions. “Jewish activities in Hebron, as described, are portrayed, even if incorrectly, as if they were done under the cover of the Israeli government,” the presentation reads. “The State of Israel looks very bad vis-à-vis the rule of law in Hebron.”

Imad Abu Shamsiyah, whose home is in the Old City of Hebron, documented in 2016 the execution of a disarmed Palestinian attacker by Israeli soldier Elor Azaria. Since then, Abu Shamsiyah has been the victim of continuous harassment by both settlers and Israeli security forces. 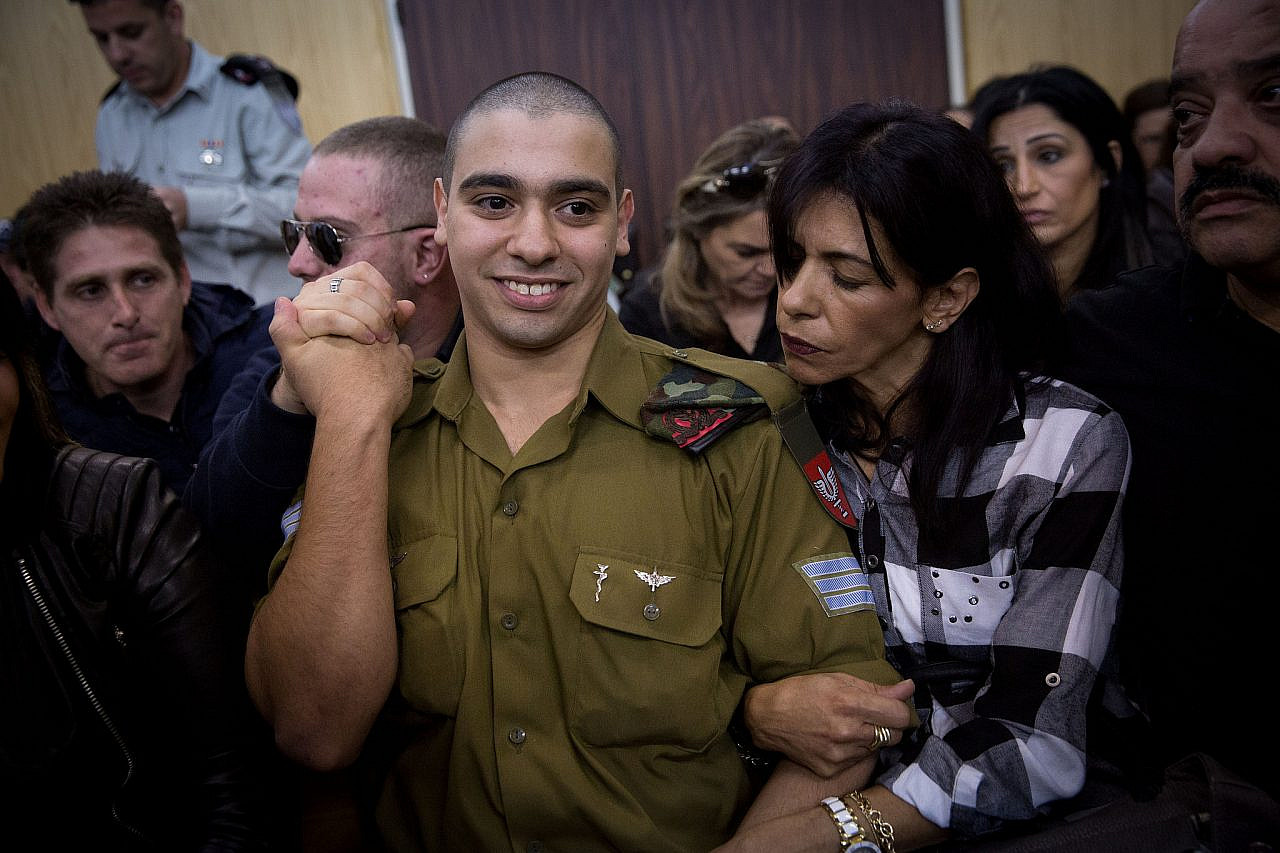 Sgt. Elor Azaria, the Israeli soldier who shot dead a disarmed and injured Palestinian attacker in Hebron in 2016, with family and friends in a courtroom at the Kirya military base in Tel Aviv, January 4, 2017. (Miriam Alster/Flash90)

Today, Abu Shamsiyah leads a volunteer organization called Human Rights Defenders, whose volunteers document the harsh reality around them and upload it to Facebook, including the video of the settlers bulldozing Palestinian shops a few weeks ago. In another recent video uploaded to the Facebook page, settlers can be seen taking over a Palestinian home in the Old City.

While Abu Shamsiyah was talking about the destroyed shops, soldiers were detaining a Palestinian boy at the checkpoint nearby. In H2, which amounts to around 20 percent of the total area of Hebron, the Israeli army has set up around 20 checkpoints, making the movement of Palestinians in the area difficult to the extent of being almost impossible. Some young men approached the soldiers, and Abu Shamsiyah shouted at them to stay away.

He explained that soldiers allow only Palestinians on a limited list of apartment owners to enter the area. “My parents, for example, cannot visit me. They will not be allowed into the neighborhood through the checkpoint. They are off the list. My son cannot come in to visit me either. He was arrested several times, so his name was deleted.

“The destruction of the shops is a small part of a large injustice,” Abu Shamsiyah continued. “Once, this was the city center. I remember how we used to get taxis from here to Jaffa, Yatta, and Gaza. Now it’s all deserted. They turned this place into an apartheid museum.”