After Israeli security forces demolished two structures in an illegal settlement outpost near Hebron, settlers are raising money to rebuild on an Israeli crowd-funding website.

By Noam Rotem and John Brown* 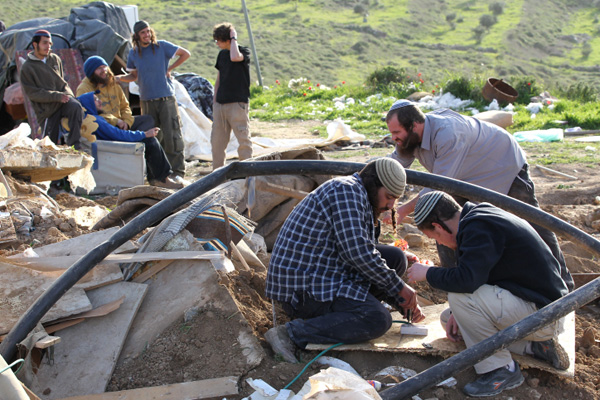 The Israeli military demolished several structures in a settlement outpost called “Givat Gal,” built illegally on private Palestinian land near Hebron earlier this month. During the demolition, settlers attacked soldiers and police officers with stones, for which two of them have since been indicted.

A few days after the demolition, settlers from Givat Gal launched a crowd-funding campaign to raise money to illegally re-building the demolished homes. The campaign, which was hosted on Israeli website “Headstart,” had raised nearly NIS 20,000 ($5,000) of its NIS 60,000 ($15,500) goal at the time of this report. 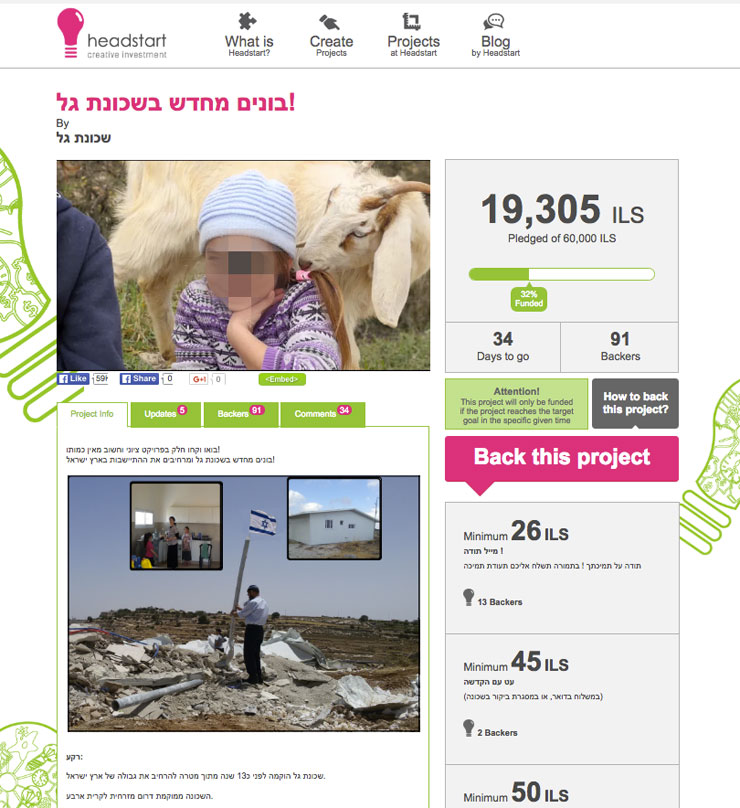 The ‘Headstart’ crowd-funding page to illegally build in an Israeli settlement. (Screenshot)

The illegal outpost of Givat Gal was established 12 years ago as an extension of the settlement of Kiryat Arba, on land the Israeli army’s Civil Administration admits is privately owned by Palestinians. The structures demolished last week were a residential structure and a wooden pergola erected in the name of an Israeli civilian murdered while hiking in the area and an army commander killed during the 2014 Gaza war. It was the first demolition of Israeli settler homes carried out under Israel’s new defense minister, Avigdor Liberman.

According to the indictment filed in a Jerusalem court Monday, a number of settlers attacked IDF and police forces during the course of the demolition, some of whom were injured, and caused damage to state property. One Israeli settler was indicted for throwing a stone at an IDF Civil Administration bulldozer. According to the indictment, a policeman approached the accused and asked him to stop, but despite the officer’s protestations, the man threw another stone, broke the bulldozer’s windshield, and wounded the driver on his head.

Another settler, the indictment continued, goaded and incited the crowd of rioters to attack the police officers, and then proceeded to run toward a human chain of officers, attacked them, and wounded one officer.

Asked about its decision to host the crowd-funding campaign to build an illegal settlement on private Palestinian land, a spokesperson for Headstart told +972’s Hebrew-language sister site, Local Call: “We don’t take a political/religious/ideological stand when it comes to approving projects on the site. The matter was sent to the project’s initiator and we are waiting to receive from him materials clarifying the legality of the fundraising.”

The spokesperson declined to respond whether the company would host a crowd-funding campaign to trespass on privately owned land in the Tel Aviv suburb of Herzliya.

Update [June 22]:
Following the publication of this article, Headstart has removed the campaign from its website.

*John Brown is the pseudonym of an Israeli academic and a blogger. Noam Rotem is an Israeli activist, high-tech executive and blogger at Local Call, where a longer version of this article was first published in Hebrew. Read it here.