Netanyahu has probably spent his Passover vacation trying to reach a deal that would enable the settlers to save face and stay in the government while peace talks continue. The Right is launching campaigns to convince right-wing politicians to vote ‘no.’

With a little more than a week left until the formal deadline for the Israeli-American-Palestinian talks, efforts to extend the negotiations still haven’t produced a breakthrough. Nevertheless, a last-minute deal shouldn’t be ruled out either; often times, the most productive political maneuvering takes place when no news is reported.

On the Israeli side, the best indicators – as always – come from the far right of the political map. A Page 1 ad in Haaretz’s weekend edition, sponsored by The Joint Headquarters (an umbrella organization for some far-right groups), targeted Foreign Minister Avigdor Liberman, who has been said to be behind “a secret deal.” Liberman has previously announced his opposition to a prisoner release that would allow an extension of the talks. The ad, however, claimed that some ministers in his party will vote yes, so the deal will get the necessary votes despite Liberman’s personal nay.

The ad was printed again today in Haaretz, this time on page three. There was also a new front-page ad by the Joint Headquarters, this time targeting Likud ministers Silvan Shalom and Limor Livnat. Livnat was considered a hardliner in the past, but in today’s Likud she is a pragmatist, and therefore a target of the Right. Shalom would like to win his party’s support in his upcoming presidential bid, so calling him out makes a lot of sense for the settlers. This is all part of internal Likud tensions between radical settler groups and the old guard, which still backs Netanyahu. 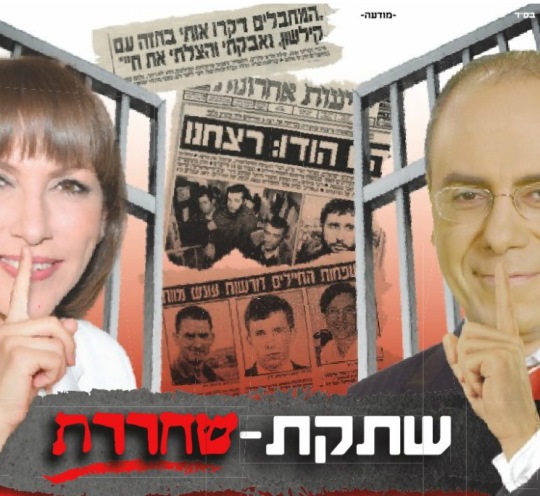 Another battle front for the hardliners is taking place within the Jewish Home party, where party leader Naftali Bennett is doubling down with inflammatory threats against the prisoner release deal, while others – most notably, proactive Housing Minister Uri Ariel – would like to keep their place in the government even if the negotiations continue. Ariel is willing to bet that nothing will come out of the talks, and meanwhile he would like to create more facts on the ground in the West Bank. Following increasingly frequent rumors of a deal between him and Netanyahu that would keep Jewish Home in the coalition, one of his aids had to post a clarification on Facebook, stating that “the minister completely backs party chairman Naftali Bennett and his clear demands against terrorists’ release.”

According to recent reports, a deal to extend the talks would include the release of the final 26 prisoners Israel has committed to – probably including 14 citizens of Israel – and during the next leg of talks, a few hundred more, mostly “light offenders” who are scheduled for release soon anyway. The United States will release Jonathan Pollard, the American citizen convicted of spying for Israel. There are no confirmed reports on the substantive parts of the deal, if there are any at all – meaning that even if negotiations continue, they might be as futile as the previous round. We are still discussing talks about talks for the sake of talking.

I believe that Netanyahu’s goal is to continue the process without reshuffling his coalition. Bibi simply doesn’t trust Labor and the center to support him in case he loses his base on the right; so much of the political battle comes down to the confrontation between the radical settlers, who wish to prevent the prisoner release, and the more pragmatic settlers, who think that this government serves them so well that it would be complete madness to bring it down over a process that won’t lead to the creation of a Palestinian state anyway.

Netanyahu is probably trying to reach an arrangement that would enable all the settlers to save face and stay in the government, the way he allowed a spike in settlement construction when the talks kicked off. So we might see once again that peace talks go hand in hand with more settlements. This obviously says a lot about this process; the bottom line is that as long as the settlers are in the government – any and all Israeli governments – the process is pretty meaningless.

Netanyahu has an alternative: Labor would support the government, and if the talks get serious, he could invite the ultra-Orthodox to join the coalition as well. Yair Lapid is no peacenik, but he won’t be able to bring down a coalition that reaches a breakthrough on the Palestinian issue, and even more importantly, he simply doesn’t want elections. In other words, the problem is not with the Knesset, but with Bibi himself.

Related:
The diplomatic process is not real until this government falls
The peace process needs a whole new outlook
Bennett’s response to Palestinian UN bid: Annexation