Nothing can excuse the mauling of sheep or the uprooting of trees, yet this type of vandalism is protected by Israeli security forces in the West Bank on a regular basis. 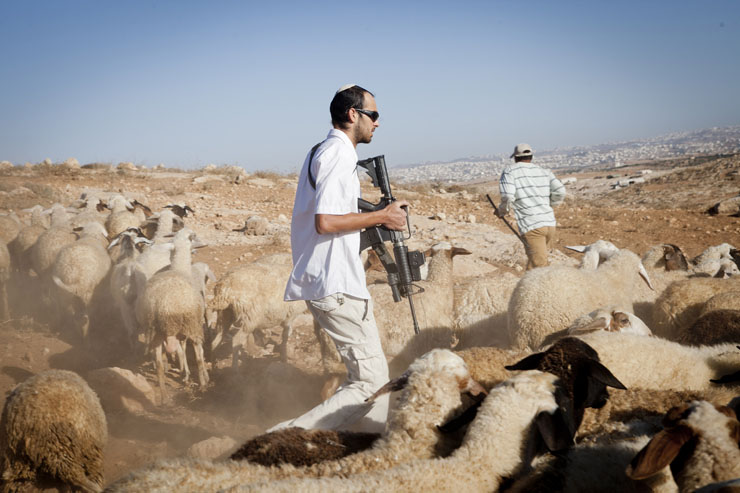 A Jewish settler from the illegal settlement of Mitzpe Yair chases the flock and threatens the shepherds of Gwawis. He is holding an M16 rifle, issued to him by the Israeli army, as part of his paid job as a security coordinator. The law states that he is not allowed to take any action outside the settlements’ borders, September 18, 2012. [illustrative photo]

With some surprise, we learned a couple of days ago that one of our old files, from October 2011, has recently matured into an indictment. In December 2012, the police prosecution indicted two settlers for assaulting a Palestinian, Muhammad Al Qarajat, next to the settlement of Karmei Tzur.

The two settlers, accompanied by a dog, attacked Al Qarajat who was guiding his herd, and after attacking him physically, set their dog on the sheep. The dog bit three of the sheep, one of which died later on.

Al Qarajat prudently fled, while the settlers were throwing stones, damaging another Palestinian’s car. He quickly summoned the police, who – lo and behold – actually did their job: took statements, photographed the damage, and the result was that rarest of wonders, an indictment against violent settlers.

And if you think we were surprised, you should have seen the settlers. Karemi Tzur is a troublesome place. In June 2012, according to the complaints we received, the settlement’s “Ravshatz” – a settler who is in charge of the security of the settlements and who commands soldiers (similar to a lawless sheriff) – physically attacked Palestinians who were working their lands near the settlement. According to the complaint, the Ravshatz showed extra good taste by cursing the name of Islam’s founder Muhammad as he attacked the Palestinians. The settlers he led also cursed two international volunteers, saying they were “smiling like Nazis.” The Ravshatz then summoned soldiers, who used heavy violence against both the Palestinians and the volunteers who attempted to document the incident. One of the soldiers, according to the complaints, even tried to steal the camera. The video was enough to release one of the beaten and wounded Palestinians. It’s worth mentioning that during his hearing, the military prosecutor claimed he was wounded when “the butt of one of the soldiers’ rifles hit him accidentally.” A likely story. Despite the video, the investigation of the Ravshatz was recently closed, as the Hebron police claimed it could not identify the perpetrator.

In April 2010, two Palestinian brothers complained that some 250 trees they planted on their land, near Karmei Tzur, were uprooted. Witnesses reported a Karmei Tzur security vehicle and a military vehicle seen there soon before the trees were uprooted. The settlers had been causing trouble around that plot of land for a year before the uprooting. This case, too, was closed.

It’s important to note, in what is becoming the unplanned theme of this blog, the close collaboration between the soldiers of the IDF and the settlers; and it’s also important to note the ruthless violence of the settlers. Again, given the concept of “security over all” widely accepted in Israel, they would probably manage to explain away the attack on Al Qarajat; he was a Palestinian within eyesight of a settlement, hence he could be considered a “threat.” No such excuse can explain the mauling of sheep; that is sadism pure and simple. No such excuse can explain the uprooting of trees; that is vandalism, pure and simple. Yet this vandalism and sadism is what the soldiers of the IDF dedicate their efforts to protecting.

And, of course, an indictment does not necessarily mean a conviction. And even were there to be a conviction, our judges have long become known as very merciful towards Jews who are violent towards Palestinians. To be continued.