Flyers posted in villages near Gush Etzion warn Palestinian laborers they will be banned from nearby settlements should they cooperate with anti-occupation groups. 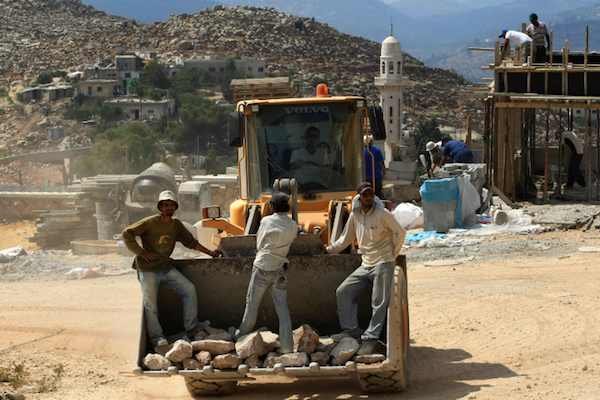 Settlers in the southern West Bank posted flyers warning Palestinian laborers not to cooperate with Israeli human rights activists or organizations if they want to keep their jobs.

Tazpit News Agency, a settler-aligned English-language news outlet, reported earlier this week that Israeli settlers in the Gush Etzion settlement bloc have been posting these intimidating flyers around Palestinian villages nearby. The flyers threaten to ban Palestinians who cooperate with human rights groups from working in settlements there.

According to the flyer, which was printed in Arabic, Palestinians who want to “provide a living” for their families must refuse cooperation with the organizations and people listed. The flyer includes photos and names of prominent Israeli and Palestinian activists, and singles out Ta’ayush and Rabbis for Human Rights, two organizations that accompany and protect Palestinians in the occupied West Bank from threats of settler violence. 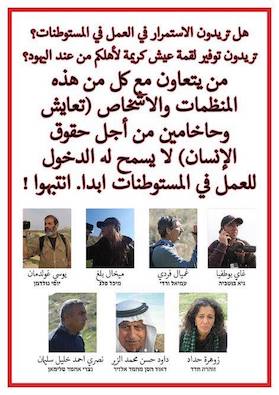 “Do you wish to keep working in the settlements? Do you want to provide a living for your families from the Jews? Whoever cooperates with any one of these individuals and organizations (Ta’ayush and Rabbis for Human Rights) will never be allowed to enter the settlements for work. Be warned!”

“On the one hand this is a classic divide and conquer tactic,” says Guy Butuvia, an Israeli activist with Ta’ayush, an Israeli-Palestinian volunteer grassroots group founded during the Second Intifada. “They want to create a division between Palestinians and human rights workers who support the Palestinian struggle to remain on their land, so as not to disturb the land theft that is taking place.”

“On the other hand,” he continues, “over the years, the occupation has made it difficult for Palestinians to make a livelihood, whether it’s by taking their land, resources, water, or strangling their economy. Now those who are forced to work in the settlements are being threatened. This is part of an attempt to limit the rights of Palestinians as well as their access to legal recourse.”

Since the Second Intifada, Israeli authorities have significantly limited the entry of Palestinian laborers into Israel. In West Bank settlements, however, Palestinian workers are able to enter and work more freely. Around 36,000 Palestinians work in settlements in the West Bank, many in construction, where they earn up to three times the average Palestinian wage.

According to TPS, the flyers are a reaction to Palestinians who have been working at the behest of “extreme leftist” organizations and “illegally taking over lands around and within Israeli communities in the eastern part of Gush Etzion.” TPS further reported that a Hebrew translation of the ad was distributed to settlers in the area, and that a list of Palestinian families working in settlements there will be distributed to allow each employer to “make his own decision” — presumably over whether or not to continue employing them.

Butuvia says similar flyers were distributed in the same area a year ago by members of far-right group Im Tirzu. Those flyers personally targeted Israeli human rights workers for their “anti-Israel activism” and their “activities against the IDF.”

“These flyers are yet another reminder that we are a target of far-right groups, which get their marching orders from the Israeli government. The goal is clear: to expel Palestinians from their Area C of the West Bank [under full Israeli military control – E.K.] and minimize their ability to defend themselves.”

While settlers are busy threatening Palestinians over alleged land theft in Gush Etzion, the Israeli government has been busy allocating around 300 acres for the planning of a new neighborhood that would expand the settlement of Efrat, widely considered the capital of the bloc. The new Givat Eitman neighborhood is expected to expand the built-up area in Gush Etzion up to Bethlehem’s southern outskirts, effectively surrounding the city with settlements.

During a recent visit to Netiv Ha’avot, an outpost in Gush Etzion that was partially demolished after the High Court of Justice found that six of its structures were built on private Palestinian land, Prime Minister Benjamin Netanyahu said that if it was up to him, “There won’t be any more uprooting or halting settlements — just the opposite: The Land of Israel is ours, and will remain ours.”