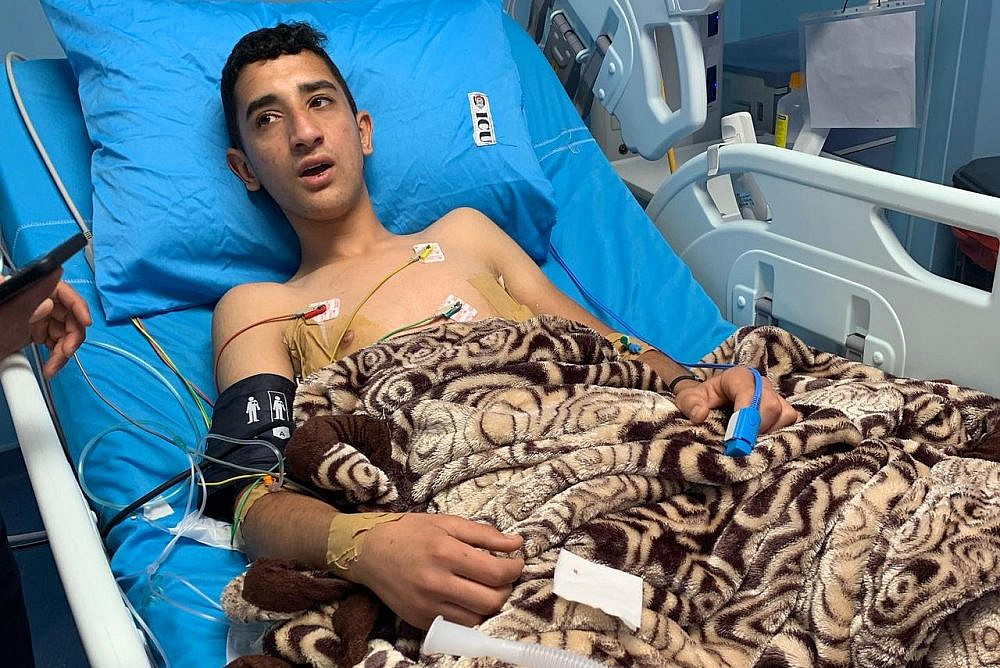 Muhammad Ghunaimat, 17, is lying in a hospital bed in Hebron with gunshot wounds to his stomach and back. The bullets were shot by either Israeli settlers or soldiers — Ghunaimat is not sure which, because both groups opened a torrent of live fire on him and his friends last Saturday.

Earlier that day, a group of armed Israeli settlers descended upon a Palestinian road near Surif in the Hebron area of the occupied West Bank, where Ghunaimat and his family live, and blocked the passage using large rocks. The road runs between Surif and Safa, allowing residents of each village to access their agricultural land and each other.

Hearing of the settlers’ actions, Ghunaimat and two of his friends set out to try to remove the barricade, when settlers suddenly began throwing stones at them. Several more Palestinians from Surif arrived and started throwing stones back at the settlers. Then the shooting began.

Photos taken by Palestinian residents from the scene show gun-toting settlers standing side by side with a small group of soldiers in the area. According to Al-Ahly Hospital in Hebron, Ghunaimat and his friends are all suffering from injuries caused by live ammunition, but are in a stable condition. 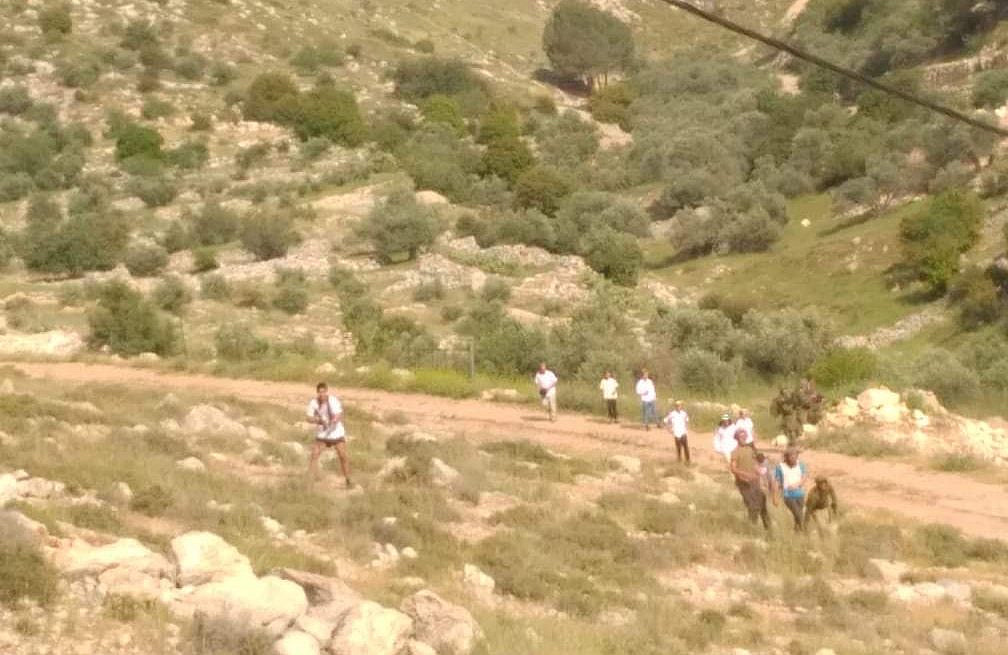 Badawi Ghunaimat, Muhammad’s father, was present at the scene on Saturday. “When [the settlers] started throwing stones, Palestinians also started throwing stones back in self-defense,” he recounted. “And [the settlers] immediately fired live rounds at us. One of them fired a lot toward us. The three soldiers who were with them also opened fire, along with other settlers. The whole time we were moving backward, they kept moving toward us.

“I saw my son collapse on the ground, his shirt soaked in blood,” Badawi continued, his voice tight. “I lifted him into the car and we tried to get away, and they shot at our car. When we got to the emergency room, I could see he’d been shot.”

‘They were firing wildly with live ammunition’

Palestinian residents report that extremist Israeli settlers from Bat Ayin, a settlement which lies to the west of Surif, have been trying to take over their land for the past half year. Six months ago, groups of settlers set up tents west of the road, on top of a hill about a kilometer away from the settlement, outside its municipal boundaries.

Since then, Palestinian residents say, they have been prevented from accessing their agricultural land, and have been subjected to settler attacks, vandalism, and other forms of harassment.

Muhammad’s cousin, Ahmad, was also driving along the road on Saturday after picking up his two children from his mother’s house in Safa, when he found the way ahead was blocked by stones. Ahmad called his father to come and help him, and his father arrived with several other residents.

Several witnesses confirmed that a settler then opened fire, and three soldiers who had arrived at the scene also shot at the Palestinians, including with tear gas. The bullets struck Ahmad’s car, which was still carrying his two children, aged five and three years old. “I was so afraid, because they were firing wildly with live ammunition,” he said. “It’s lucky that the little ones weren’t hurt. My father managed to move a few of the stones, and I got out of there with the kids.” The bullets punctured the car below one of the right-hand doors.

A bullet entry mark in the door of Ahmad Ghunaimat’s car, in which his two young children were sitting, Surif, occupied West Bank, April 23, 2022. (Courtesy)

Crime without punishment in the West Bank

The confrontation on the road went on for over two hours, residents said. Ghadir Ghunaimat, Muhammad’s aunt, whose house is the closest to the settlers’ outpost, recalled that it was only toward the end that a large group of soldiers and police arrived at the scene, and the settlers returned to their nearby tent.

“I kept my children in one room during the attack,” Ghadir said. “The settlers and the soldiers kept pushing the Palestinians back, until they reached my house, which was filling up with tear gas fired by the army.”

Ghadir is emphatic about the link between Saturday’s violence and the takeover of Palestinian land in the area. “It’s been going on for half a year, since [the settlers] put up their tent on the hill and started setting up an outpost,” she explained. “Groups of youths come down from there. They uproot trees, destroy agricultural structures, and try to attack whoever’s passing by. It’s especially bad on Saturdays, because they congregate, and the attacks are organized.”

Since 2020, the Israeli human rights group B’Tselem has documented 618 incidents of Israeli settler violence, which includes both physical assault and damage to property; the group’s records show that the number of such attacks in March 2022 was higher than any month in 2021. According to police figures obtained by Haaretz earlier this year, more than 95 percent of cases relating to violence by Israelis against Palestinians are closed without any action being taken, most commonly on grounds of “unknown perpetrator.” 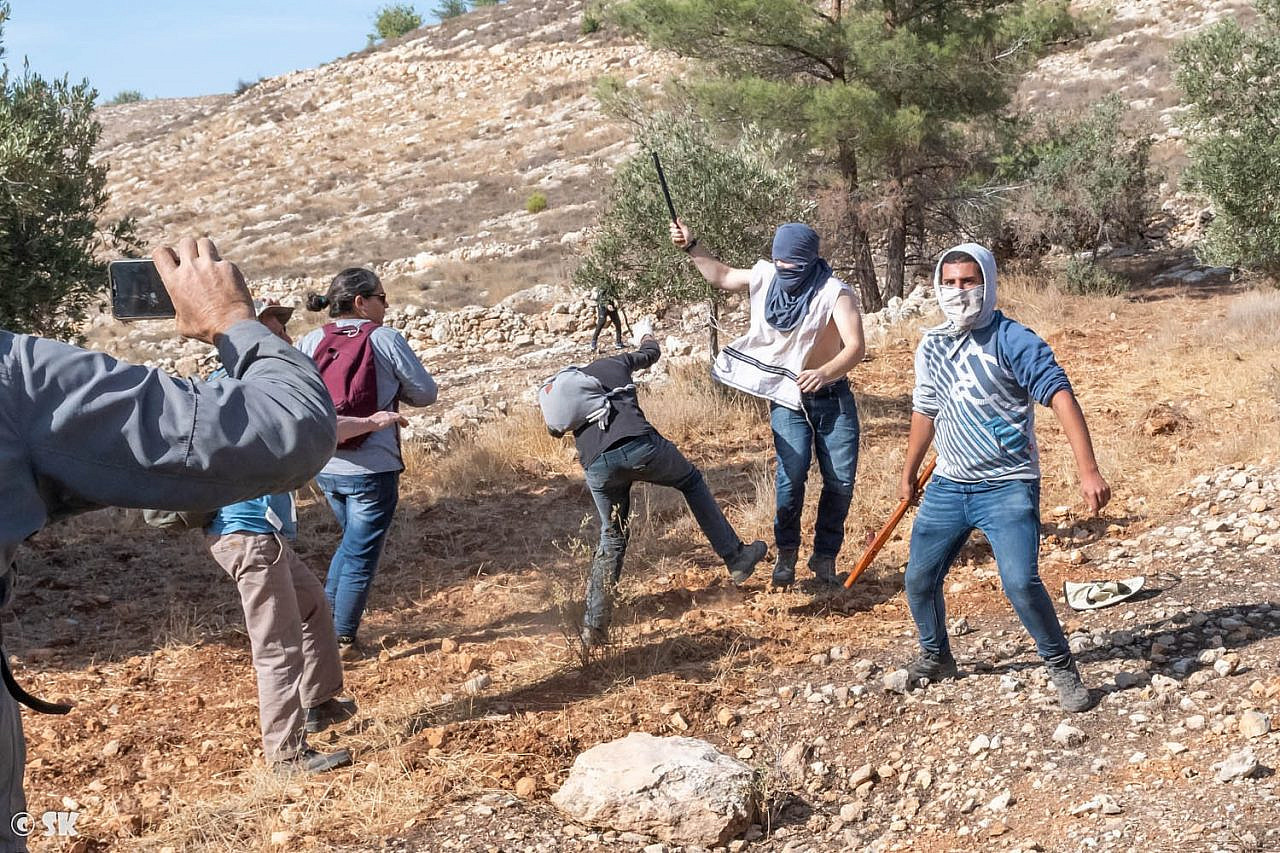 Regarding the incident, the IDF Spokesperson stated that the army “received a report about violent friction between [Israeli] residents and Palestinians near Givat Ahuvia, in the area of the Etzion Division. An army unit was dispatched to the area and used protest dispersal methods to break up the crowd. There were no injuries.”

After learning that three people were injured by gunfire during the event and required hospital treatment, and that two of the wounded are still hospitalized, the army responded that the incident would be investigated by the police. The police did not respond to a request for comment by the time of publication.