‘Settlers say that they bought the house, but they haven’t shown us any documents,’ says one Palestinian woman whose home settlers took over Tuesday morning. ‘Now they’re sleeping in my bed; all of our clothes and furniture is still inside.’

Israeli settlers took over seven homes in the Silwan neighborhood of East Jerusalem Tuesday morning, primarily in Wadi Hilwe, the neighborhood’s main thoroughfare. According to residents, the settlers arrived at around 2 a.m., escorted by large numbers of riot police.

“I was still awake, here in the store,” said neighborhood resident Ahmed Qareen, the owner of a small market in Wadi Hilwe. “I saw a large group of settlers and police but I didn’t think that they were going to take more homes. I assumed that it was somehow related to your (Jewish) holidays now, that they were walking around here at such an hour.” One of the houses that the settlers took over in the dead of night was the Hayat family home. Like many other houses in the neighborhood, the building is split into a number of apartment units, most of which are occupied by family members. Two of them are now occupied by settlers.

In the building’s internal stairwell that connects the apartments, sits Bushra Hayat, whose eyes are dashing back and forth tracking the police officers walking into the apartment that until yesterday was hers. “We have two apartments here, one that my father rents out and we live in the other one. The two apartments were empty yesterday. My father wasn’t here and I slept at my uncle’s house, here, downstairs. They knew ahead of time when the houses would be empty and that’s why they came [now].”

“They know what we are doing at all times,” Ahmed Qareen says with a smile. “Look around: the whole neighborhood is full of their security cameras, some of them are pointed directly into our houses. They know better than us what’s happening here.” 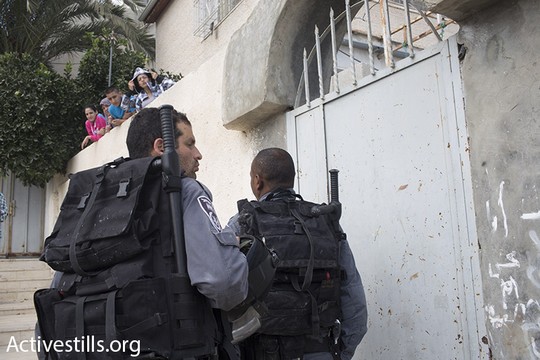 Israeli riot police at the entrance to the Hayat family home, September 30, 2014. (Photo by Oren Ziv/Activestills.org)

Ahmed knows what it’s like to live right next to settlers in Silwan, of which there are now some 70 families. Five years ago, Ahmed was shot in his leg at short range by an Israeli soldier, right in front of his son. (Hebrew) The Israeli prosecution decided not to put the soldier on trial, instead closing the case. (Hebrew)

The dirt alley that leads to the Hayat family home is littered with stones and various flags, perhaps a sign of what took place here early this morning. But by the afternoon, almost complete quiet stood over the place. A group of Palestinian youths is standing outside the house and are looking at the cops, who are coming and going. “What are you waiting for?” I ask. “For Allah’s benevolence,” the oldest one answers. 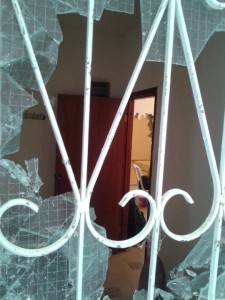 A wall that has been broken down can be seen through a broken window in the Hayat family home, September 30, 2014. (Photo by Orly Noy)

Inside the building, Bushra is going up and down the stairs, making her way in between the police officers, trying to steal another glance into the apartment in which settlers are now holed up. Earlier she broke a side window and now through it she can see that the new tenants have already managed to tear down one of the walls. They’ve also already put bars on the outside windows — efficient. All the while, she’s trying to find out how her diabetic father is doing; his condition deteriorated after clashing with the police and he is now in the hospital. “He arrived early in the morning, when he heard. When he got here, they had already changed the locks and he wasn’t able to open the door to the house. I wasn’t able to with my key either.”

“They say that they bought the house,” she continues,” but they haven’t shown us any documents. We asked them — I yelled at them to show us a purchase contract, but they didn’t show us anything.”

In many ways, the settlement in Silwan is considered to be the flagship of the the East Jerusalem settlements, particularly because of its location — nearly touching the Old City’s walls — a short walk from the Dung Gate. The goal is clear: changing the neighborhood’s national (religious demographic) character, first into a mixed Israeli-Palestinian neighborhood, but with aspirations to paint as much land as possible in blue and white.

This project, in which the central player is a settler NGO called Elad, is taking place on two parallel tracks: the first track is taking over public spaces like the City of David National Park run by Elad; the second is by taking over private homes. Some of the homes are handed over to the settlers who claim they have purchased them, and others are taken with the help of official Israel using the Absentee Property Law, despite the fact that a number of attorneys general have been highly critical of the law’s use in Jerusalem.

To learn more about the close cooperation between Israeli government actors and settler organizations in taking over properties in Silwan, I recommend reading this comprehensive report by Ir-Amim: Shady Dealings in Silwan.

An hour later, Bushra takes advantage of the police officers’ lunch break in order to once again try and go see what’s happening inside the house. “I can’t stand it,” she says, choking up. “They’re sleeping in my bed right now. All of our things are still there. All of the furniture, our clothes, everything. Even my baby brother’s diapers.”

Related:
Israel’s very own tunnels of dread in Jerusalem
The illusion of religious freedom in Jerusalem