In the latest of a number of home takeovers in Palestinian neighborhoods of East Jerusalem, settlers took up residence in a home they said belonged to Jews before the establishment of the state of Israel. 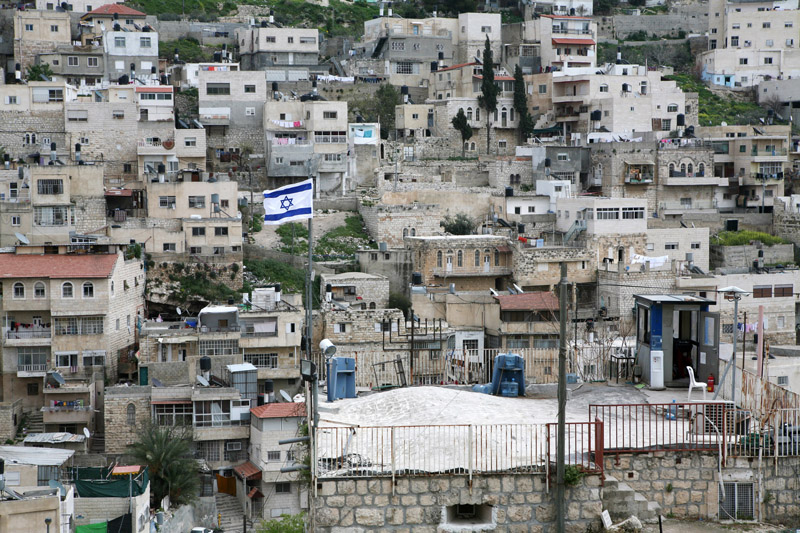 A Jewish settlement is seen in the Palestinian neighborhood of Silwan, East Jerusalem, March 28, 2007. (Activestills.org)

A group of Israeli settlers moved into an apartment building in the East Jerusalem neighborhood of Silwan on Thursday.

The group of at least 20 belongs to the Ateret Cohanim settler organization, which purchases properties in neighborhoods of East Jerusalem and has taken legal action in order to evict the Palestinian owners of those buildings.

In this latest case, it claimed that the white stone, five story building was located on land belong to a historical Jewish real estate association established a century ago by the Yemenite Jewish community of Jerusalem.

One Palestinian family of eleven, headed by Jawaf Abu Sneineh, remained in their apartment, claiming that they had already paid the year’s rent. They are reportedly still living there, though they say they are afraid of the settler residents above them, according to the Associated Press.

The late night move almost doubled the number of Jewish settlers in the neighborhood and added to already high tensions regarding disputes over land ownership in the area.

Silwan is currently home to several hundred Jewish settlers and some 50,000 Palestinians. It is an impoverished area just on the outskirts of the Old City of Jerusalem, and it has been the target of the Ateret Cohanim organization in recent months.

Palestinians have frequently resisted the eviction orders in court, where they say the Jewish Israelis are almost always given preference.

Many of the takeovers of Palestinian homes have taken place in the dead of night, in the efforts to “avoid unnecessary friction with some of the local Arabs during the day,” according to a statement released by Ateret Cohanim.

The settlers, holding just as many bags as they could carry, as they quietly made their way through the alleys, were accompanied by armed soldiers–a move that critics say only further exacerbates the tensions.

Americans for Peace Now president and CEO Debra DeLee condemned the takeover and said in a statement, “By not blocking the settlers’ hostile takeover of assets in a Palestinian neighborhood, Israeli authorities are fanning the flames of violence and supporting the extremists who strive to thwart a future Israeli-Palestinian peace settlement.”