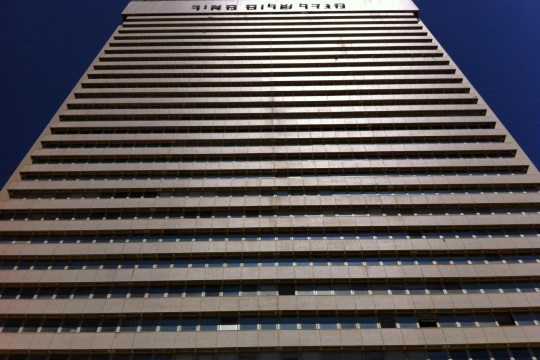 In the innocent year of 1909, a new Jewish neighborhood was established on the outskirts of Jaffa. A modest crossing of two streets, it was designed according to distinctly secular Jewish values. At its focal point, just north of the intersection stood not a synagogue but a high school. It was an elaborate, romantic structure. Its facade featured two columns representing Boaz and Yachin, the pillars of Solomon’s Temple.

Jewish culture had always centered around education, and the Zionist founders of Tel Aviv believed that so would the new Jewish society they were helping to establish. Fast forward 50 years, and the high school was torn down. The State of Israel, a decade old at the time, was priding itself on progress, and progress manifested as a skyscraper: 120 meters and 34 stories tall, the tallest tower in the Middle East, with the street was directly beneath it, forming a futuristic automotive underpass. The broader lower floors featured a wax museum, a public library and a department store. The roof over them bore an entire amusement park, while the tower’s top floor offered a popular observatory.

The Shalom Meir Tower was named after the father of its two developers, brothers Morderchai and Moshe Meir. Soon it is became commonly known simply as the Shalom Tower. I pass by it almost every day without thinking much about it. The sixties are over. Loftier towers rise over central Tel Aviv. The wax museum closed down years ago. No longer may visitors to the first Hebrew city witness its strangest exhibit: a wax reenactment of Charles Manson and the Family murdering Sharon Tate and her dinner company. “Meirland” was disassembled, ferris wheels and all. 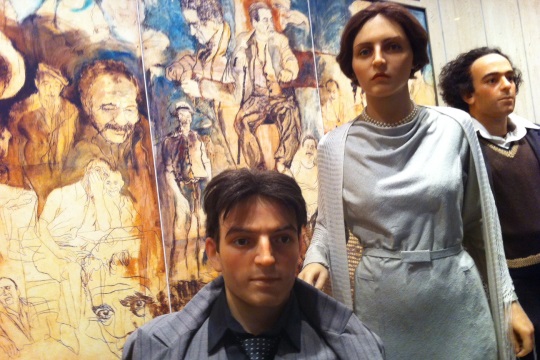 Penn, Rovina and Shlonsky on display

Last night, for some reason, I mentioned that ferris wheel. I was passing underneath the tower with my girlfriend, Ruthie, and found myself looking up to where it once stood, all colorful and hopeful. “You got to see the Shalom Tower at its days of glory,” she said, “I was too young. Even the department store was gone when I first came to Tel Aviv from the South.”

She’s right, I thought, I was witness to history. We speak of the demolished high school as history. Its silhouette is today the symbol of Israel’s society for preservation of historic places, but by now the the 70s and 80s are also a past worth exploring. Ruthie considers the Shalom Tower a gem, and was sorry when nondescript new developments on our street blocked it from our balcony view. I decided to pay it a visit and see what is left of its past glory.

Upon approaching, I pause and take photos, feeling fairly stupid. During the 60s, the Shalom Tower starred in Tel Aviv’s postcards. today it is thought of by all (except Ruthie) to be another example of Tel Aviv’s dubious post-bauhaus architecture. It is perhaps symbolic that I visit it on the same day that architect Ram Carmi, who designed the city’s monstrous central bus terminal, passed away. The bus terminal is the world’s biggest and contains over 1,000 shops. It was dismissed as a white elephant within less than a decade of its 1993 dedication. Did the Shalom Tower simply take a bit longer to prove a similar failure?

Not quite, so it seems. The lobby is pleasant, still decorated with a large scale mosaic by artist and author Nahum Guttman. A sign over an elevator door reads: “to the library.” I take the elevator and find to my surprise that the old library is not only active, but is thriving. At least 20 young urbanites are here, working on laptops in a peaceful atmosphere. There’s some renovating going on. This library has a future ahead of it. In a city with very few libraries, this is a fond surprise.

Another surprise awaits me on the mezanine floor, which has been turned into a museum of sorts for the city’s history. Past a scale model of central Tel Aviv, and and exhibition of old newspaper ads, six familier faces greet me with frozen stares. The wax is still here! Someone rescued the great Hebrew poets Alterman, Bialik, Penn, Goldberg and Shlonsky, as well as actress Hanna Rovina from the basements, and sat them around an imagined Dizingoff cafe table of the early fifties.

Everything has changed in the Shalom Tower, but nothing fully vanished. The museum is now a single exhibit. The department store has split into many stores. The observatory closed, but the elevators are free for all. I travel to the 29th floor and catch a marvelous view over downtown through a hallway window. The new towers rising over Rothschild are particularly striking. They may put the Shalom Tower to shame, but they can’t beat its perseverance. 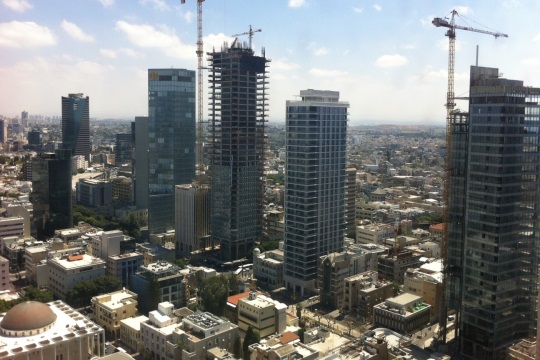 The new skyline of Rothschild Blvd.

On the way down, I think of Tel Aviv’s uneasy relationship with the very concept of history. It is a city established on the denial of history. In 2009 Tel Aviv celebrated its centennial, entirely ignoring Jaffa’s 3,800 years of existence. Imagine if Barcelona rejected the Gothic quarter as a separate town, and claimed to be 110 years old today, all because l’Eixample, its first modern quarter, was established in 1903.

Tel Aviv seldom recognizes history before traces of this history are gone or badly damaged. The old high school was torn down. The precious Bauhaus buildings fell into disrepair before being recognized as a UNESCO world heritage site. Tel Avivians were surprised to learn that their boxy abodes were modernist masterpieces. Journalist Doron Rosenbloom likened us to “a sack-clad beggar, who learns one morning that for years he has been wearing a Coco Chanel gown.” We look at our city, see how modest it appears to be, how lacking it is in grand boulevards, in ornate facades, in lasting culinary establishments, and dismiss it as a drifting dune.

Current Mayor Ron Huldai is known for his love of flashy projects. The newly renovated national theater (designed by none other than the late Mr. Carmi) has drawn severe criticism from lovers of the city’s fabric. Our unique symphony hall, and even a few of the city’s beaches, are now subject to development. Meanwhile, police this month attempted to close down “The Block,” Tel Aviv’s state of the art dance club, citing drug trade. Judge Guy Haiman rejected the order, and reminded the police that “This is a vibrant city, whose reputation as a center for around-the-clock activity has gone far and wide.”

Had our society remained centered on education, the value of the city’s aesthetic and vitality would have demanded less explanation. Tel Aviv’s special brand of memories is unique and delightful. Our historical perception as Israelis is so full of dissonance that we overlook much of what is good in real time, just as we ignore so much of what is bad. Appreciation of the present and of the recent past is the first step in preservation. It’s up to us to keep our eyes open for all that is worthwhile, even if it is goofy, or boxy, or poor, even if it is graced by neither Boaz nor Yachi, even if its glory days are over.