“A concerned citizen” and a radical rightwing MK claim to have found in trash bin an air force helmet and some secret documents belonging to Yonatan Shapira, a former IDF pilot and one of the most recognized anti-occupation activists 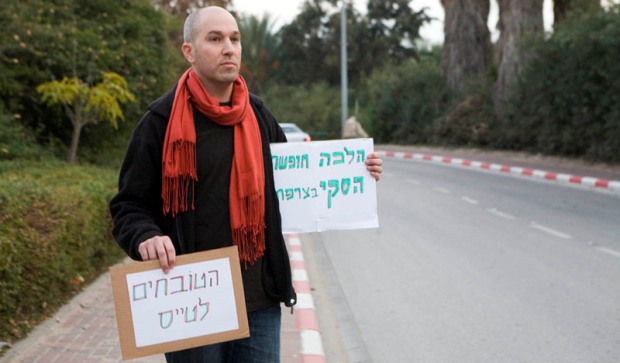 Israeli news site Ynet is running today an exquisitely odd story, seemingly incriminating former Air Force pilot and prolific activist Yonathan Shapira. According to Ynet, a “concerned citizen” helping a friend repair a flat noticed a strange bundle in the trash bin. As a “reservist of 16 years” he was “shocked and appalled” to discover in the bundle a pilot’s helmet, secret navigation documents and other equipment, with the rucksack and the helmet bearing the name of Yonathan Shapira.

Instead of taking it straight to the police, the citizen took his loot to the most Kahanist of MKs, Michael Ben Ari (National Union), for a photo-op, and only then did the pair take the items to the police, which in turn delivered them to the IDF.

Shapira first gain notoriety in 2003, when he and 26 other Air Force pilots signed a letter refusing to bomb the Gaza Strip and take part in targeted assassination. He has been in and out of headlines ever since, most recently thanks to his participation in the two Freedom Flotillas and his spraying of “Free Gaza and Free Palestine” and “Liberate all ghettos” on the wall of the Warsaw Ghetto. He himself denied any connection to the recovered items, stating he had left the army eight years ago and describing the entire story as bizarre. It should be noted Shapira is currently in the United States.

Even more bizarrely, the IDF did not make do with their laconic “the matter is under investigation” statement,  but thanked our alert citizen profusely. You can watch the Ynet video here; notice that for some reason, Ben Ari and the concerned citizen are holding their photo-op in an all-night kiosk.

An Air Force pilot who had served in the past decade in a similar squadron as Shapira told +972 that he has never personally seen a helmet like that used in the squadron, and that pilots do not take their helmets home. He described the story altogether as “very strange”. I briefly served in the Israel Air Force myself, and from my very limited experience, the helmet looks more like something used in training courses – not in combat choppers or jets (although once again, my contact with either kind was limited, so I’m happy to be proven wrong).

Going back to the Ynet report, I couldn’t help but notice our concerned citizen himself speaks in an Air Force (or wannabe Air Force) manner of speech – short, curt phrases peppered with military terms, up to and including describing his trips to the garbage bins as “sorties” (gichot). What’s more, I find it extremely strange the his face is pixelated – a courtesy usually provided by the media to Air Force pilots and other elite officers in the army.

It’s a hunch, but it wouldn’t seem far fetched for me to assume that the concerned citizen himself has some connection to the Air Force (he may or may not be an elite officer himself, but it seems Ynet believes this to be the case, at least for now), and certainly some connection to MK Ben Ari (close enough to summon him late at night to share his findings).  I could be mistaken, but to me it seems like a strange yet obvious framing attempt. We are currently awaiting comment from the IDF spokesperson on the issues raised in this piece, and I’ll update here if any developments ensue.