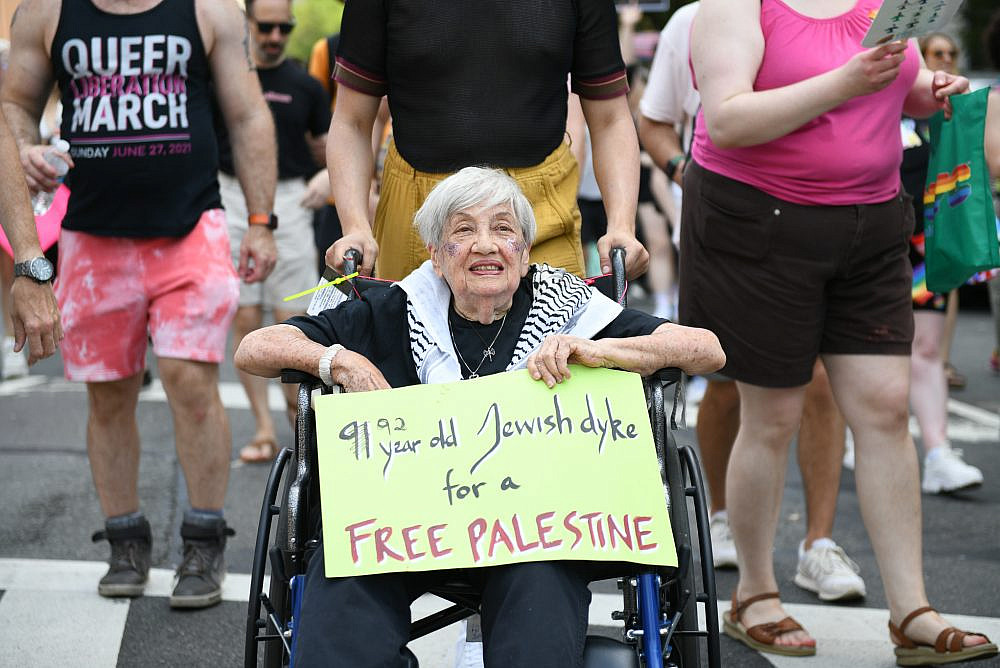 Shatzi Weisberger, a lesbian, Jewish anti-Zionist and lifelong organizer, and a source of inspiration and strength for thousands of people, died on Dec. 1, 2022, at the age of 92. She was, along with many queer Jews like herself, committed to Palestinian liberation; now, as our ancestor, her memory will fuel us until Palestine is free.

Shatzi was 89 years old when I met her through the New York City chapter of Jewish Voice for Peace (JVP-NYC), and her solidarity with the Palestinian struggle dated back decades. Her life’s work spanned the movements for queer liberation and racial justice, the women’s movement, and anti-nuclear activism. A nurse for 47 years, she joined the AIDS Coalition to Unleash Power (ACT UP) in the 1980s and cared for AIDS patients during the height of the epidemic. With the rise of mass incarceration, she handed out issues of abolitionist newsletter No More Cages on New York City sidewalks. And while she grew up a Zionist, after coming to terms with Israel’s oppression of Palestinians she consistently made herself visible as an anti-Zionist Jew. She brought anti-Zionism into every other movement she was part of, because for her, it naturally belonged.

What I found remarkable about Shatzi when I met her — besides her very existence as a self-proclaimed 89-year-old Jewish dyke for Palestinian liberation — was that she was still working to figure out what her role was in that political moment and at that stage in her life. She had recently trained to become a death educator, understanding that her years of caring for dying people, and her proximity to her own death, uniquely positioned her to talk to people about “the art of dying.”

Shatzi had been working those muscles — honing and adjusting her role in the world — her whole life. She was fueled by a legacy of people who dedicated their lives to their principles: her great-grandfather, Samuel Gompers, was the founder of the American Federation of Labor, and her mother, May, also a lesbian, served as grand marshal of Pride. Shatzi said she had “organizer’s blood,” and carried on that lineage by living her values. After completing a Master’s degree in psychiatric nursing, Shatzi found that the field was abhorrent to her and left it, organizing against the psychiatric practices of the time instead. As a young white woman on Long Island awakening to anti-Blackness, she began organizing against racist redlining practices. And when she ended an 18-year marriage and came out as a lesbian — adjustments of massive proportions — she threw herself into the feminist and queer struggles.

For many years, Shatzi’s commitment to social justice movements coexisted with Zionism, another inheritance from her family. Her politics changed because she never considered the process of getting into alignment with her values to be finished: she decided that if she was going to figure out her place in the women’s movement as a Jewish lesbian, she ought to “learn more about the Middle East.” In doing so, she arrived at the position that Israel, which purported to speak in the name of Jews, was enacting a slow genocide against Palestinians on Palestinian land. In a 2020 conversation with JVP-NYC, Shatzi said that this realization “just broke my heart.” 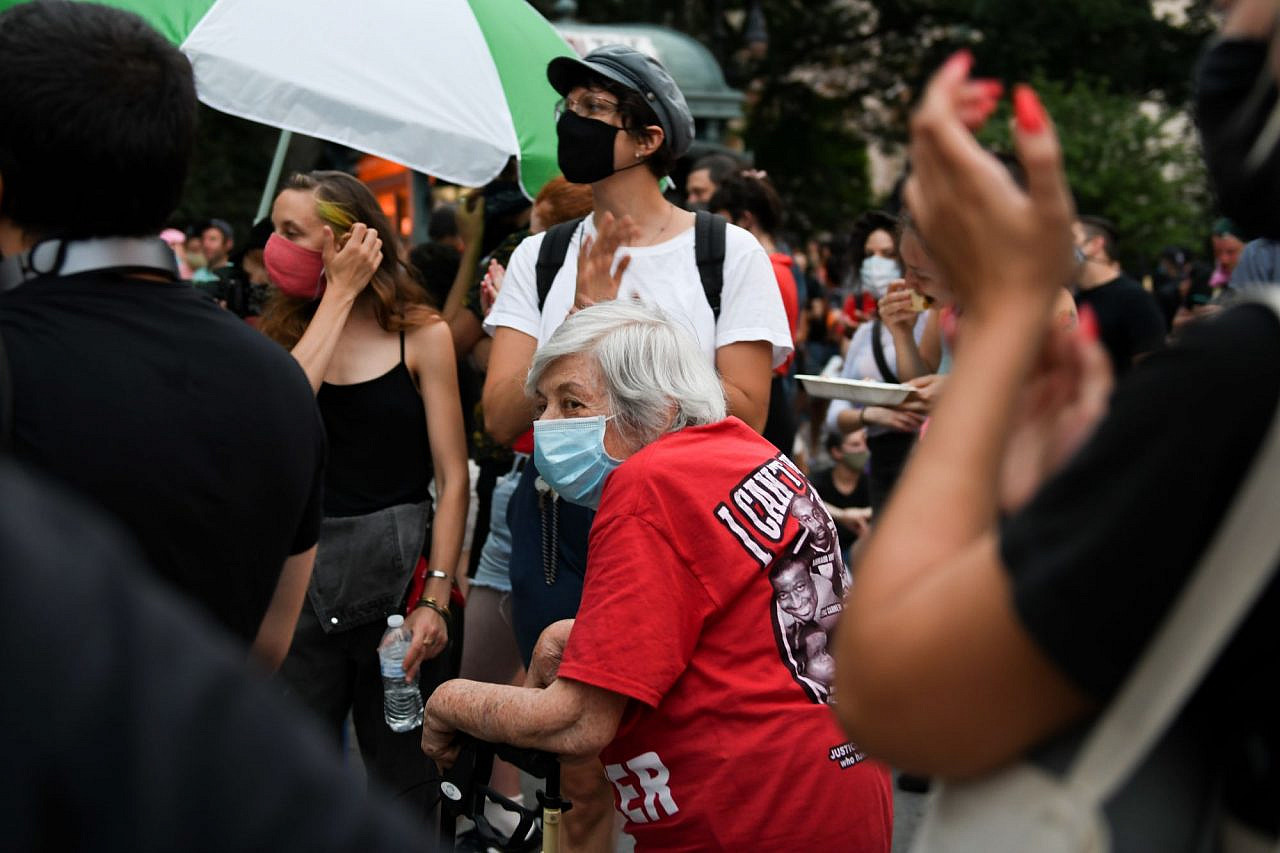 In the 1970s, there wasn’t an anti-Zionist Jewish movement tens of thousands of people strong to welcome Shatzi. But she followed Palestinians who were forging the way, and helped lay the groundwork for Jews to stand in solidarity with them. She got involved with the Palestinian Solidarity Committee, organized by Palestinian scholar and activist Dr. Rabab Abdulhadi, taking charge of the organization’s literature table at events, and juggling crates full of books up and down her third-floor walkup. She held workshops on Palestine at the Michigan Womyn’s Music Festival before it eventually shut down, having shrunk to irrelevance because it refused to include trans women.

Shatzi, on the other hand, was part of a leading edge in the women’s movement that was constantly evolving, including by challenging Zionism and recognizing trans people’s invaluable contributions to the movement. Shatzi doggedly worked to politicize other Jewish lesbians, writing in an op-ed in a 1986 issue of WomaNews that “Jewish women in particular need to educate ourselves about the history of Zionism.” She and her Jewish lesbian circle marched in Pride as Radical Jewish Lesbians Organizing, and Shatzi’s enormous sign read “Jews for Palestinian Self-Determination.”

In the last six years of her life, as JVP-NYC became her political home, Shatzi’s effort to work out her newest role in the movement turned out to be a collective project that required a loving, multi-generational political community. In the summer of 2020, Shatzi had a profound impact on young people by showing up with other JVP members to innumerable marches during the Black-led uprisings against police violence. That an 89-year-old joined us in the streets, day after day, especially during the early days of COVID-19, symbolized to so many that it was possible, and in fact necessary, to stay in this struggle for the long term. As JVP organizer and Shatzi’s close friend, Elena Stein, said in remarks honoring Shatzi after her death, Shatzi’s legacy makes “a case for love in organizing.”

Shatzi’s power was exponentially amplified by the devoted work of another friend, JVP-NYC member-leader Eliza Klein, who created and collaborated with Shatzi on the Twitter account The People’s Bubbie, through which she emboldened thousands of people across the world by sharing her story. Two of the now-iconic signs she carried with her to actions read “Jewish dyke standing with Palestinian queers,” and “This 90 year old Jew says Zionism is genocide,” and she went nowhere without her rainbow flag. She made it clear that the struggles to which she devoted her life were not only interconnected, but inseparable.

Our movements require lifetimes, just as Shatzi modeled. Many Jews in the Palestine movement have the option, unlike Palestinians, to decide the work is too hard and to stop showing up. I personally avoided confronting Zionism for years out of fear of alienation and anger from my family. I didn’t come out as anti-Zionist until I had come out as trans and had experienced familial rupture that lowered the stakes of a political coming-out. Shatzi and the other elders in my community help me keep making the choice to be part of this movement, through the heartbreak and horror. Shatzi didn’t just give me a model of what it looks like to keep going. She gave me and so many others — especially young, queer, anti-Zionist Jews — the deeply sustaining gift of finding loving elders and not just losing them. 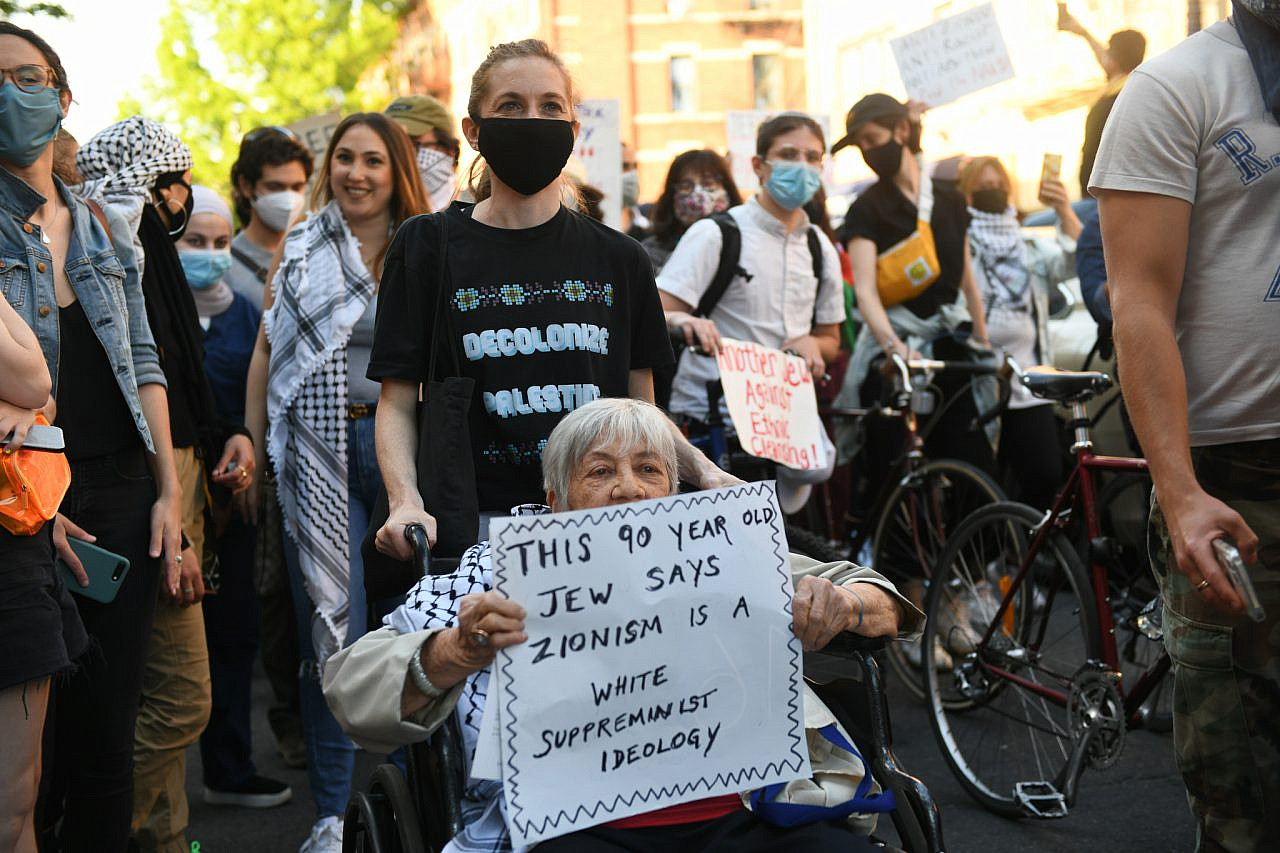 I watched Shatzi push her walker at the front of the crowd in multiple actions in solidarity with the historic Palestinian uprisings in May 2021, chanting and holding up her sign. I remember wondering at her seemingly inexhaustible reserves, at age 90. Shatzi said once that “just voicing opposition or even just going to demonstrations is not enough. For me, becoming an activist was building a movement.” The fact that building a movement is precisely what she had a part in is, I think, what buoyed her.

I believe that Shatzi felt, until the end of her life, that she was playing her part to its fullest, in something much bigger than her. She understood that the transformation we are longing for is not accomplished by any one individual or any one generation, but is co-created by those who came before us, those who are here with us, and those who will come after us, all playing our interconnected parts. When I remember that, I feel unstoppable.

Correction, Jan. 16, 2023: A previous version of this article referred to the Palestine Defense Committee. The organization is called the Palestine Solidarity Committee.

Theo Rehm is a member of JVP-NYC and an organizer for Reparations.