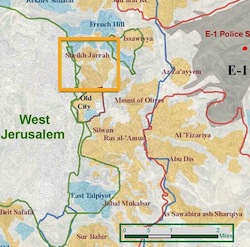 History of the neighborhood

Sheikh Jarrah is a Palestinian neighborhood in East Jerusalem, located on the slopes of Mount Scopus, home to about 3,000 residents.

In the 19th century, a small Jewish community lived there, most of which left by 1948, as East Jerusalem came under Jordanian rule. In 1956, 28 Palestinian families who were made refugees from West Jerusalem in the 1948 war were settled there through an agreement reached between Jordan and UNRWA.

In recent years, several of these families were evicted as a result of Israeli court decisions to recognize pre-1948 ownership claims made by two Jewish bodies, the Sephardic Community Committee and the Knesset Israel Committee, which enabled Jewish settlers to move into their homes immediately.

Although implemented according to Israeli legal and justice systems, the move set a political double standard that justifies Jewish claims to property held before 1948, but does not allow Palestinians to make similar claims to properties they were forced to leave in West Jerusalem. 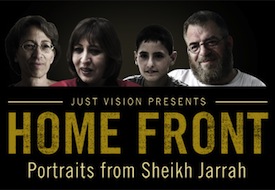 WATCH: Just Vision presents a series of video portraits on the struggle for justice in Sheikh Jarrah.

In the summer of 2009, following the eviction of the Rhawi and Hanoun families from their homes, which were immediately then inhabited by Jews, a few dozen Israeli and international activists came to the neighborhood to be with the families and demonstrate.

Soon, growing numbers of protesters joined, and by the end of 2009, the Solidarity Sheikh Jarrah protest movement emerged as the organizing body of Israeli activists coordinating weekly demonstrations with the Palestinian residents of the neighborhood.

As the movement grew, the Jerusalem Police began to use force against the protesters. The police refused to issue permits for the demonstrations, and repeatedly arrested non-violent activists on a weekly basis.

In January 2010, 15 people were arrested during a protest in Sheikh Jarrah, with some of them held for two days before seeing a judge. The Jerusalem Magistrate’s court ruled there was no pretense for arresting the activists, and the police was forced to recognize the legality of the protests. However, they limited the location of the protests, pushing them back away from the houses to the Sheikh Jarrah Park.

At their height, the demonstrations in Sheikh Jarrah drew thousands of Israelis, including many first-time activists. The movement successfully placed Israel’s policies of settlement expansion in the heart of East Jerusalem in the spotlight.

After two years of regular Friday demonstrations, the Solidarity Movement announced in September 2011 that it would cease organizing protests in Sheikh Jarrah and focus its activities in other locations; activists promised to return to the neighborhood in case of further evictions of Palestinian families.

Photos by ActiveStills, March 2012
A retrospective in images of three years of joint Jewish-Arab protest against the eviction of Palestinian families in Sheikh Jarrah. Read more.

What happened to the protests in Sheikh Jarrah?

By Mairav Zonszein, March 2012
Two and a half years after the emergence of the protest movement that was celebrated as the birth of “a new Israeli left,” a handful of demonstrators come to the Sheikh Jarrah each Friday. Many activists have moved on to other places, and local Palestinian residents fear the future. Read more.

By Noam Sheizaf, June 2011
A video captures a Jerusalem Day march through the city’s Palestinian neighborhood that is filled with racist chanting and intimidation. Organized and promoted by the Jerusalem municipality, the march was escorted by Jerusalem police, who did nothing in the face of blatant hate speech. Read more.

By Jerry Haber, January 2011
Those opposing settlement in Sheikh Jarrah due to Israeli strategic interests alone miss the point, writes Jerry Haber. It’s time to make a clear moral argument against the taking of others’ homes. Read more.

By Noam Sheizaf, May 2010
Noam Sheizaf reports on the growing protest movement aiming to stop the evacuation of Sheikh Jarrah’s Palestinians, calling the struggle an inspiration for many Israelis who all but gave up on political activism. Read more.

⇢ What happened to the protests in Sheikh Jarrah?

⇢ Dear editor, I’m giving up my property in Hebron

⇢ What is normal about normalization?

⇢ An open letter of solidarity to Israel’s nonviolent activists