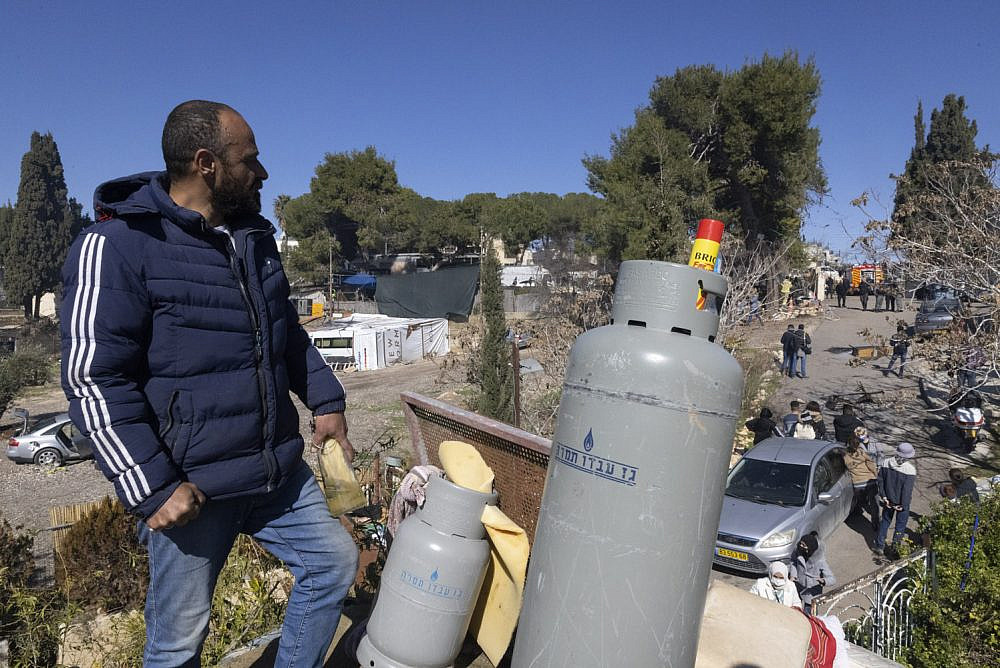 Mahmoud Salhiyeh on the roof of his home just before he and his family were due to be forcibly expelled, Sheikh Jarrah, East Jerusalem, January 17, 2022. (Oren Ziv/Activestills.org)

In a last-minute and partial reprieve, a Palestinian family in the East Jerusalem neighborhood of Sheikh Jarrah averted forced expulsion on Monday, even as Israeli authorities destroyed local businesses located on the family’s land — including a family member’s place of employment.

Israeli police and Jerusalem municipality employees arrived at the Salhiyeh family’s East Jerusalem home at around 8 a.m., two months after an eviction notice gave the residents until Nov. 25 to leave so that their house could be replaced by a school and kindergarten.

When the police showed up that morning, Mahmoud Salhiyeh, along with several youths, secured his family’s home with gas canisters and threatened to detonate them if the eviction went ahead. Reporters began arriving, along with activists and European diplomats; special police forces also arrived alongside firefighters and paramedics, who were preparing for a forceful eviction.

“They can build five schools here and my house will remain,” said Mahmoud Salhiyeh, as he stood on the roof of his house clutching a glass bottle filled with petrol alongside a gas canister. Around 10 teenagers stood with him with more canisters. “We had homes in Ein Kerem, they can’t expel us again,” Salhiyeh added, referring to the Palestinian village whose residents were forced out by Zionist forces in 1948, and which later become part of West Jerusalem. “I’m not leaving, even if I die.” 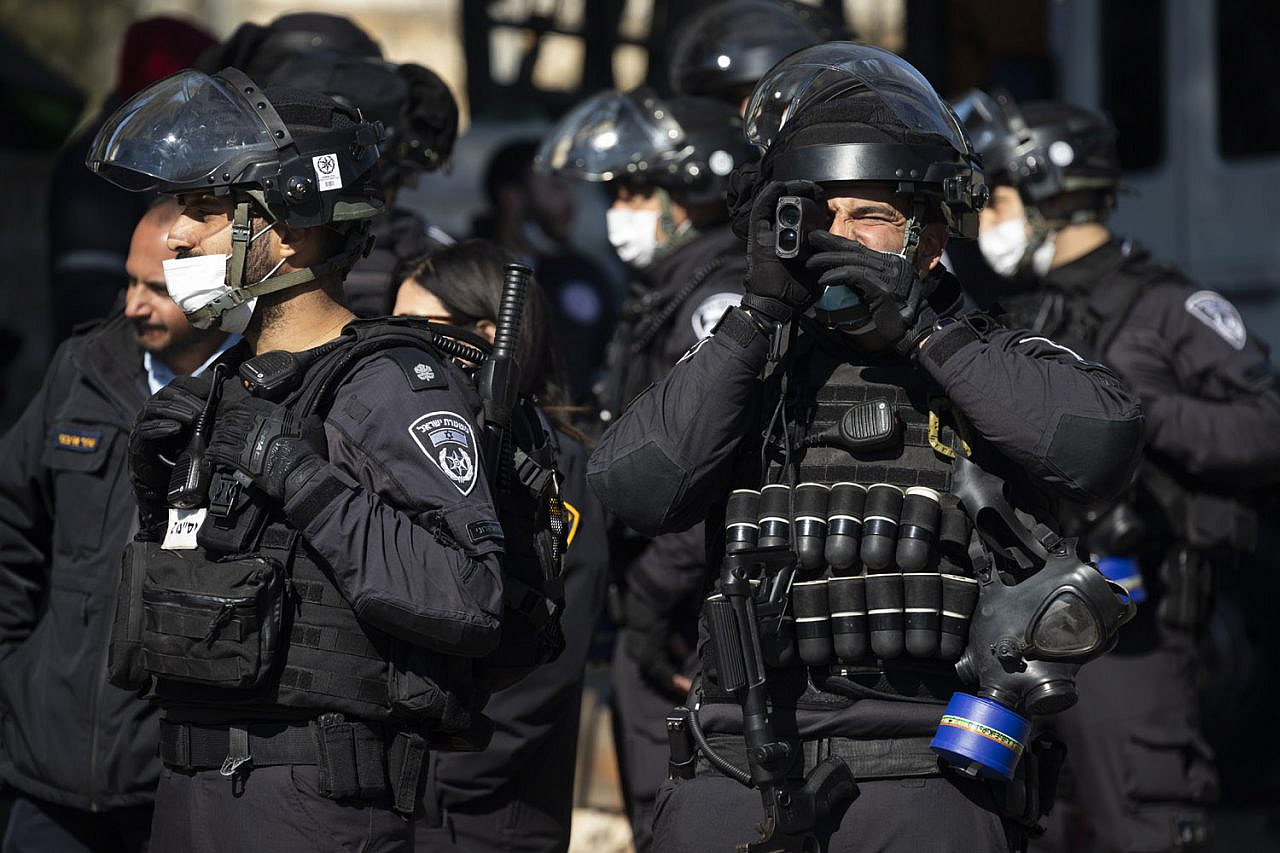 Although the authorities on Monday demolished a plant nursery where Mahmoud works, a plot of land for selling cars, and a hairdresser, the family’s action to defend their house on the day — along with diplomatic pressure — meant they were, for the time being, permitted to remain in their home.

The Salhiyeh family arrived in Sheikh Jarrah not long after they were expelled from Ayn Karem (today Ein Kerem) during the Nakba; back then, that part of Jerusalem was still under Jordanian control. In the 1950s, the Absentees’ Property Law allowed the state to seize property belonging to Mahmoud’s  grandfather that the family had been forced to leave.

“My grandfather had a palace there. The house is still there, with Jews living in it,” Mahmoud Salhiyeh told Local Call in an interview last week. “Let us return to our house there, and I won’t want Sheikh Jarrah.”

The family possesses the deed of purchase of the land in Sheikh Jarrah. The land has not been properly regularized in the Tabu (Israeli land registry), so it is still registered in the name of its previous owners, members of the Palestinian Hilu family. Oddly, although the land has been used as a place of residence for more than 70 years, the neighborhood masterplan, approved in 1984, designated it for public buildings.

In 2017, the Jerusalem Municipality expropriated the family’s land in Sheikh Jarrah for public use.

In the lead-up to the planned eviction, Mahmoud Salhiyeh frantically looked for an alternative apartment to rent for his four children and for his mother. “Standing inside crowded residential buildings in Beit Hanina, I’m suffocating. I don’t know how I will live in a place like this. I will go crazy,” he said last week. 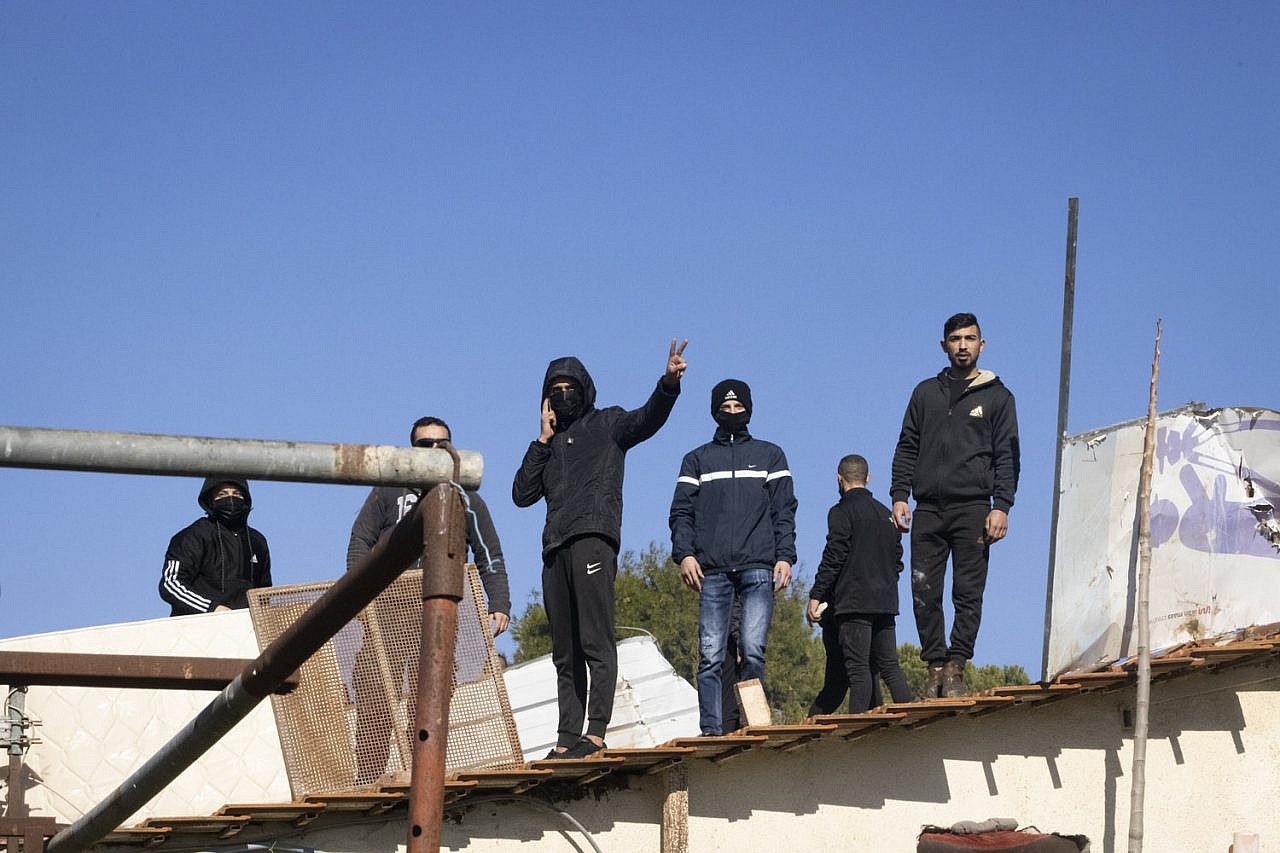 Palestinian youths on the roof of the Salhiyeh family’s home, just before the family was due to be forcibly expelled, Sheikh Jarrah, East Jerusalem, January 17, 2022. (Oren Ziv/Activestills.org)

“There’s no compensation, there’s nothing,” Lital, Mahmoud’s wife and a Jewish Israeli originally from Rishon LeZion, said last week as she packed things for the children. “We will not be evicted, but if police come to expel us, I’m packing so that they won’t throw everything out onto the street.”

Prior to Monday’s standoff, a spokesperson for the Jerusalem Municipality offered the following response: “Since the ruling, the Salhiyeh family has been given countless opportunities to hand over the land willingly, but they refused to do so, even after offering repeated extensions, meetings and attempts to negotiate. Therefore, the Jerusalem Municipality will act as instructed by the court and intends to implement their orders.”

The municipality offered the family the option to rent the house from them on a temporary contract which would be renewed every eight months, and would give the municipality the right to evict the family when it sees fit. The family refused the offer, not willing to live with the constant threat of eviction.

The lawyer representing the family, Ahmad Kadmani, filed a request to delay the eviction order and to overturn the ruling, given the fact that some members of the household were not part of the legal process. “It is unacceptable to evict Mahmoud’s sister and mother when no eviction suit was ever filed against them,” he said. The district court will hear the request next week.

Commenting on the fate of the Salhiyeh family’s home, a source in the Jerusalem municipality’s education department said that the municipality is advancing plans for a special education school and six kindergartens for the Arab public in that area, and that these are intended to “solve the severe shortage of classrooms in the east of the city.” However, he added that the construction is not intended to be carried out over the family homes at this stage, but in the areas adjacent to them, which is also reflected in the map of the municipality’s plan for building the school. In light of these facts, it is not clear why the municipality insists on evicting the family from their home. 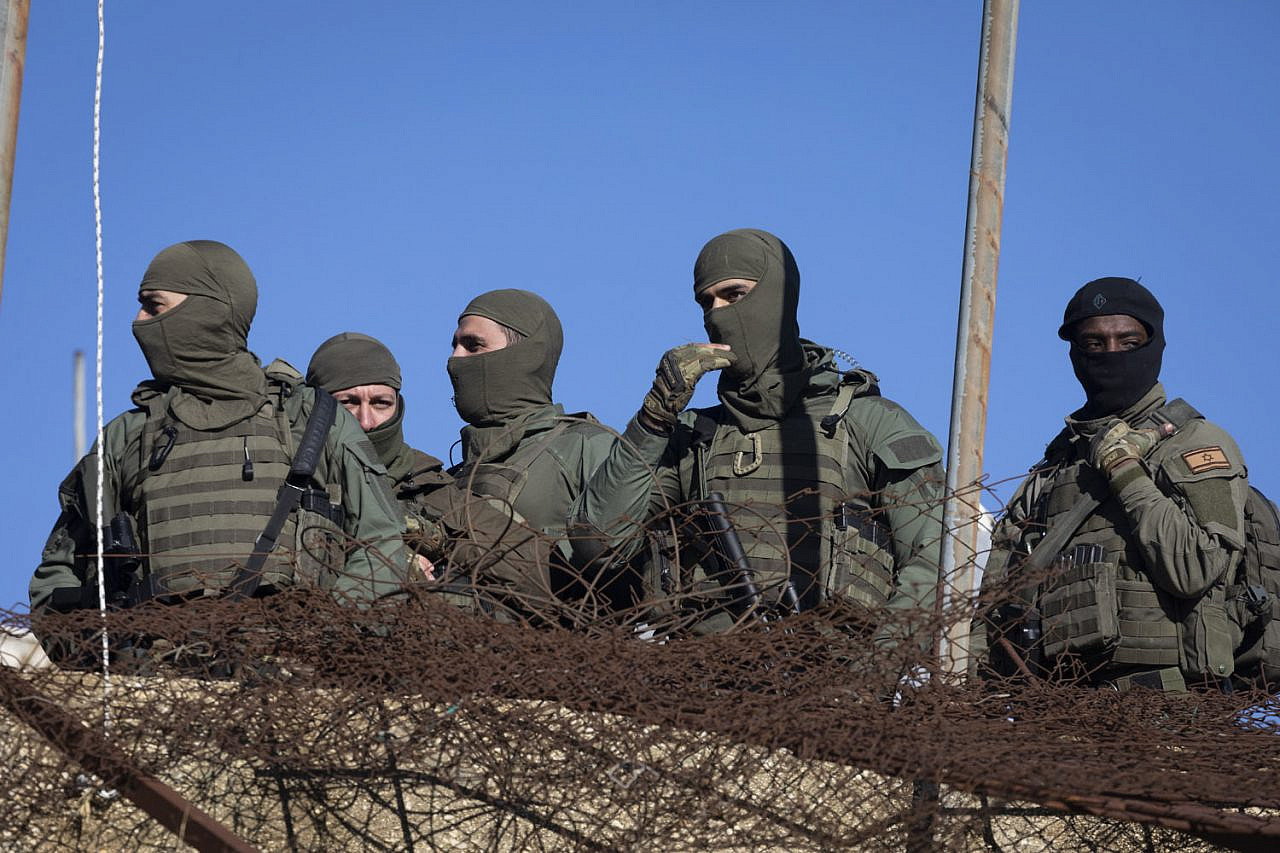 Israeli forces at the Salhiyeh family home as nearby demolitions were underway in Sheikh Jarrah, East Jerusalem, January 17, 2022. (Oren Ziv/Activestills.org)

In addition, there are alternative locations for the establishment of educational institutions in the neighborhood, which do not involve the eviction of Palestinian families. There is, for example, an empty lot on nearby Pierre Van Paassen Street, which is set out in the masterplan as being for public buildings. However, in an unusual move, the municipality decided to give up this land and hand it over, without compensation, to the ultra-Orthodox organization Ohr Somayach, which plans to establish a yeshiva and dormitories for students.

This month, the NGO Ir Amim appealed to the education department, demanding that the municipality use this plot to establish the educational institutions in the neighborhood, as an alternative to using the Salhiyeh family’s plot. This is legally feasible: according to the permit contract with Ohr Sameach, the Jerusalem Municipality can reclaim the use of the plot.

“This is a particularly cynical act by the municipality,” said Aviv Tatarsky, a researcher at Ir Amim. “The municipality is threatening to evacuate the Salhiyeh family, while at the same time giving up another plot of land and gifting it to a yeshiva. The municipality is succeeding in making even the obligation to provide education to the Palestinian population into part of the mechanism of dispossession and Judaization.”

“They’re creating rage in my children, in an entire generation of Palestinians. Why?” asked Mahmoud Salhiyeh last week. “I think everything is led by the municipality, from above. Aryeh King, the deputy mayor, says openly that he wants to throw the Palestinians out of here. What’s the problem with establishing a school and leaving us our home?”

‘They want to silence us’

Throughout Monday morning, it seemed that a wall of police officers with ladders, shields, and fire extinguishers was preparing to break into the house and dismantle the fortifications. But then a municipal representative arrived who tried to persuade the family to put an end to the standoff, noting that the plans for their land did not include the building of a school on the exact spot where the house stands. He agreed to guarantee that they would not be evicted that day, but would not make any commitments regarding the near future.

“We need to come to an understanding between people,” the representative told Mahmoud Salhiyeh. “I’ve come to solve the problem… Let’s resolve this nicely.”

“It’s unclear why the eviction was postponed,” said Hagit Ofran of Peace Now, who was at the scene. “Obviously the attention of the public, of diplomats, and of the media has put this issue on the agenda. If the family had not gone up on the roof, it’s likely they would have already been evicted this morning.”

Although the plan is to build a school for Palestinians, the family and activists see the eviction as part of a policy of expulsion in Sheikh Jarrah. “They want to seize the land, it’s part of the municipality’s policy in order to help settlers,” said Salhiyeh. Lital Salhiyeh, his wife, added: “I don’t believe that they won’t come for our part [of the land]. They want to silence us, to bring down those on the roof, but as long as the municipality won’t guarantee the house is ours, we won’t end our defense.”

By the late afternoon, an excavator belonging to the municipality had begun tearing down the large nursery, which was established about 10 years ago, as well as the space designated for car sales. Contractors loaded the nursery equipment onto trucks. 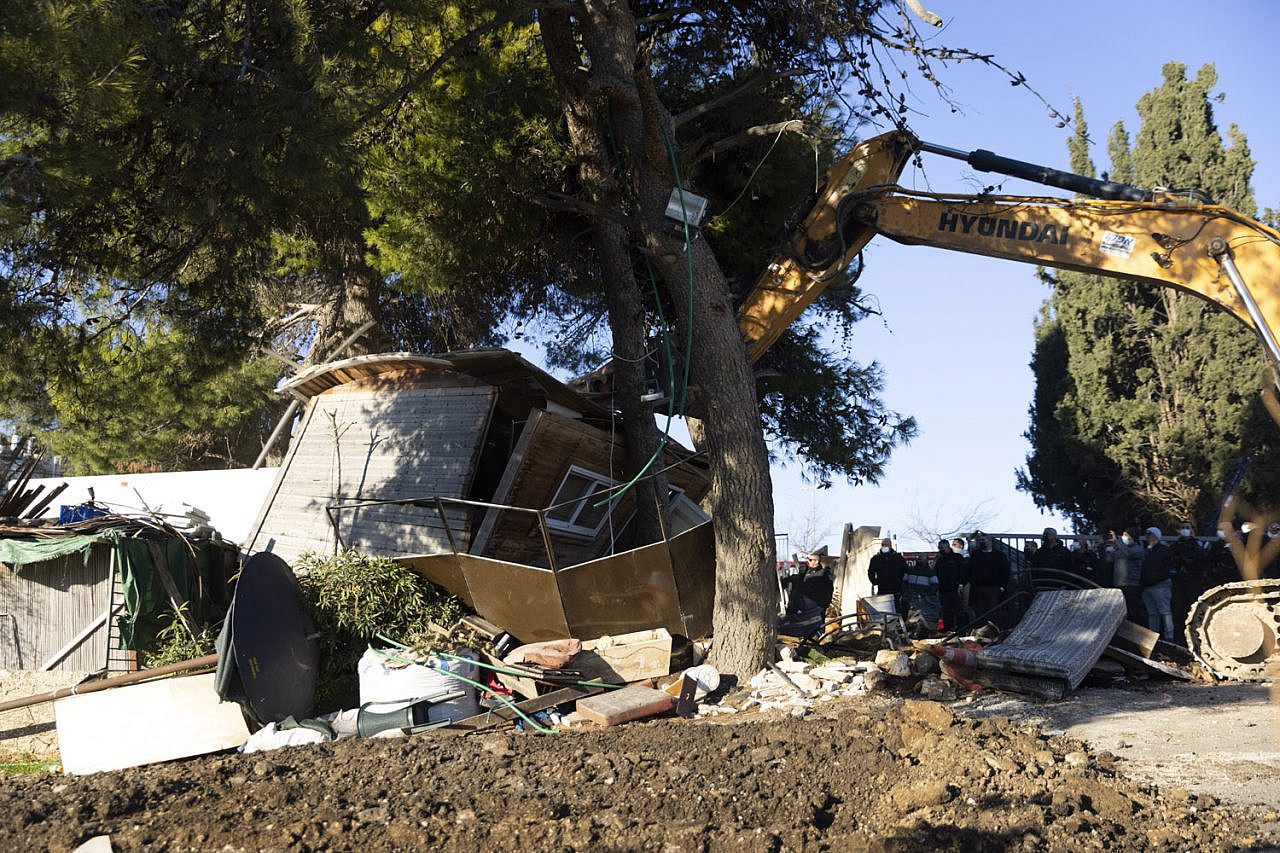 Although several dozen activists had managed to barricade themselves around the home, the police prevented others from reaching the house; instead, they demonstrated at the edge of the compound marked for demolition. Police arrested three activists.

European diplomats, among them Sven Kühn von Burgsdorff, the EU ambassador to East Jerusalem, the West Bank, and Gaza, were also at the scene. The EU Delegation to the Palestinians tweeted it was “imperative to deescalate the situation and seek a peaceful resolution. Evictions/demolitions are illegal under international law and significantly undermine the prospects for peace as well as fuel tensions on the ground.” Dutch Ambassador to Israel Hans Docter, meanwhile, tweeted that the eviction effort is “contrary to international law and risks further escalation,” adding that the Netherlands “calls on the Israeli authorities to stop the eviction immediately.”

Municipality employees erected a high-rise aluminium fence around the demolished structures on Monday, and as darkness fell the excavator finished its work and some of the police forces left the site.

“They promised us they wouldn’t destroy but what good has it done us,” said Lital Salhiyeh as she watched the excavator. “The youngsters here on the roof with my husband — each of them has eviction orders for their family home. The municipality is anti-Arab.”

A version of this article was originally published in Hebrew as two separate pieces on Local Call. Read them here and here.