A new position paper by human rights organization Yesh Din looks at steps being taken by the Israeli government toward the de facto annexation of the West Bank. 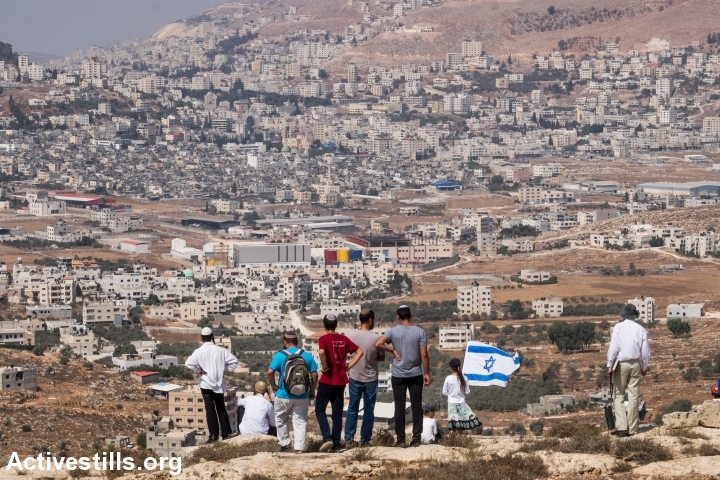 Israeli settlers attempt to establish a new outpost in response to the killing of two settlers the night before, near the settlement of Itamar, West Bank, October 2, 2015. (photo: Yotam Ronen/Activestills.org)

Last week Yesh Din published its position paper, “From Occupation to Annexation,” which deals with the way the Israeli government is implementing the conclusions of the Levy Commission Report without any public debate or even an official government decision — a process which is dragging Israel into de facto annexation of the West Bank, without granting the annexed people their rights.

First, we must distinguish between annexation and occupation. International law recognizes the legitimacy of an occupation, i.e. a state in which one power occupies a territory where a local population lives. But the assumption of international law is that occupation is a temporary affair; the occupier is considered to be a trustee who maintains what he has conquered until the conflict is over. Furthermore, the occupier is not allowed to make long-term changes in the region. Annexation is a unilateral takeover by a state of a territory by use of force or threats of it, and is impermissible under international law — a result of lessons from the Second World War on which so much of international law is built.

The new position paper does not deal with the Levy Report itself (to which we dedicated a whole report of its own) but rather with its implementation. Nevertheless, we must say a word about the report itself: it is nothing less than a revolution in the how the State of Israel has come to regard the occupied Palestinian territories. According to the report, the state’s legal position is that the occupied Palestinian territories are not occupied, since they were promised to the Jewish people by the British Mandate.

The Israeli government never officially adopted the Levy Report. Prime Minister Benjamin Netanyahu appointed Levy (former minister Silvan Shalom noted the prime minister knew precisely why he was appointing him) but never dared to officially adopt his document. Why? To begin with, the present situation of occupation is actually good for Israel. It confers partial legal legitimacy to its military presence (not its civilian presence) in the West Bank. If the West Bank is not occupied, then the situation looks suspiciously like annexation. And as we noted earlier, annexation is prohibited.

But even though the government never officially adopted the report, it effectively began implementing it. On the legal front, the Foreign Ministry published a document in late 2015 that adopts the spirit of the Levy Report. According to the document, Israel has a right to build settlements, based on the British Mandate charter. This claim became part of the Foreign Office Cadet Training Program and was distributed to every Israeli delegation in the world, accompanied by a directive saying this is the Israeli position and that it should be translated and published on the website of every delegation.

The Justice Ministry also adopted the spirit of the Levy Report and its position vis-à-vis the legality of illegal construction in the settlements and outposts, particularly when it relates to the possibility of future legalization.

At the same time, on the more practical (if long-term) side, the Justice Ministry began carrying out one of the report’s recommendations: it began creating a new court to deal exclusively with issues related to land in the West Bank. This court will only include Israeli judges, as it will likely be a military court. The meaning for a Palestinian who wants to protect his property will be clear: don’t waste your time. Palestinian trust in the Israeli military courts is already low and is in decline.

But the more immediate aspect of the Levy Report, which was also noted by Justice Minister Ayelet Shaked, is the retroactive legalization (in Hebrew, “kosherization” — turning something impure into something kosher) of the illegal outposts in the West Bank. Some 80 out of around 100 outposts are built, at least partially, on private Palestinian land. As such they are illegal intruders, and in addition most of the buildings have been served with demolition orders due to illegal construction. Until recent years the government did not bother to enforce its own orders, telling the courts that the buildings are in fact illegal and that they would be demolished at some future date, and according to its own preferences. This happened only in the relatively few cases in which an appeal was filed against the illegal construction. As for illegal construction that did not make it to the courts?  The government had no plan of doing anything about it.

The government has changed its position since the report was published: now it tells the courts, time and again, that those same outposts are intended for legalization. True, even in the past the government delayed the evacuation until the arrival of the messiah, but at least it stated its intent to evacuate them. Not any more.

In order to legalize the outposts, the Netanyahu government has taken two main steps. In July 2015, Netanyahu ordered the creation of a “re-organizing committee” — a governmental team whose goal is the purification of the impure through “re-organizing” the legal situation vis-à-vis land, thus granting a legal cover for the outposts. This team is supposed to finish its work in the coming weeks. Needless to say, changing the rules in order to create settlements in the West Bank is a violation of international law. But international law is for the gentiles — we have the Balfour Declaration.

The second tool used by the Netanyahu government is the “re-ordering law.” This law is supposed to force the Palestinian owners of land to accept compensation for giving up their legal rights to the land they own, so as to prevent the evacuation of outposts and illegal structures. The Netanyahu government believes in private property, unless the person in question is Palestinian. The “re-organizing” law is an attempt to turn the Levy Report into legislation. The bill, as presented by MK Yoav Kish, specifically names four settlements and outposts whose evacuation or partial evacuation was ordered by the High Court of Justice. Such a law, were it to pass, would lead to land confiscation not intended for pressing military needs — an act prohibited by international law. In addition, the law itself is a declaration by the Knesset that it has the right to pass legislation regarding the West Bank — a sign of annexation. It is an acceptance of the Levy Report’s position that the laws of occupation are invalid in the West Bank, and that the territory is under the sovereignty of the Knesset.

Beyond all these tricks, the purpose of which is to prevent the evacuation of Israeli land invaders, the government is busily working on enlarging the pool of state land, in a way that will permit the enlargement and legalization of outposts. This is done under the so-called “blue line team” – a team whose duty is to examine and fine-tune the boundaries of land that had previously been turned into “state land.” Between 2012 and 2015, state land in the West Bank grew by 63,771 dunams; state land is not allocated to the Palestinian communities in the occupied territory, as might be expected of an occupying force that obeys its legal obligations. Instead, most of it goes to the settlements and outposts. According to the data supplied by the government, the Civil Administration allocated only 7 percent of state land for Palestinian use.

And these are only a few of the examples presented in our position paper. When it comes to dispossessing Palestinians of their land, the Netanyahu government and its jurists are showing impressive creativity. The final result of all these processes is the creeping, de-facto annexation of large swaths of the West Bank. Beyond the fact that this is in direct contravention of international law, it is all happening without any public debate. After all, it’s taking place behind closed doors by committees whose work is anything but transparent, let alone open to public criticism. Most of the time we only hear of it after they have made their decision.

Contrary to what is often said, the Netanyahu government does have a policy in the West Bank. It simply prefers you don’t hear of it. So here it is.