Israel’s security service publishes notices in the Palestinian village of Beit Omar threatening to revoke work permits from families whose children are suspected of stone throwing. 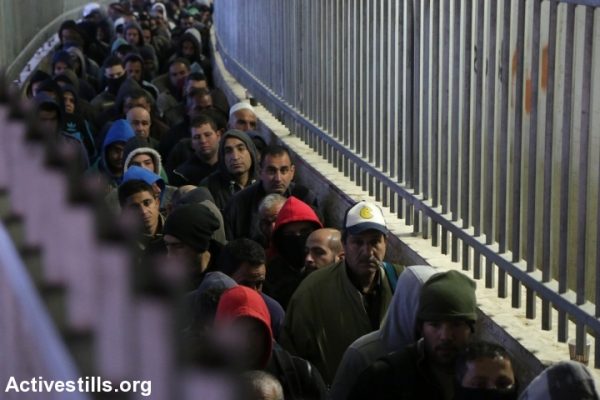 Palestinian workers squeeze themselves to pass through the Israeli checkpoint of Bethlehem while heading to their work in Israeli cities, Bethlehem, West Bank, March 19, 2017. (Ahmad Al-Bazz/Activestills.org)

Residents of the Palestinian village Beit Omar in the West Bank discovered last week that the Shin Bet, Israel’s internal security service, had posted threatening notices on their homes and businesses. The notices, published in Arabic and signed by a Shin Bet agent known as “Captain Amar,” threaten to revoke work permits from families whose children are suspected of throwing stones.

As you know, a large portion of the breadwinners in the town have work permits that allow them to travel inside the Green Line. These permits allow the families to live with dignity, to maintain their health, to build, to get an education, and to cover the various, heavy costs of living.

We support anyone who tries to make a living by the sweat of their brow. On the other hand, it is senseless to stretch out our hand and provide you a place of work, while discovering that your son is throwing stones or Molotov cocktails on the main road, which is used by both Israelis and Arabs. Stone throwing is more than a crime, it is attempted murder.

Therefore, there is no forgiveness regarding the fact that it is your duty as a parent to keep an eye on your child and make sure they do not disturb the peace — it makes no sense that you do not have control over him — in order to ensure their education and your family’s livelihood.

You should know, should we revoke your work permit, that we are not to blame.

Additionally, as a gesture of goodwill on our part, we have decided to look into the possibility of forgiving all those who ask to have a rescinded work permit returned, and we invest all we can in the matter.

We will dedicate a special day for submitting these requests with the beginning of the new year, on January 1, 2018 at 9 a.m.

We wish you all a happy new year.

The kind words do not make the notices any less threatening. The village residents know Captain Amar, as well as his colleagues in the Shin Bet, quite well. This is the everyday life of villagers living under perpetual collective punishment, including frequent night raids, arrests, tear gar, checkpoints, closures, and pressure to inform on neighbors, family members, and acquaintances to the occupation authorities.

A Shin Bet notice, posted on homes and businesses in the Palestinian village of Beit Omar, threatening to revoke work permits from Palestinians whose children are suspected of stone throwing.

We reached out to the Shin Bet for comment, specifically about the impetus for the threats. We also asked if the Shin Bet has a policy of punishing parents whose children were allegedly involved in “riots” by taking away their livelihood. We will publish their response if and when it is received.